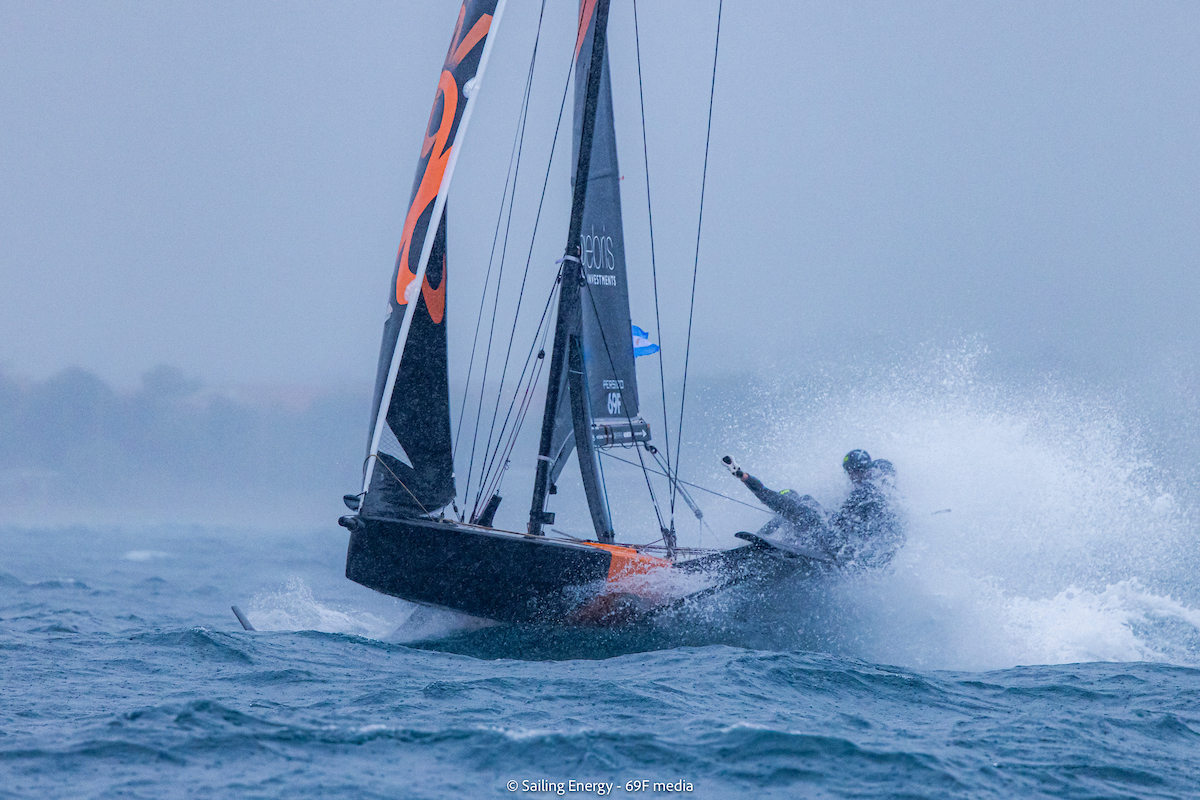 Act 3 of the Youth Foiling Gold Cup came to a close on Sunday in Cagliari with an action packed final race that saw DutchSail, Team Argentina and Team France on the podium.

With only one race held today, the finals of the third and conclusive act of the YFGC came to a close after an event which began with qualifying rounds on October 21, before moving on to knockouts and then three days of racing in the finals.

With 18 knots of wind from the south, gusts of up to 20 knots and poor visibility, the teams managed to complete just a single race on the usual quadrangle course, this time with an upwind start. At the conclusion of the first race, the race committee decided to send the fleet back to the docks, deeming that the poor visibility would make continuing with the schedule unsafe.

Dutchsail – Janssen de Jong therefore took the victory after a run of impeccable racing throughout the series. Second place went to Team Argentina, whose development over the course of the event has been extraordinary, culminating in a textbook final race.

Dante Cittadini from Youth Team Argentina said, “We sailed well even in these more complicated conditions. In the warm-up, we capsized, but we quickly reset and figured out how far we could push during the race. At the top mark, we were among the first ones, after Young Azzurra capsized and from there we took the lead.

“We always remained focused on the boat, trying to sail well considering the geometry of the racecourse: in the downwind, we took the layline well and we did only one gybe, reducing the risks. We are very satisfied and from tomorrow we go back to focus on the Grand Final races.”

The crew crossed the finish line 47 seconds ahead of the Dutch team, demonstrating the confidence they have gained in handling the boat in just a short time: gybing perfectly and keeping the boat on the foils even in gusting winds and choppy seas.

“It’s been a super adrenaline day with some top end conditions, with pretty big waves and a southeast strong breeze. We had a lot of fun. It was very difficult to get the boat on the foil around the course. In these conditions, it’s important to keep pushing and, at the same time, keep it safe, because it’s quite easy to go too fast and fly out of the waves, which could end in a capsize.

Today it was super challenging to keep the boat flying nicely, on the upwind and downwind legs, because the waves were really disturbing us. And also during the maneuvers, it was difficult handling properly the boat avoid getting lift on the foils, and crush down. We are already qualified for the Grand Final and we are super focused to do our best. We expect no less from the other competitors.”

Sunday’s race was a difficult one for the French team, who after a good start and leading on the windward leg, went on to capsize and finish in last place, still managing, however, to claim third place in the overall classification.

Young Azzurra maintained their fourth place in the standings, while the female crew of Equal Sailing took no risks today and clinched a third-place finish to ensure their ticket to the Grand Final of the circuit, stealing in just ahead of Switzerland’s Katana Sailing Team.

From tomorrow the crews will start all over again, with the six top qualifying teams across the three acts of the circuit competing in the Grand Final of the YFGC: Dutch Sail and Young Azzurra in Gaeta, Team France and Okalys in Limone, Team Argentina and Equal Sailing in Cagliari.

The winners of the circuit will be awarded a voucher for the entire 2022 season worth €50,000. The teams placing second and third will receive vouchers worth €30,000 and €15,000 covering their participation in two weeks and one week of the Grand Prix circuit respectively.