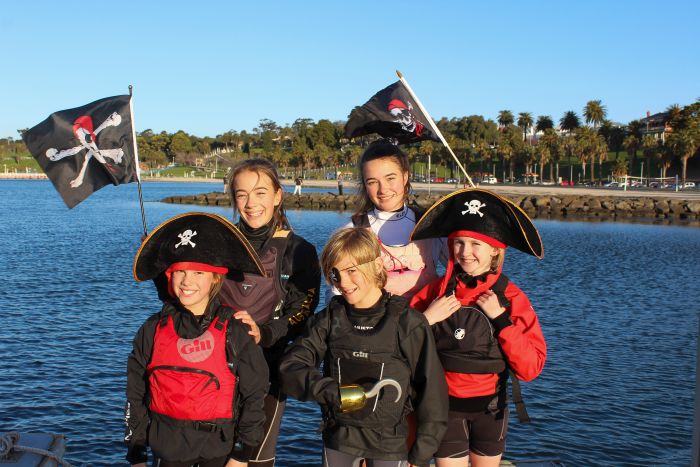 Young sailors from RGYC get in the spirit of International Talk Like A Sailor Day ahead of Springsail. Pic courtesy of Sarah Pettiford - RGYC.

A Rio Olympian, a dual world championship winning coach and a Tokyo Olympics hopeful will pass on their knowledge and expertise to the next generation of sailors in Geelong this weekend.

As many as 150 sailors from around Victoria and interstate will participate in Springsail, a four-day annual event which will be held from September 21 to September 24.

Hosted by the Royal Geelong Yacht Club, Springsail includes a two-day regatta on Corio Bay, followed by a two-day coaching clinic. The racing component is open to all ages with the coaching clinic tailored to school-aged sailors.

Earlier this week at RGYC, a group of passionate young club sailors embraced their inner pirate ahead of today’s International Talk Like a Pirate Day.

All of the sailors are competing in Springsail, one of the Victorian Sailing Cup’s seven local regattas which are focused on building the racing experience of Victorian junior and youth classes.

Milli McDonald, 15, sails with her younger siblings Evie and Bobby and has been sailing for six years. She competes in the International Cadet Class and came fifth in a promotional regatta held in Poland in July.

“I’ve made so many friends sailing,” she says. “It’s a really nice atmosphere. You get to do something different, get out in the sun and there are lots of older role models to look up to as well. It is so much fun.

“I can’t wait for the weekend. This is one of the first events after winter, it is starting to get warmer, there are lots of people coming and it is a great event.”

The RGYC says Springsail is an important regatta on the sailing calendar for the club, as it focuses on introducing the sport to the younger generation.

About 100 boats will be utilised for the competition in a range of classes including Optis, Minnows, Open Bic, International Cadets, 420’s, Lasers, 29er’s and a small mixed fleet.

A panel of five Victorian coaches, some with Olympic and world championship backgrounds, will be honing the skills of the young sailors in boat handling, sailing basics, racing strategies and performance.

Coaches include 2016 Rio Olympian Carrie Smith, who is a 12 time Australian national champion (420 and 470 Class) and head of state coaching for Victoria at Australian Sailing.

Local RGYC Club Coach, Tony Bull, who was named 2014 “Coach of the Year” at the Australian Yachting Awards, will also lend his coaching expertise. Bull, the Australian head coach for the International Cadet Class, has 45 years of sailing experience and is a dual world championship winning coach.

Rhett Gowans, the 2017 Laser Radial Champion who is campaigning towards the 2020 Tokyo Olympic Games, is also a coach.

RGYC Vice Commodore, Stuart Dickson, says Springsail was started by the club 12 years ago and has grown into a significant off-the-beach pre-season regatta and training clinic.

“Springsail provides exciting racing on Corio Bay but it also delivers fun, interactive off-water activities. It is terrific to be able to host such a high calibre of coaches who are happy to share their extensive sailing knowledge and experience with budding sailors.”

The Vice Commodore says the club is focused on further introducing the sport of sailing to younger athletes with events such as Springsail helping them to do this.

“With the waterfront at Geelong’s doorstep, junior sailors are offered an opportunity that not many places offer.

“Sailing is a sport for life. It is fun, promotes a healthy lifestyle and provides you with the chance to socialise while learning valuable skills such as teamwork and responsibility.”

The RGYC holds a number of programs aimed at the youth market. This includes the new Green Fleet (part of the Tackers program), which is an introduction to racing for young children new to sailing. There is also a learn-to-sail program and the newly developed “Out There Sailing” program for youth.

“It is important that we encourage and nurture our younger sailors to take part in the junior programs and to ultimately stay on as members when they turn 18,” the Vice Commodore says.

The RGYC has 85 young sailors (aged under 18). This number is expected to continue to rise.

The Geelong Waterfront Safe Harbour Precinct Project is focused on the future of sailing with plans including a new sailing school and high performance centre.