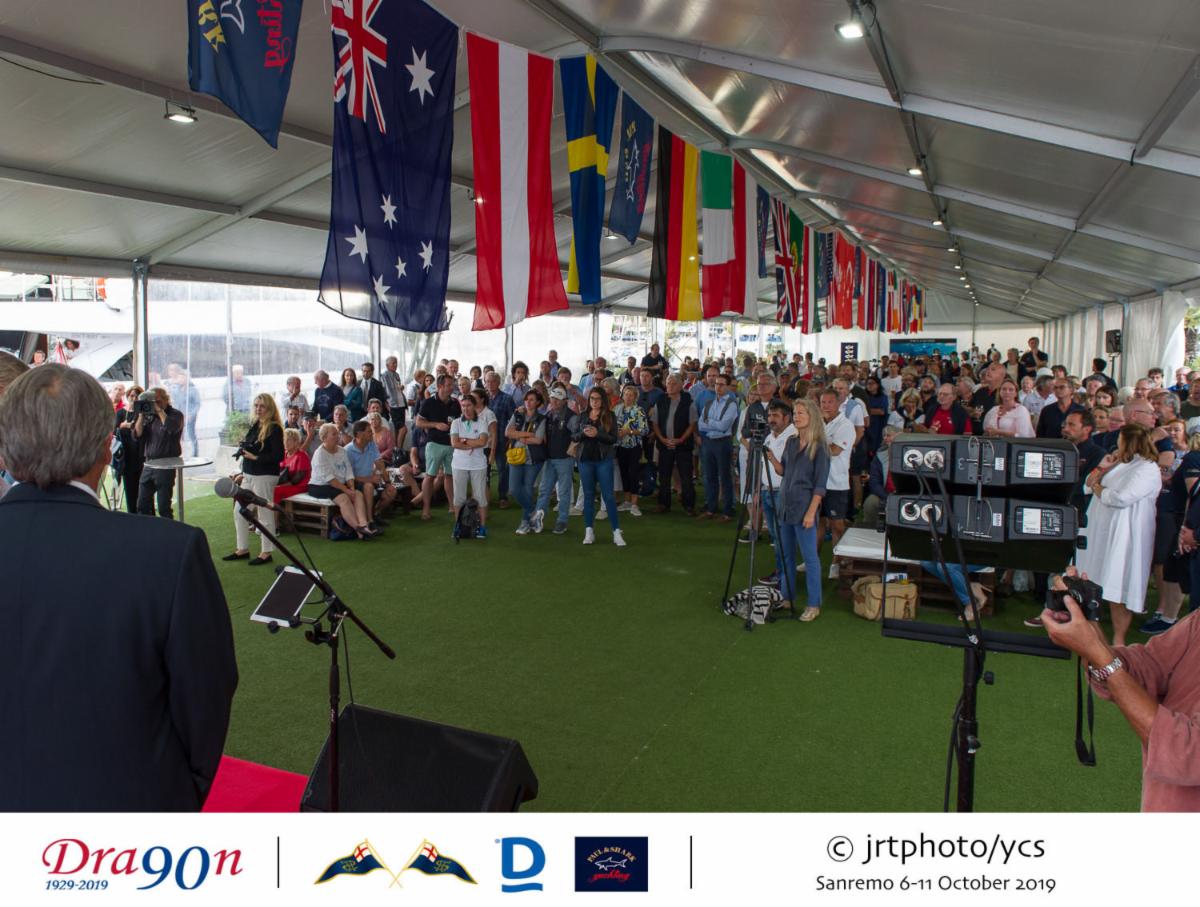 The International Dragon 90th Anniversary Regatta powered by Paul & Shark got underway in spectacular Italian style on Sunday 6th October at the Yacht Club Sanremo in Italy, with a gala opening ceremony at which the 162 participating teams were welcomed.

Dragon sailors and friends of the class have travelled from across the globe for this unique celebration of the Dragon’s illustrious 90-year history, and the regatta is already infused with a wonderful sense of fiesta.

The Italian hospitality flowed freely and featured a host of local Ligurian delicacies such as Brandacujun (a delicious creamed fish dish), and Vermentino and Frizzantino wines, which are so local that the sailors will be able to see the vineyard from the racecourse.

As a live band played and the sun set over the fleet moored around the village in the heart of Sanremo Old Port, it was the perfect opportunity for everyone to relax, soak up the incredible atmosphere and catch up with Dragon friends old and new.

Initially to be split in two groups, the first 30 of the IDA ranking list has been divided between Groups A and B with the rest of the entries being allocated to give 81 boats in each fleet. The two groups will race up to four qualifying races and then the fleet will be regrouped according to their overall positions with the first half of each qualifying group forming the Gold Fleet, and the second half the Silver Fleet.

Yacht Club Sanremo is hugely experienced in running major regattas for large numbers of boats, but even by their standards this is a big keelboat event. The registration and launching of all the boats went exceptionally smoothly and the yachts are now moored on pontoons alongside the regatta village.

The race committee will be operating two separate racecourses in recognition of the large fleet, and there will also be an International Jury to see fair play, chaired by French International Judge Yves Leglise.

“We are happy and proud to host this event which is so much more than just a race, but a real celebration of this boat that made, and continues to make, history in sailing. We want to give our warmest welcome to the 162 teams from all over the world that are joining us in Sanremo.” Yacht Club Sanremo’s President Beppe Zaoli said.

There will be a briefing from competitors at 09.30 and racing will commence at 12.00 on Monday 7th October, with up to two races planned for the opening day. You can follow the regatta at: www.dragon90.com