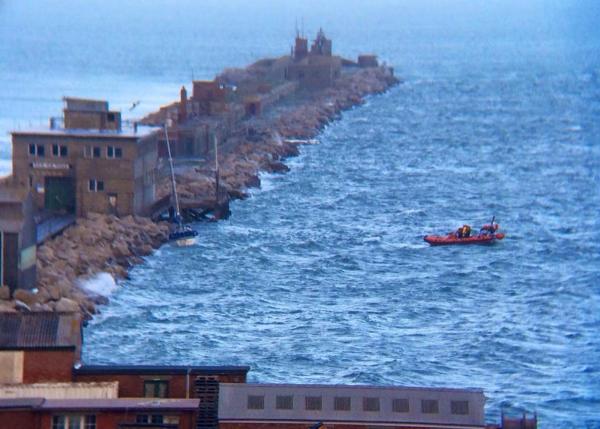 The yacht in trouble off the Portland breakwater. Pic: Wyke CG.

A YACHT escaped its moorings, ran aground and sank off Portland Breakwater.

While heading out on routine training on Tuesday evening, Wyke Reis Coastguard Rescue team spotted the yacht in Portland Harbour. On investigation it was found the yacht had broken its anchor line and was drifting towards the Portland Breakwater.

The Wyke team called the incident into the National Maritime Operations Centre (NMOC) and they tasked Weymouth inshore lifeboat to go out and attend the incident.

A spokesman for the Wyke coastguard team said: “The team kept observations on the boat and confirmed that we could see no signs of movement on the yacht.

“Shortly before the arrival of the inshore lifeboat the boat ran aground on the breakwater. The coastguard team tried to find a break in the horrendous conditions to allow access but were forced to abandon all attempts.”

Continue reading this article at the Dorset Echo.