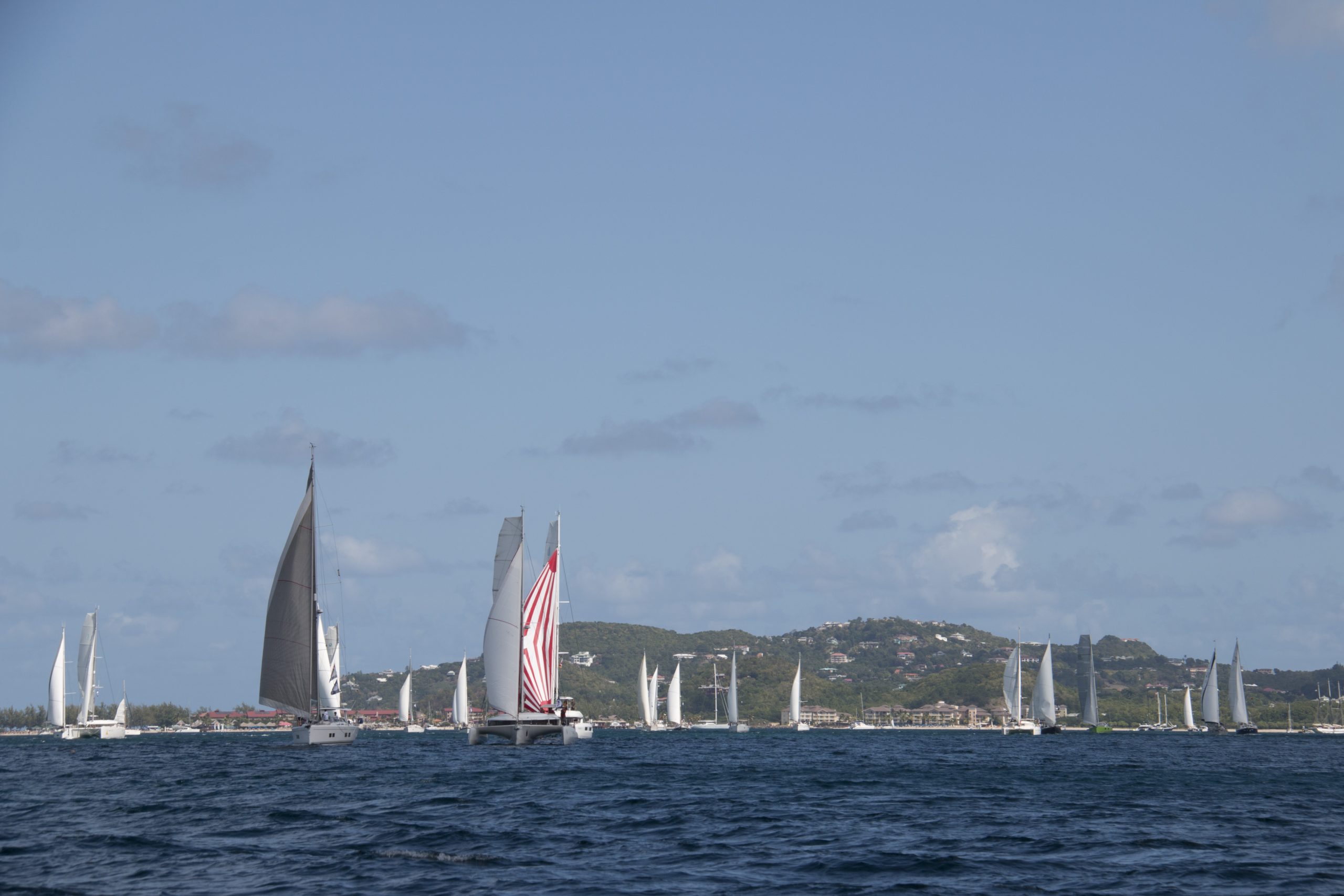 On Saturday 12 January the World ARC 2019-20 fleet set off from Saint Lucia at 12 noon beginning their adventure of a lifetime following years of dreaming, thinking, planning and preparations. Departing were a fleet of 26 yachts from 12 different nations and their gathering out in Rodney Bay made a great spectacle as the first leg of the 9th edition of World ARC got underway. On the docks before departure, World ARC participants wished one another well for the voyage and said their final farewells to the friendly staff of the businesses around IGY Rodney Bay Marina who have helped prepare them for start.

In total 38 boats and over 250 people will take part in World ARC 2019-20; some sailing the full 26,000 miles, and others joining for a part of the route before taking time out to explore further afield then re-joining the next edition of the annual rally. Leaving Saint Lucia were seven boats sailing double-handed as well as six family boats with thirteen children aged from 2 to 16 all eager to begin their adventure. The largest boat is 19.37m Oyster 625 Nikitoo (GBR), and the smallest is 11.98m Nautitech 40 Babsea (AUT). The fleet leaving Saint Lucia included seven catamarans with a further five set to join in future ports showing the growing popularity of cruising on two hulls. Featuring for the first time on the World ARC entry list is a Neel 45 trimaran, Peikea (ESP). The oldest boat is the proven bluewater cruiser Hallberg-Rassy Aurora B (GBR) built in 1996 which already has one circumnavigation under her keel, whilst there are seven boats launched within the last 12 months. A varied fleet as ever but these differences will lose relevance over time as all crews get to know one another better and enjoy this experience exploring the world together.

Weather conditions on the start line were very favourable for the fleet and indeed described as 'near perfect' by meteorologist Chris Tibbs. Sunny skies and steady 10-15 knots easterly breeze blowing off the land created patches of stronger and lighter winds in the bay as the yachts prepared for the start.

Although World ARC is a rally not a race, friendly competition was already evident as leading the way across the start line was the German-flagged Hanse 575 Seaside (DEU) closely followed by Jopie Helsens' colourful cruiser Sky (USA) and Australian catamaran Resolute II (AUS). The rest of the fleet followed in close succession leaving Rodney Bay keeping the Barrel 'O' Beef to starboard and then making their way along the coast down to Castries. On reaching the mark, the fleet gybed away from the Caribbean island which has hosted the start of their adventure raising their downwind sails to make the most of the glorious trade winds.

The start marked the end of a varied programme for the World ARC crews in Saint Lucia including social evenings and pre-departure seminars. The programme would not be possible without the support of several local organisations including the Saint Lucia Tourism Authority, the Events Company of Saint Lucia, IGY Rodney Bay Marina and the Saint Lucia Yacht Club.

“The crews have had a busy and enjoyable programme in Saint Lucia whilst getting ready for the start of this amazing adventure.” said World Cruising Club Managing Director Andrew Bishop. “They represent different nationalities, ages, motivations, and crew dynamics, and so in between the serious preparations such as safety checks, seminars and briefings, this week has been about getting to know new cruising friends, who'll be together for the many months ahead. The start from Rodney Bay was a spectacular end to that programme and beginning to their sailing adventure with World ARC.”

Next stop for the fleet will be Santa Marta Marina on the Caribbean coast of Colombia. The stopover is one of the most popular on the World ARC route, with plenty of good food, exceptional beaches and warm hospitality awaiting their arrival. They can expect good trade wind conditions along the way with occasional and isolated squalls typical of ocean sailing. The boats should start to make landfall from Thursday 17 January. Their progress can be followed online via the Fleet Tracker on the World Cruising Club website.

It is still possible for boats to join the World ARC fleet in Australia in late August 2019 for the Indian Ocean crossing to South Africa, and onwards to the Caribbean. This route keeps well away from areas of hostility, and allows the participants to enjoy experiences as diverse as the remote atoll of Cocos Keeling and the great animals of South Africa.
World ARC sets sail from Saint Lucia every year and so far 21 yachts are set to join the next edition of the rally departing from Rodney Bay, Saint Lucia in January 2020.