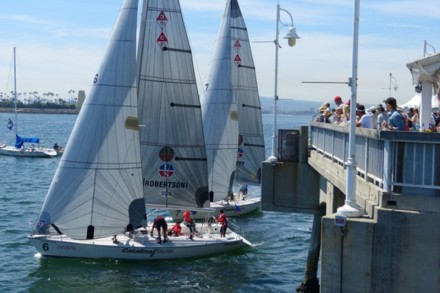 Under the World Tour’s new event format launched earlier this year, the top six placed skippers from the Ficker Cup (8-10 May) will be awarded points to the 2015/16 World Championship leader-board. The top two Ficker Cup skippers will also qualify for places at the following week’s opening World Championship Tour Event, The Congressional Cup (13-17 May), this year celebrating its 51st edition.

The three-day Ficker Cup Trophy was established in 1980 by LBYC to honour Bill Ficker, winning skipper of the 1970 America’s Cup and Star class Champion.

“It’s something I’ve always wanted to compete in,” said Steele, of the Ficker Cup; “and the chance for a spot in the Congressional Cup is a bonus. I’ve raced against some of the guys on the entry list before, and the competition is good. But with the guys we’ve got on board, I am more than comfortable we’ve got a good chance.”

A series of double round robin matches will begin the Ficker Cup on Friday 8 May off the Belmont Veterans Memorial Pier, one of the best known and original stadium sailing venues. The top four competitors will progress to the semi-finals with the finals on Sunday 10 May.

“We’re looking forward to an exciting regatta, with these up-and-coming match racing skippers,” said Camille Daniels, who is co-chairing the event with Mary Voight. “The racers will receive the on-the-water excellence and hospitality LBYC is known for worldwide, and in return, we get thrilling, world-class match racing, right in our own backyard! I encourage the public to come watch the action – it’s free – and cheer on this lively competition.”

Host organiser LBYC will step up another notch from 13-17 May when the world’s top-ranked sailors come to Long Beach to compete in the 51st Congressional Cup regatta. An all-star line-up has been confirmed for this World Championship opener of the World Match Racing Tour's 16th season.