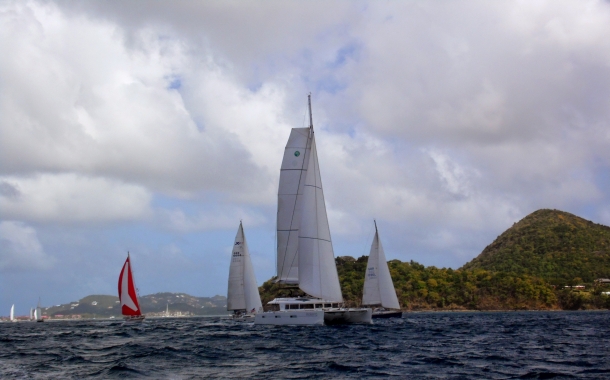 Start of the World ARC 2015 in Saint Lucia. Photo WCC.

Saturday 10th January marked a special day in World ARC history as two fleets set sail as part of new annual editions of World Cruising Club's round-the-world rally. In the rally's Caribbean home port of Saint Lucia, the World ARC 2015-16 fleet began their 15-month circumnavigation, whilst in South Africa the seasoned adventurers of the World ARC 2014-15 fleet re-started after a two month break for their final ocean leg towards Brazil via Saint Helena. The excited atmosphere of intrepid cruisers eager to set sail was echoed across the different hemispheres and in both Rodney Bay and Cape Town, crews of each fleet have enjoyed a week-long organised preparations and social programme to settle them into rally life.

The Adventure Begins:
Conditions for the start in Rodney Bay were excellent with a consistent 15 knots easterly breeze blowing across the start line. The fleet then followed the west coast of Saint Lucia towards a turning mark off the port of Castries, the island's capital. It was a great sight for spectators ashore and the crews on board as the boats sailed out into the Caribbean Sea, with Saint Lucia's coastline as a backdrop.

As he was preparing to leave Rodney Bay Marina, Eric Fable owner of Luna Quest said, 'I have been thinking about a circumnavigation for over fifty years. I feel I am now all prepared for a great adventure, and like the other crews, it is something we've been wishing to do for long time. The day has come to be setting off together.'

The boats sailing with World ARC 2015 will take around 5 days to reach the Marina Santa Marta on the Caribbean coast of Colombia. They will be breaking new ground for the rally as it is the first time that the event has visited the South American port that is rapidly becoming popular with bluewater sailors as a comfortable base for discovering the dramatic landscape and pre-Hispanic heritage of the region.

In total 25 boats and over 100 people will take part in World ARC 2015-16; some sailing the full 26,000 miles, others joining for a few stages. The largest and newest boat is 18.90m Lagoon 620 Makena (USA) and the smallest is 11.80m Rival 38 Luna Quest (GBR). The fleet includes seven catamarans, two of which will start in Saint Lucia, and one will join in Panama. The oldest boat is Michael Chase's Peterson designed, Royal Huisman built cutter Whistle Wind V which will join the World ARC fleet in Hiva Oa, in the Marquesas Islands of French Polynesia. A varied fleet as ever but these differences will lose relevance over time as all crews get to know one another better and all live through this experience together.

Another Ocean for the World ARC 'family'
One year into their circumnavigation, World ARC 2014-15 fleet left the vibrant South African city of Cape Town to cross the South Atlantic bound for Brazil via the mid-Atlantic island of Saint Helena. This is the final ocean leg of their round the world adventure, after which the fleet will cruise the Brazilian coast, visit Granada and the Windward Islands and complete their circumnavigation back in Saint Lucia in April.

Around 70 crew members currently involved in the rally have spent the last 2 months exploring South Africa since they arrived in Richards Bay in early November. During their stopover in Cape Town, the fleet has been berthed at the V&A Waterfront and many utilising the haul-out facilities in at the nearby Royal Cape Yacht Club. Many spent the festive season on board with additional friends and family flying in to visit them to welcome the New Year, whilst others took the opportunity to fly home.

Michael Lomax sailing on Manta 40, Free and BrEasy returned to Cape Town before the re-start after visiting family, “Everyone asked 'what was crossing two oceans like?' It was difficult to put into words the experience of sailing a boat through the changing moods of the sea or the emotions kindled when arriving and leaving ports. It was easier to say that in 12 months, we visited 34 idyllic destinations in the South Pacific and Indian Oceans, any one of which could have been a 'dream holiday', with a little sailing thrown in! Coming back to the Marina in Cape Town was a true demonstration of the 'family' nature of the World ARC fleet. The short walk to the showers took hours as we ran through the gauntlet of boat crews all beaming big smiles and rushing over to shake hands and wish us Happy New Year.”

The varying conditions in Table Bay off of Cape Town proposed uncertain starting conditions for leg 15 of the circumnavigation, however at the 1045 time check the wind filled in from the north east between 10 and 15 knots.

Finding themselves in a wind hole stuck on the line, Polaris a Hanse 47 made a round turn joining the back of the fleet as the Amel Super Maramu 2000 Festina Lente took to the line first. Saphir closely followed then Folie a Deux taking third across the line representing the catamarans. As the fleet sailed off in the distance, Ron Keytel representing the Royal Cape Yacht Club said words of thanks over the VHF radio and wished the fleet fair winds to Saint Helena and Brazil. In response, kind words were reciprocated from various yachts in the fleet including Tim Hagon of Ghost, “Thank you Cape Town, your hospitality has been amazing”.