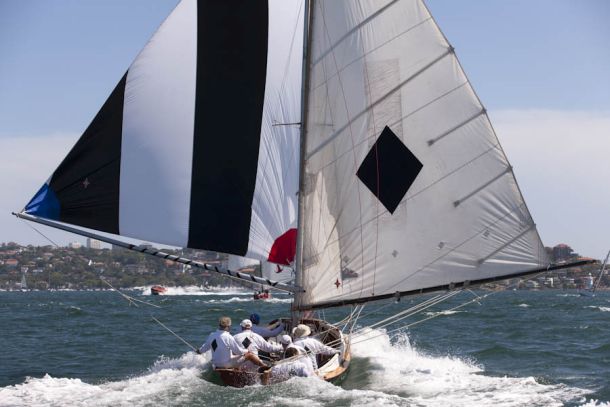 With his two main rivals Yendys (Harold Cudmore) and Australia IV (Terry McDell) retiring from yesterday’s race, it paved the way for Winning, who grew up on the Harbour he knows like the back of his hand.

However, Yendys looked to be the one controlling the race today. After a general recall, Irish yachtsman Harold Cudmore made a quick getaway off the start near Clark Island in a lovely north easterly, leading Aberdare and Scot (James Watt).

Up the work, Yendys led Aberdare a merry dance, the two leaving the rest to fight it out, although The Mistake, skippered by Jeremy Sharp was a clear third and never seriously challenged. It gave Sharp a series second overall after starting the day on equal points with Ian Smith’s Britannia which finished the series third on equal points with Yendys.

As the top three cleared out on the downwind leg to Clark Island, Top Weight, under spinnaker, came a cropper near Nielsen Park. Her eight-man crew battled the boat for control, but over she went and they found themselves swimming.

While the top three charged for the finish, the rest were swapping places. Australia (Pakhtun Shah) overtook Myra Too (Phil Barnett) running to Shark Island, but as they reached the YA mark, Australia was unable to gybe under kite and overstood. Myra Too, without spinnaker, had no such trouble and hoisted after gybing and regained her place.

On the run home, Winning overtook Cudmore and that was the end of what had been a solid lead for the Irishman.

Always sparing with words, Winning said of Aberdare’s victory, “It’s always nice to win. We let Yendys gybe inside us and we sailed through her. Aberdare’s a bit quicker downwind.

“We sail these things regularly. It’s not easy to come to Australia and sail something you’ve never sailed before, or just come once a year and sail them. They all did a good job to do as well as they did,” he said of Cudmore, Shah (from the USA) and the McDell brothers, Terry and Kim, from New Zealand.

“You’ve got to hand it to John, he was always going to win, he’s just too good,” a magnanimous Cudmore said. “We weren’t quite sharp enough. We should have hit our spinnaker quicker. We just weren’t aggressive enough.

“They’re wonderful boats – a lot of fun. I love to come here every January and chill out and sail these boats,” said Cudmore who gave up professional sailing 20 years ago, but still remains competitive via sailing superyachts and other boats.

Terry and Kim McDell agree. “It was a lot of fun, a new experience. It takes a while to learn to sail these boats. If I’d realised, Terry and I would have thought about coming out here sooner and come to grips with the boat,” Kim said.

“It’s an experience I would never miss. You need to know what you’re doing. You need time to tune and get a routine going. Like we should never have taken on all that water yesterday, so you learn how to avoid things like that,” he said.

Former two-time 18ft skiff champion Phil ‘Cub’ Barnett helmed Myra Too to fourth place today, his best result. It was a nostalgic event for him. “My dad (Don) passed away last year. His cousin Bill is getting on and I skippered the replica of his boat. I also raced with my son Daniel for the first time in a while,” he said.

“I sure would come back,” he said. “Bill said to me recently, ‘I’d just like to sail it to the Beashel Buoy once…’ and I wish he could too.”

“There’s a lot of mateship and good old fashioned values in the 18s. I’ve had a great time and I’d like to try it again soon. I didn’t come in with any high expectations. I’ve never sailed one before and I knew it would be hard. It’s harder than sailing a modern 18,” he conceded.

Eighteen year-old Daniel Barnett has enjoyed sailing the boat with his dad. “We sailed in Mirror dinghies a while back. This is very different, the old style boat. It’s good fun and interesting to sail on. It’s a whole lot different to sailing a 29er,” said Daniel, who coaches kids programs at Woollahra Sailing Club.

No matter the conditions, Winning, who will again contest the modern 18s J.J. Giltinan Championship in February, was the benchmark. His name and that of Aberdare will be carved for a second time on the Galloping Ghost trophy, coincidentally donated in 2002 by Robert Hart, brother of Fred Hart who owned the original Aberdare.

The entire fleet of 11 took part in the Sydney Flying Squadron hosted three-race Historical 18s Australian Championship. The SFS is home to this classic class which races on Saturday afternoons in summer. If you would like to give it a try, there are always positions available for willing hands.

For further information and contact details, go to: www.sydneyflyingsquadron.com.au/