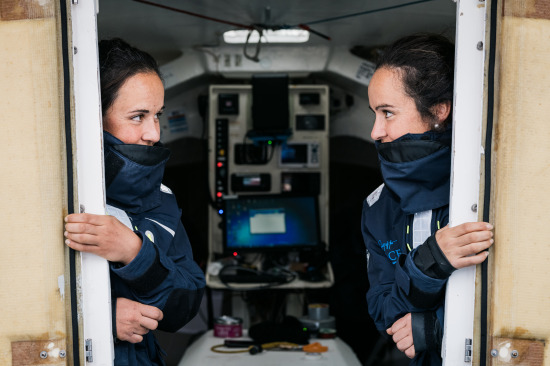 Julia and Jeanne Courtois will be competing in the race. Pic - Transat

Only three women have ever won the Transat Jacques Vabre.

Incredibly, for a race so embedded in the French sporting psyche, only one of those women is from France, the other two are British.

You have to go back 22 years for the only other time women have won the race. Britons Emma Richards and Miranda Merron completed the route to Colombia in 1999 aboard their 50 foot monohull Pindar.

Eleven of the 14 women sailing the Transat Jacques Vabre this year are French and include established names like Marie Tabarly and Alexia Barrier in the IMOCA class. Whilst in the Class 40, Marie Riou sails with Amélie Grassi as one of only three all-female crews in the race.

Briton Sam Davies sets off on her seventh Transat Jacques Vabre race partnered with Nicolas Lunven of France on her IMOCA Initiatives Coeur. She thinks the race format makes it a perfect springboard for upcoming female skippers.

“It’s a great race because it’s a double handed race and so there’s an opportunity for women who don’t have as much experience to get a Transat under their belts,” Davies said. “There are plenty of experienced skippers who are happy to do that.”

Two women experiencing the Transat Jacques Vabre for the first time are Julia and Jeanne Courtois. The 29-year-old twins from Brest in France are the winners of a contest aimed at helping new crews enter the race. Organised by Transat Jacques Vabre and sponsor Saint-James the pair won €40,000 plus mentoring and coaching assistance.

At the other end of the age scale, but also experiencing the race for the first time, is Canadian Melodie Schaffer. The 53-year-old took up offshore sailing three years ago when her children left home. She’ll be sailing in a Class 40 with fellow race rookie Ryan Barkey. The race gets underway from Le Havre on the northern French coast headed for Martinique on 7th November.

For the full story, see: https://www.transatjacquesvabre.org/en/news/news/2385/women-of-the-transat-jacques-vabre