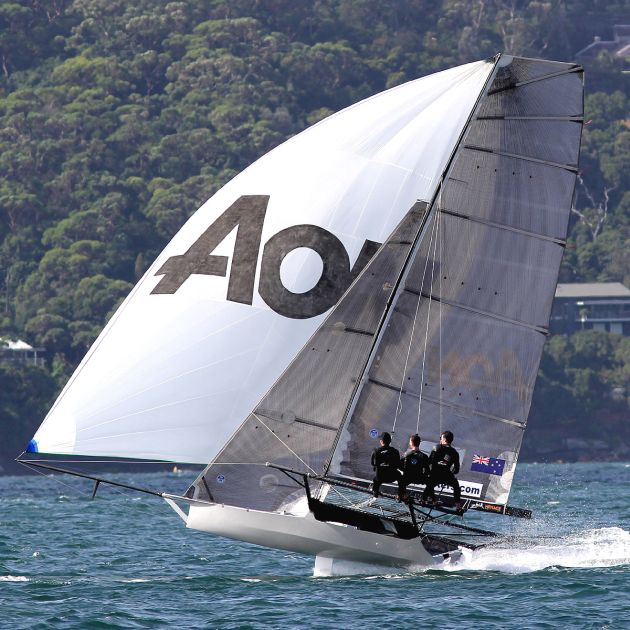 AON was in great form before a Manly Ferry affected their chances. Photo 18 Footers League.

The appliancesonline.co.au team of David Witt, Tom Clout and Tom Anderson dad to produce their very best form to take out Race 3 of the 2016 JJ Giltinan 18ft Skiff Championship on Sydney Harbour today. In a highly spectacular and entertaining race in 20+knots of southerly wind, the heavy weather specialists had to come from behind after the first three legs of the course before finally taking the victory by 43s.

Defending champion Gotta Love It 7 (Seve Jarvin, John Winning Jr., Nick Catley) also came from behind in the first half of the race to grab second place just 1sec. ahead of Compassmarkets.com (Keagan York, Matt Stenta, Angus Williams). After battling with the leading group for the entire course, New Zealand’s Yamaha (David McDiarmid) finished fourth, just ahead of Smeg (Lee Knapton) and another Kiwi skiff AON (Will Tiller).

The points are well spread at the moment and the contest is certain to be one of the most hard fought before the final race takes place on the harbour next Sunday. Appliancesonline.com.au presently leads with a total of seven points, followed by Gotta Love It 7 on nine points, Smeg 11, Thurlow Fisher Lawyers (Michael Coxon) on 12, Yamaha 15 and Coopers 62-Rag & Famish Hotel (Jack Macartney) on 20.

With a 20+knot southerly already blowing before the race, rig choice was made easy with all teams selecting the smaller #2 rig for the day. A few teams, including the Gotta Love It 7 team, even went further and put a reef into the mainsail.

New Zealand’s AON held the lead from Smeg after the first spinnaker run, followed by Yamaha, Thurlow Fisher Lawyers, Gotta Love It 7 and appliancesonline.com.au. After grabbing the early lead, the AON crew gave an excellent exhibition over the first three legs of the course to hold a 30s lead at the Rose Bay windward mark. Unfortunately for the visitors, the Sydney Harbour traffic worked against AON’s crew as they were forced to drop the spinnaker to avoid a passing Many Ferry.

Applianceonline’s crew were quick to take advantage of the situation and led the challenging group back to be just a few secs. behind at the bottom mark.

The leaders were having an intense battle over the next two legs of the course as Gotta Love It 7 and Yamaha applied the pressure to appliancesonline.com.au. Yamaha and ‘7’ elected to wait before setting spinnakers after rounding the Clarke Island buoy while appliancesonline went for the early set. It made little difference as appliancesonline continued to lead the way at Obelisk, although Thurlow Fisher Lawyers had moved up just ahead of Gotta Love It 7. Compassmarkets.com made a great charge down the run and was in fifth place ahead of AON.

The next work back to the mark in Rose Bay was critical to the outcome and the race for the lead changed at least three times with appliancesonline, Smeg and Gotta Love It 7 sharing the honours.

As spinnakers were set for the final spinnaker run back to the bottom mark, appliancesonline led ‘7’ by 5s with Compassmarkets.com, Yamaha and Smeg all in hot pursuit. Despite the challengers pressure the appliancesonline team were able to hold on for the win and only a few secs. many of the placings in the top half of the fleet.

Race 4 of the 2016 JJ Giltinan Championship will be sailed tomorrow, Wednesday (17 February). The club’s regular spectator fery will follow all races, leaving Double Bay Public Wharf, alongside the clubhouse. Anyone planning to follow the racing during the championship, on the spectator ferry, should make sure they don’t leave it too late to buy their ticket.

All races will start at 3pm with the exception of Race 6 (Saturday, 20 February) which will start at 4pm. Spectator Ferry will leave Double Bay Wharf 30mins prior to each schedules start time.

There is Livestream race coverage of every race on www.mysailing.com.au– Frank Quealey, Australian 18 Footers League