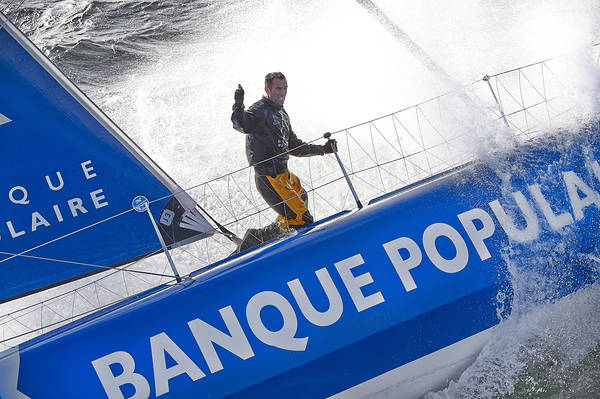 The IMOCA 60 battle in The Transat bakerly, now in its 11th day, has been dominated by the duel between Armel Le Cléac’h on the foiler Banque Populaire and Vincent Riou on the more conventional PRB.

For days now Le Cléac’h has managed to stay ahead of Riou but never quite shake him off. With 450 miles left to sail to the finish at New York, at a position around 200 miles south-southeast of the southern tip of Nova Scotia, Banque Populaire was this afternoon 63 miles ahead.

The two boats were sailing in a dying northwesterly and will then slow down during a light patch before the breeze picks up again from the south. For Le Cléac’h this race was as much about competing as it was confirming his new boat’s durability for the upcoming Vendée Globe solo round-the-world race.

The Frenchman today reported that he is happy with what he has found. “With two days of racing left, I’m confident now that the boat is reliable which is a big step forward,” he said. “I’m happy with how it has handled and how it works on foils. We came into this (race) to gain experience of big weather and that is what we have had, with some room for rest. It’s been a useful experience and has put me in good stead for the Vendée Globe.”

If two-time Vendée runner-up Le Cléac’h does hold on for the win ahead of Riou, it will reverse the finishing positions of the boats when raced two-handed in the Autumn in the Transat Jacques Vabre when Riou and Seb Col brought PRB home ahead of Le Cleac’h and Erwan Tabarly on Banque Populaire.

In the Class40 fleet the battle at the front has made for compelling armchair viewing as the boats skirt the southern edge of the Ice Exclusion Zone, 750 miles astern of Le Cléac’h and co. The leader Isabelle Joschke on Generali-Horizon Mixite, took an interesting hitch to the north, heading straight for the ice zone, before tacking back – a move that has given her a faster angle of attack as the westerly airflow builds in strength.

In her first race in a Class40 monohull, Joschke is bidding to become the first female winner of a professional transatlantic race since Dame Ellen MacArthur won The Transat in 2000. This afternoon she has a lead of 23 miles over Britain’s Phil Sharp on Imerys with Thibaut Vauchel-Camus on Solidaires En Peloton-Arsep in third place, another nine miles back.

Sharp is anticipating a rough passage to the finish, still some 1,180 miles away. “I’ve started the long upwind slog,” he reported. “It’s seriously uncomfortable. Built for speed, not comfort, the boat slams and shudders on every wave. Only another 1,000 miles upwind – I’ll be pushing hard to get it done.”

The Class40 race winner has always looked as if he or she will come from the group led at various times by Joschke, Sharp and Vauchel-Camus but they all know that, 200 miles to the south of them, the hugely experienced campaigner Louis Duc on the oldest boat in the fleet, Carac, could yet play a winning hand.

“I think we will see the (relative) benefits of the northern or southern routes in the approach to the finish line,” Duc summarised today. Duc has been enjoying his race, particularly the endless variation in conditions that he has had to deal with and he has been enjoying the wildlife too. “Over the last few days I’ve had dolphins accompanying me. I’ve also seen whales, spouting water – that was pretty cool,” he said.

The Multi50 battle between Gilles Lamiré on French Tech Rennes St Malo and Lalou Roucayrol on Arkema is still continuing, even if the two protagonists are 350 miles apart. But Lamiré retains his edge with a lead of 241 miles and with only 566 miles left to sail to the finish line at Sandy Hook.

The next boat to cross that line in the early hours of tomorrow morning UK time, will be the third and final Ultime trimaran, Actual, skippered by Yves Le Blevec. With 11 miles to go and travelling at 16.6 knots the job was almost done and Le Blevec could reflect with satisfaction on his first big solo outing on an Ultime.

“I’ve not experienced the hellish conditions that I expected on this transatlantic, but I’m really happy with my first solo Ultime experience,” he said. “It’s been a really special race following all the effort it took to get to the start. At no time have I felt in trouble or at risk of damaging the boat – it’s been very satisfying.”

The class rankings at 1600 BST – updated every four hours