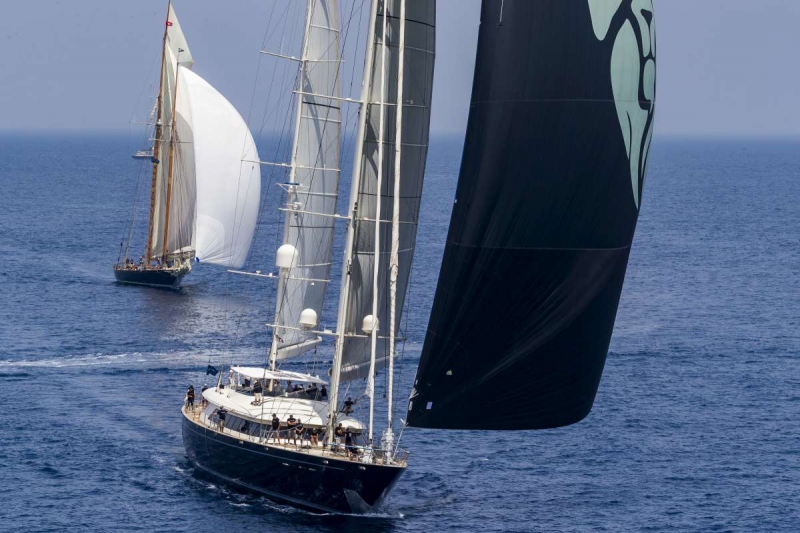 Porto Cervo, Italy: The 12th edition of the Loro Piana Superyacht Regatta, organised by the Yacht Club Costa Smeralda and hosting 20 boats ranging from 25 to 52 metres in length, concluded today with the classification unchanged from yesterday.

Today started with a wind of 8-10 knots from the north-east for the first Warning Signal at 12.40 pm, but the race was called off due to the wind dropping off after the Performance division rounded Monaci Island. Magic Carpet 3 and WallyCento were in the lead.

A few minutes away, the wind had also dropped drastically on the Cruising race course, leaving the Regatta Committee no choice but to send the fleets back to port.

The Silver Jubilee Cup, assigned to the top yacht over 30 metres with an interior cruising set up, also went to the WallyCento Magic Carpet 3, although on equal points with the Perini Navi Silencio. The deciding factor for the award of the trophy was that Magic Carpet 3 belonged to the division with the most competitors.

“This is the reason for the victory,” the German champion joked “because it is my birthday! Today we were leading the race when it was cancelled, so at least we had more time to celebrate…

“Really, we prepared the boat well over the winter, in the past few days the indications from the navigator Marcel Van Triest were perfect, the whole team is very close-knit and it was important to race in the Palmavela, that was the dress rehearsal for our orchestra.”

The Cruising division also produced a hat-trick for the 50-metre Perini Navi Silencio, with two prominent names in the world of sailing on board; Ludde Ingvall at the helm and Chris Dickson calling tactics.

“It was amazing!” declared Silencio's owner, Nikita Bourtakov, “I'd like to thank the Yacht Club Costa Smeralda and Loro Piana for creating this amazing platform where people with a shared passion can come and enjoy sailing.

“We had four days of amazing sailing. I'd like to thank the crew, which was really international, for getting us through the race and achieving this result. We are definitely going to be back next year.”

The Southern Wind Trophy goes to the SW82 Grande Orazio, owned by YCCS member Massimiliano Florio, for the second time. In second place, the SW105 Kiboko Tres, making its racing debut, improved constantly throughout the week, showing excellent promise for the future.

Ammonite finished in fourth place on equal points with the All Smoke in third. Commodore Riccardo Bonadeo and Pier Luigi Loro Piana awarded Marcus Blackmore, the Australian owner of Ammonite, the Willy Persico Prize, dedicated to the memory of the founder of the Southern Wind shipyard, and an YCCS member.

Blackmore had won the Millennium Cup in New Zealand and arrived in Porto Cervo after having sailed half way around the world, showing that he fully shares the same philosophy on life and sailing that Willy Persico held.

Massimiliano Florio, helmsman and owner of Grande Orazio commented: “Winning is always nice, and even more so in a beautiful event organised by the Yacht Club Costa Smeralda, where I am a member. Sardinia is an ideal place for sailing, with its courses between the islands and the continuous changes in the wind.

“I really liked the atmosphere over these five days, both ashore and on board, on the water. I think I steered the boat well, we dealt with a lot of unexpected problems but we got through them thanks to our tenacity and a touch of luck.

“I would like to dedicate this victory to the engineer Willy Persico, an almost father-like figure who believed in me and accompanied me on this journey with the Southern Wind, for me it is an honour to have brought Grande Orazio to victory.”

During the prize giving, the Commodore of the YCCS, Riccardo Bonadeo, said: “I would like to thank all the owners and crews who have returned in great numbers to Porto Cervo for the 12th edition of the Loro Piana Superyacht Regatta and everyone who made this event possible, both at sea and ashore, starting with the main partner, Loro Piana.

“Beside me sits a close friend and member of our club, Pier Luigi Loro Piana, who attended the event despite the accident with his beloved My Song. Together with him we have created a prize in memory of our dear friend, an YCCS member and above all the founder of the Southern Wind shipyard – Willy Persico.”

The date of the next edition of The Superyacht Regatta in Porto Cervo was announced at the prize giving: 23 – 27 June 2020. The Save the Date is online here.

With the Loro Piana Superyacht Regatta just finished, the Yacht Club Costa Smeralda calendar continues immediately with the Star World Championship. From 16 to 22 June approximately 70 crews will take part, including some legendary names in sailing.

Today, to mark World Oceans Day, the YCCS with its One Ocean Foundation organised the cleaning of Mannena beach (Cannigione, in the municipality of Arzachena) with the support of about 100 volunteers.