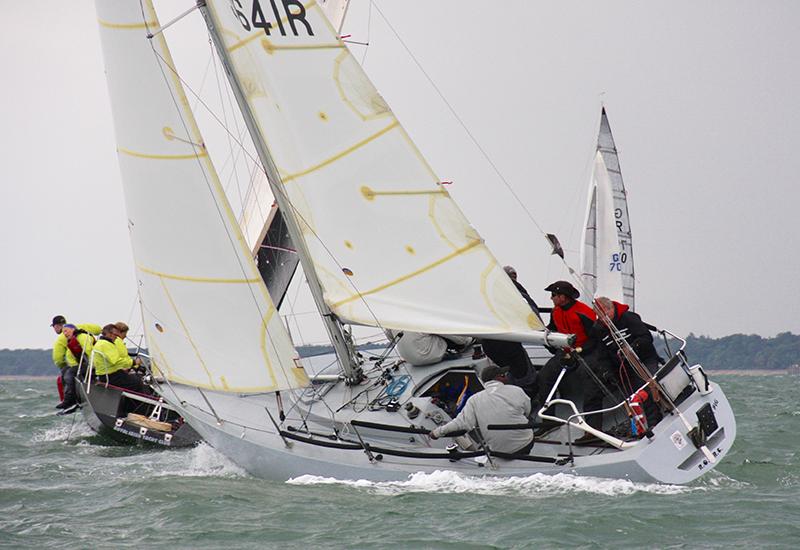 The competitors in the Coutts Quarter Ton Cup 2016 found themselves sitting right in the centre of a very slow moving low on their final day of racing off Cowes and were forced to watch as the wind went frustratingly round and round in circles. Race Officer Rob Lamb and his team from Royal Yacht Squadron Racing managed to get the fleet underway once, but sadly had to abandon on the first beat as the wind shifted from a 7 knot northerly to a 2 knot southerly.

The only members of the assembled company seriously disappointed by that decision were Ian Southworth's Whiskers crew, who had just reached the weather mark a country mile ahead of their nearest rival, and Diarmid de Burgh-Milne in Lacydon Protis who was in second when the abandonment came. The Race Committee persevered shuffling marks around the Solent constantly as breeze sprang up from different directions, but eventually ran out of time at the 14.30 cut off.

With no racing the winner of the Coutts Quarter Ton Cup 2016 was confirmed as Bullit, helmed by owner Louise Morton whose name will now be engraved on the trophy for the fourth time, a record equalled only by her husband Peter Morton. The podium for the Coutts Quarter Ton Cup 2016 is completed by second placed Blackfun, designed by Laurie Davidson for the 1980 Quarter Ton Cup in Auckland where she finished 8th, helmed this year by 2007 Etchells World Champion Oscar Strugstad who got a late call up to stand in for owner Tony Hayward; and Sam Laidlaw's Aquila, which was designed by Rolf Vrolick, in third. Despite their moral victory in today's aborted race eight Ian Southworth and the Whiskers crew had to be content with the leather medal in fourth place.

Louise was also fulsome in her praise for her all girl crew of Lucy Macgregor, Kate Macgregor, Colette Richmond, Bethan Carden and Annie Lush, most of whom have been sailing with her for some years. “They are a great gang and we have so much fun on the boat and ashore. Annie Lush joined us for the first time this week and has fitted into the crew superbly. Sailing such a great boat, with such a talented crew in a fleet as strong as this is an extraordinary privilege.”

Also winning the right to engrave his name on a Coutts Quarter Ton Cup Trophy for the fourth time is Pierre Paris, who once again wins the Corinthian Trophy for amateur crews. Pierre and his crew of Basil Geron, Nicolas Guillou, Rodolphe Veschamp and Marc Le Clerq sail over from France each year to race in the event and are great supporters of the Quarter Ton Class. Penguin Playboy was designed by Tony Castro and is lovingly maintained by Pierre himself. Pierre was typically modest when asked for the secret of their success, giving all the credit to the boat. His crew were determined to point out that Pierre is the reason for their success though, and equally keen to know if they would finally get to keep the trophy now they have won it four times!

In 2015 the Quarter Ton Class lost one of its most ardent supporters, Roger Swinney, who was a founding member of the revival class owning both the David Thomas designed Ayanami and the 1986 McIlraith designed Innuendo. Roger was a true Corinthian sailor and a great friend to everyone in the fleet. In his memory the new Roger Swinney Trophy was presented to the winner of the Low Rating Division. The inaugural winner of the new trophy was Eric Reynolds Magnum Evolution, helmed this year by Piers Hugh Smith and crewed by Rob Gullan, Victoria Alkhurst, her designer Julian Everitt and Eric Reynolds. Runner up in this division was Eric Williams' delightful and diminutive Waarschip designed Love In A Mist, which was built to the first iteration of the Quarter Ton Rule. In third place was George Webb's Flashheart, which was designed by Ed Dubois, another terrific supporter of the class who crossed life's final finish line earlier this year.

As always the camaraderie surrounding the regatta was outstanding and whilst the fleet honoured their champions they also paid tribute to their historic little ships and all the fun they have in them.

“It's been a fantastic regatta and we're thrilled that we weren't last this year” said Lucy Wood of the Jack De Ridder designed Rum Bleu who first came to the event as complete novices and have improved their performance every year. “We just love the event and can't wait to be back next year.”

Diarmid de Burgh-Milne of Lacydon Protis was equally effusive saying, “We were so disappointed not to get a race in today. We've only been together as a crew for three days and we've been on a vertical learning curve. It's a brilliant event and we just wanted it to go on for ever.”

The regatta closed with the traditional Coutts Quarter Ton Cup Gala Dinner and Prize Giving held at the Royal Yacht Squadron, at which Admiral of the Class and yachting journalist extraordinaire Bob Fisher and double Olympic Gold Medallist and broadcaster Shirley Robertson were guests of honour. As always there were some very special prizes awarded alongside the major trophies.

The Oldest Crew was won by Phil Cook's David Thomas designed Purple Haze which was sailing just four up but had an average crew age of 58. Purple Haze qualifies for both the Corinthian and the Low Rating Divisions where she finished sixth and fifth respectively – not bad for a bunch of old boys!

Initially it looked like there was going to be a dead heat for the Youngest Crew, with Sam Laidlaw's Aquila and Louise Morton's Bullit both declaring an average crew age of 34, but a last minute declaration from Willie McNeill's Illegal crew beat them to it with an average age of just 32.

The Quarter Ton Walking Stick is presented each year to the oldest bowman in the fleet and this year goes to 55-year-old Johan Stolpe, bowman on Rickard Melander's Alice II.

The Marineware Trophy for the Concours d'Elegance is one of the most coveted trophies of the event and this year was won by Sam Laidlaw's Aquila which is one of the prettiest boats in the fleet and is a most deserving winner of this special trophy.

Finally, the Kemp Plate, which is presented in memory of Stephen Kemp who brought Coutts to the Quarter Ton Cup as our title sponsor and is awarded to the boat which in the opinion of the Coutts team most truly represents that certain undefinable something that is the Coutts Quarter Ton Cup, went to Ian Southworth and Led Pritchard of Whiskers who truly represent what the Quarter Tonners are all about as they laugh their way around the course.

Coutts celebrated their tenth year of sponsorship of the event this year and once again they have been the most supportive of sponsors. Each day they and their guests have been out on the water aboard the classic motor yacht Rum Jungle watching the racing and cheering on the sailors. They truly are a most remarkable partner and the entire fleet gratefully acknowledged their contribution in making the Coutts Quarter Ton Cup the huge success it is.