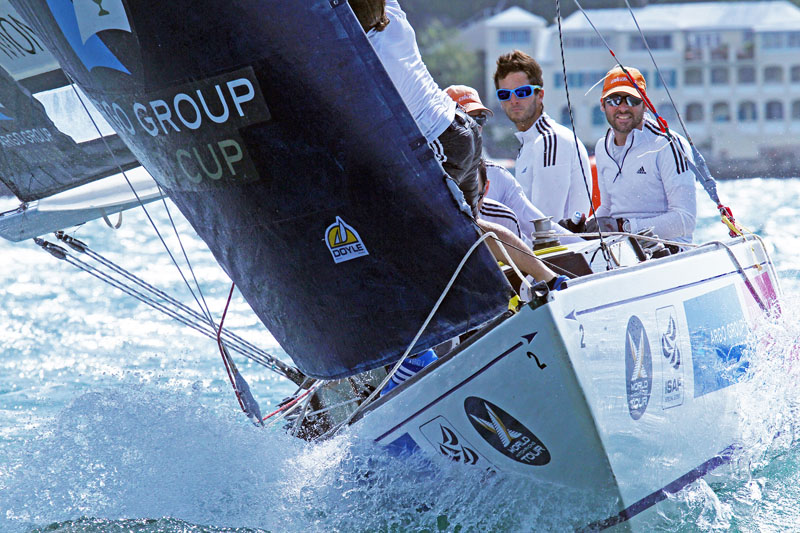 HAMILTON, Bermuda – The 67th annual Argo Group Gold Cup commenced today with wind conditions that kept crews on their toes and will keep the repair crews up late tonight.

The early leaders in the $100,000 match racing regatta, an event of the World Match Racing Tour, are Eric Monnin's Swiss Match Race Team and Taylor Canfield's USone. Monnin won three of his four races to top Group A with 3 points and Canfield leads Group B with 4 points. Each group is slated to sail seven races in the rounds robin.

The conditions were a handful, even for the experienced crews. The crews in Group A this morning saw wind gusts up to 28 knots during the second and third flights, making boat handling as difficult as it gets. The International One-Design (IOD) sloop is narrow at the waterline and when the spinnaker starts oscillating from side to side in a gust, it takes the boat with it.

Experienced skippers such as Dean Barker (SoftBank Team Japan) and Blythe Walker (Team RenRe) wiped out in spectacular fashion and the boats took a beating. The official breakdown list included four torn spinnakers, one broken gooseneck (the boom-to-mast attachment point), one broken mast crane (where the backstay attaches to the mast, affecting mainsail trim and headstay tension), one lost anchor chalk and a few collisions, including one with a concrete pier.

“I'm very happy with how we went around the racecourse,” said Monnin, last year's runner-up. His crew won against Barker when the breeze was the strongest and Barker's crew had to douse the spinnaker because they were out of control.

“We're not known as a heavy air crew, but we have a lot of experience racing here and today it paid off. It was important to have a good start because in the big breeze it's very hard to slow down if you're too early to the start line,” Monnin said. 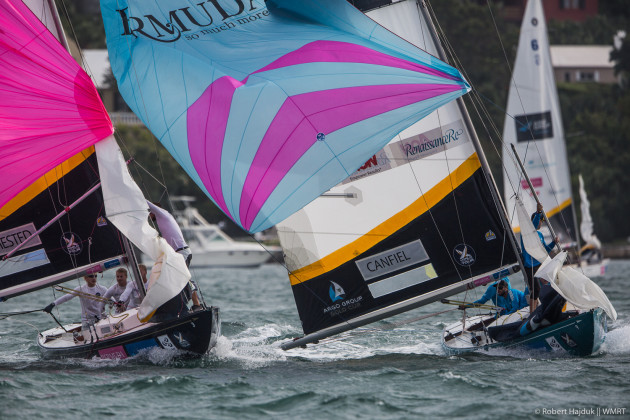 One member of Monnin's crew is Frenchman Mathieu Richard, the 2007 champion who has a fine touch in the IOD. Richard hasn't done a lot of match racing this year, but Monnin convinced his friend to crew for him and it could make the Swiss Match Race Team a dark horse contender.

“It's nice having him in the crew,” said Monnin. “He has good suggestions and I can rely on him when I'm not confident about a decision. I'm very happy to have him in the crew.”

The wind abated to 16 to 20 knots by the time Group B took to the water in the afternoon, but Canfield came out firing. He's the only skipper in the fleet to finish in the top three in each of the past three Argo Group Gold Cups, including winning in 2012, and today he used a combination of boathandling and penalties to complete the day with a perfect score.

“Today wasn't a plain sailing day, it was tough on all the teams,” said Canfield. “Match racing is such a different game in the IODs. It takes a while to acclimate to them and we were lucky to get four wins.”

Canfield won two races by getting penalties on his opponents. Against Denmark's Nicolai Sehested in Flight 3, Canfield trailed around the racecourse but got a windward-leeward penalty on his rival just before reaching the two-boatlength circle to the pin end of the finish line. Had Sehested gotten to the circle before the penalty, he would've been entitled to room to finish and might've won the match.

Canfield's next race, against Björn Hansen's Nautiska Racing from Sweden, went in his favor when Hansen earned a second penalty at the leeward mark.

“Our boathandling was great and my crew did a good job today,” Canfield said. “We were four or five boatlengths behind Sehested but fought back. I think our spinnaker missed his backstay by 1 or 2 inches. Those are the races you have to have.”

Racing is scheduled to resume tomorrow morning at 9 am (ADT). Group B will head out to complete its three flights, followed by Group A at approximately 12 pm. The wind is forecast to be lighter, but the action should be just as furious.