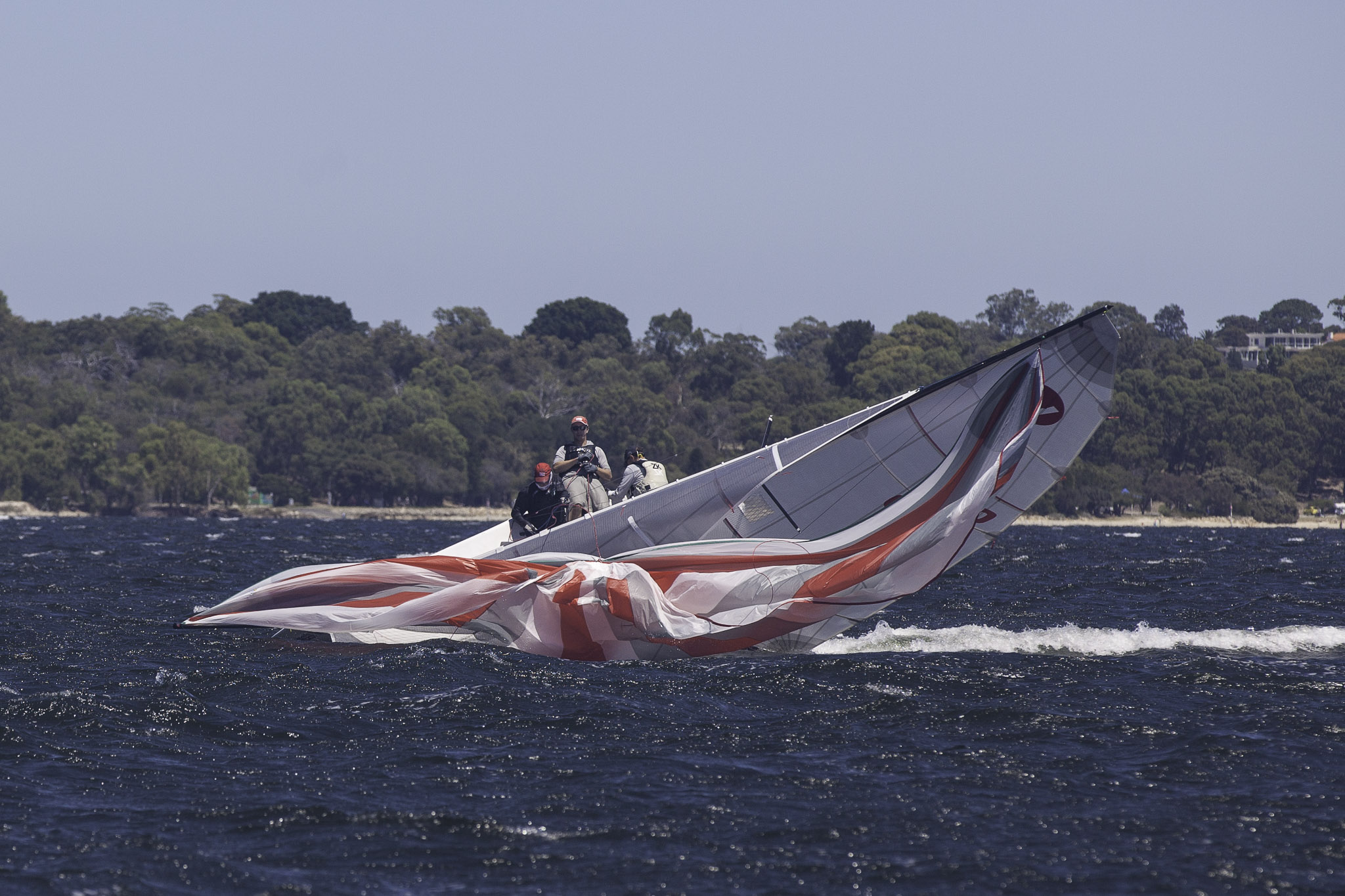 As forecast, the weather turned brutal. The first race, started in a southerly of about 12 knots, was abandoned before the leaders reached the half way mark of the first leg after a thirty degree windshift made it possible to sail to the windward buoy without tacking. A second attempt was made after the course and start line were adjusted, but resulted in a general recall with most of the fleet on the course before the start signal. The third attempt was still aggressive, but the fleet was under way with two skippers, Chris O’Keefe and John Park, disqualified under the “U” flag. O’Keefe had a horror day, falling foul again in race 3 and retiring from race 4.

Aggressive starts characterised the day. Race 2 began with no problems but in race 3 there were no less than five “U” flag disqualifications, including many of the pre-regatta favourites, Keith Swinton, Justin Scott, Nick Jerwood and Denis Jones. The experience will no doubt put them under pressure from here on since none can afford a second disqualification in the series.

Justin Scott was a dominant force in the light breezes of the Practice Regatta but found the going a lot tougher in today’s conditions, with a best placing of fifth, leaving him languishing in tenth spot at this stage, but the talented American, with Australian crew Conor Nicholas and Luke Elliot will be keen to improve on that. He finished second in the last Viper Worlds.

“We’re just happy to be here,” Scott said today. “But really I’m aiming for a spot in the top five. We’ve heard about the big breezes they’re expecting today and it’s a whole different game than the practice races, that’s for sure.”

Nick Jerwood finished the day with three wins and a disqualification, in which he crossed the finish in second place. With crew including his son, match racing supremo Matt and the boat’s owner Brian de Vries, they had few problems with the big breezes, displaying perfect control and plenty of speed. While they sit in third place overall at the moment, that will obviously change when drops come into play.

Albany sailor Murray Howson is no stranger to fresh conditions. Most of his sailing is in similar conditions so it was no surprise to see him sailing consistently enough to claim second spot on the leader board.

As Justin Scott observed, it certainly was a different ball game today, with capsizes galore, some breathtaking spinnaker rides and unfortunately a dismasting and some gear damage. The attrition rate reduced the final race today to just sixteen starters so the repair crews will be working overtime tonight to have boats ready for the next start at 11am tomorrow.