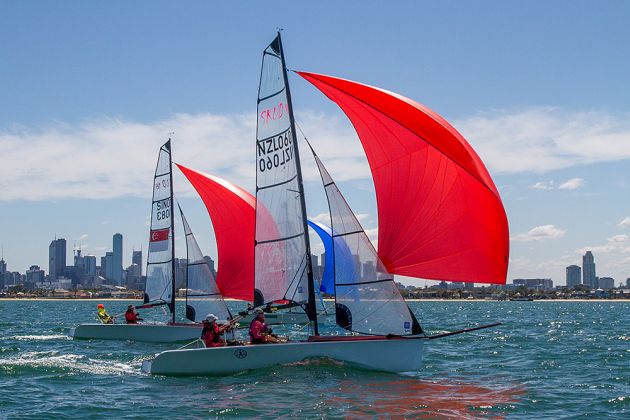 Vigilance and strict observance was required on the fourth day of racing at the Para World Sailing Championships being held out of the Royal Yacht Club of Victoria in Williamstown, Melbourne, Australia.

With severe conditions forecast for the late afternoon, the race committee brought the starting time forward to 11:00 in an effort to beat the weather. Sailors from 31 nations racing in the three classes selected for the Rio 2016 Paralympic Games were expecting a tough day and that is what they received.

Racing on all three courses began in wind strengths of eight to ten knots from the west.  All crews noticed wild swings in wind direction.  It was a day when crews had to be more observant than usual and ensure that they stayed in sync with the wind direction.  Those who failed to do so paid a terrible price.

The SKUD18's of the USA and Israeli teams were racing against the clock to replace their broken masts in time for the morning start, while Britain's Helena Lucas had an anxious wait while a boat builder worked frantically through the night to repair a gaping hole in her boat's transom. In the end the resources of the Royal Yacht Club of Victoria based support personnel successfully managed to have all boats back in action in time for today's first race.

The SKUD18 started race 7 in 8 knots of breeze from the west, with 75% of the fleet electing to hold starboard tack off the start line and favour the left of the course. The British team of Alexandra Rickham and Niki Birrell set the early pace and rounded the top mark clear of the Italian and French crews. The Australians at this stage were some distance back in fourth place.

On the downwind leg, the Italian and British crews, working the southern side of the course, struggled to gain the upper hand while the Australians gybed away inside them. The gap between boats narrowed considerably on the next upwind leg, with the British boat maintaining control of the race. At the final rounding of the windward mark, the Australians rounded behind the British but ahead of the Italians, with a long gap back to the rest of the fleet.  For a moment it seemed that the Australian boat had a chance for an unlikely win as it surfed towards the finish line in a good line of pressure on the northern side of the course while the British boat continued its steady progress on the southern side, trailed by the Italians.

When they gybed back towards the finish line, it became clear that Rickham and Birrell had actually extended their lead while Gualandris and Zanetti emerged ahead of Fitzgibbon and Tesch. It was a graphic illustration of the different wind direction on various parts of the course.

In race eight the Australians reversed the result on the British with the Italians third.

Total points scores with just three races remaining have Fitzgibbon and Tesch leading on nine points, followed by Rickham and Birrell on 20 and Gualandris and Zanetti on 26.

American Dee Smith had a field day in the 2.4mR fleet today, emerging with first and third placings. Although Frenchman Damien Seguin failed to make the top six in race 7, he won race eight to remain in contention, with countryman Kevin Cantin second. The fleet was spread over the whole of the last leg in the last race, an indication of the difficulty many competitors had in reading the breeze.

Seguin leads on 16 points, Germany's Heiko Kroeger has 21 with Australia's Matt Bugg on 33.

The Sonar race committee set their course for race 8 in a breeze close to 15 knots, but that dropped to about half that strength at the start signal.  Although the Australian boat started well in the centre of the line, they were caught in disturbed air and pinned down to prevent them from tacking away.

It was a case of “beware the wounded Frenchman”, after the crew of Eric Jourdren, Eric Flageul and Nicolas Vimont-Vicary were disqualified from race seven.  Penalised by the on-course jury for pumping on the downwind leg, they responded with a one turn penalty instead of two and suffered the consequences.  A determined crew started strongly on race eight and were never seriously challenged to take a decisive win.

The Australians had a miserable day.  Having committed to the left hand side of the course, they watched in frustration as all the favourable wind shifts occurred on the right. They could not recover and had their worst result for the regatta with an 11th place. Things went slightly better in race eight, where they finished fifth.

“It was a really difficult day out there today,” said Australian coach Grant Alderson. “The good thing is that we still hold a comfortable lead with three races remaining and are on track.”

That may have been an understatement.  As the last boat passed through the gate to complete the first of two laps, the leaders were less than 200 metres from the top mark ready to commence the last leg of the race. There was a similar spread in the 2.4mR fleet.

Final standings for the Sonars show Harrison, Boaden and Harris leading with 14 points, ahead of Britain's Robertson Strodel and Thomas with 28 and Jourdren, Flageul and Vimont-Vicary on 31 after today's disqualification.

The penultimate day of competition will kick off at 13:00 on Wednesday 2 December.