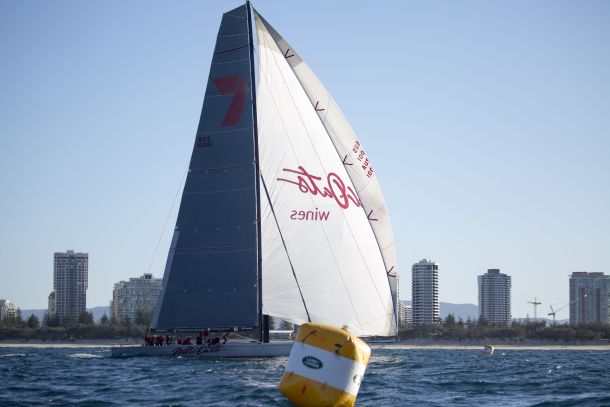 The 30-metre long, silver-hulled racer, which is owned by the Oatley family, made a dramatic exit from the Rolex Sydney Hobart race last December when the hydraulic mechanism controlling the canting keel failed. Wild Oats XI was leading the fleet mid-Bass Strait when the incident occurred.

The cause for the keel failure was confirmed after the yacht limped back into Sydney Harbour and was lifted from the water.

“We did exhaustive tests on every piece of the hydraulic keel mechanism to make sure this was a once only problem,” said the yacht’s skipper, Mark Richards. “The keel failed because part of the mechanism got out of alignment.”

Richards said he and the Wild Oats XI crew were looking forward to being back on the race course on what will be the first stage of an extensive program leading up to this year’s Rolex Sydney Hobart race. The Brisbane to Keppel race is next on the agenda, then Audi Hamilton Island Race Week starting August 19.

A radical new jet-black mainsail and jib will be tested on the yacht during the Sydney Gold Coast race. Made by North Sails using the 3Di RAW process, the massive mainsail is 12 per cent lighter than Wild Oats XI’s previous mainsail. The space-age fabric is also smoother so the drag factor is minimised.

The Wild Oats XI crew is hoping that their yacht’s original sistership, first named Alfa Romeo and now Black Jack 100, will be on the start line on Sydney Harbour at 1pm tomorrow. Brisbane yachtsman, Peter Harburg, purchased the yacht in Europe earlier this year, shipped it to Sydney and had extensive modifications made, including the fitting of a considerably longer bowsprit. The yacht’s sailing master, Mark “Squark” Bradford, said this morning he was 99 per cent certain Black Jack 100 would be ready to race to the Gold Coast.

Race organisers at the Cruising Yacht Club of Australia in Sydney have confirmed 57 yachts have entered for the 32nd staging of the event.

The current weather outlook from yachting meteorologist, Roger “Clouds” Badham, indicates that Wild Oats XI’s course record time of 22 hours 03mins 46secs will not be bettered this year. Badham expects the majority of the fleet to experience light to moderate headwinds winds from the west to north quadrant of the compass, with the maximum strength being about 25 knots on the first night at sea.