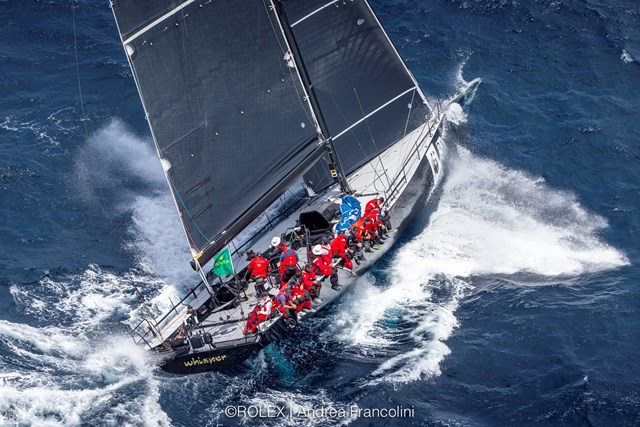 Overall victory in the 2021 Rolex Sydney Hobart Yacht Race is hotting up and “up for grabs”, according to Michael Bellingham, navigator of one of the main contenders, Whisper.

Bellingham says the fate of those crews in the Cruising Yacht Club of Australia’s 628 nautical mile race will depend on who can best master the upcoming tricky conditions.

As tension builds in the race for the Tattersall Cup, awarded to the overall winner, the race for Line Honours still has Peter Harburg’s Black Jack in front.

At 9am (AEDT), Black Jack was leading a fleet that was down to 52 boats, including 10 two-handed entries after one of them, Rogue Wave, withdrew due to boat damage earlier this morning.

Behind the three 100-footers, the Grant Wharington-skippered 80-footer, Stefan Racing, was in fourth place and approximately 55 nautical miles behind SHK Scallywag 100.

Speaking this morning, Bellingham said the David Griffith-owned JV62 Whisper had “crossed Bass Strait and is at the Flinders Island end of the group of islands right now.”

They were sailing in “softer breezes” that he said was a “5 to 10 knot south-easterly”.

Bellingham said conditions were “very tricky” and should become more so during the day.

Asked what he is expecting in terms of weather today, Bellingham said: “Very tricky wind conditions … a difficult wind transition at the top of Tasmania.

“How to get through that and where to put your boat is the question. And there will be another very difficult transition about halfway down Tasmania as well.

“It’s all up for grabs with this race. I couldn’t tell you who is going to win this one. The 100-footers might get through the second transition and win; or boats like Love & War could also do very well.”

“We can see the 80-footer Stefan Racing off our bow,” Bellingham said.

“Everyone on board Whisper is fine and happy. We are very pleased with the progress.

“We’re looking at getting towards the Flinders group of Tasmania later today,” Bellingham ended from fifth place in the line honours standings.

Meanwhile, Black Jack navigator, Alex Nolan, speaking while sailing at 10 knots while the crew was engaged in a sail change, said they were working to extend their lead as much as possible.

At 9am, Black Jack and LawConnect were halfway down the Tasmanian coast, sailing just outside the rhumbline. SHK Scallywag 100 was nearer the top of Tasmania and inside the rhumbline some 30nm miles behind the leaders.

Nolan said conditions had been “pretty light in the early hours of the morning. We are looking forward to a good day, and to where we will end up this afternoon and evening.