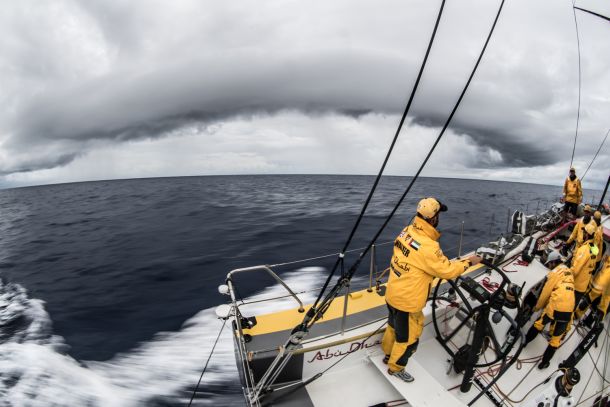 AUCKLAND, New Zealand, February 26 – Birthday boys Charles Caudrelier and Ian Walker were planning to dampen each other’s celebrations as Leg 4 of the Volvo Ocean Race continued to go down to the wire on Friday.

Abu Dhabi Ocean Racing (Walker/GBR) held a tiny 7.3-nautical mile (nm) advantage at the head of the fleet at 0040 UTC with Dongfeng Race Team (Caudrelier/FRA) and MAPFRE (Xabi Fernández/ESP) leading the chasing pack. The leading trio have around 300nm still to sail to complete the 5,264nm leg from Sanya to Auckland and are expected to arrive in the port known as the 'City of Sails' on New Zealand’s North Island around 2100-2400 local time on Saturday/Sunday (0900-1200 UTC).

Walker celebrated his 45th birthday on Thursday and Caudrelier his 41st a day later, but neither was in the mood to celebrate anything just yet although the Frenchman had a double reason to mark the day – Dongfeng Race Team’s Volvo Ocean Race campaign was launched exactly a year ago as well. Instead, they were desperately trying to eke out some kind of advantage before the nail-biting final day. It's a leg which has seen the fleet sail through the South China Sea from February 11 and battle all the way through the Pacific Ocean, exchanging the lead on several occasions.

According to Caudrelier, arch-rival Walker has so far received the better of the gifts from the weather gods in the last 24 hours.

“This morning I woke up a 41-year-old onboard this boat, leading Leg 4 of the Volvo Ocean Race” he wrote in his daily blog from the boat. “I’m spoiled. “Yesterday, it was Ian Walker’s birthday; we exchanged some nice, fun emails about our receptive gifts. Tonight we’ve been the victims of a cruel squall, which destroyed in 30 minutes the three days of effort we’ve made to catch up and overtake Ian and his men.

“Without wind for 30 minutes, we went backwards against the swell while Azzam sped up to 18 knots, three miles from us. That was his gift. I’m waiting for mine before the end of the leg.”

The pair look destined to be the closest of rivals throughout the nine-month, 38,739nm race, which will be decided over nine legs in all before the conclusion in Gothenburg, Sweden on June 27. They are currently one point apart after three stages with Leg 3 winners Dongfeng Race Team narrowly holding the upper hand. It is by no means, however, a two-horse race – or leg.

MAPFRE (Xabi Fernández/ESP) could well be cast in the role of party spoilers on Saturday night. They lay just 0.7nm behind Dongfeng Race Team and were quite capable of catching one, if not both, of the leading boats and claiming their first leg win of the race.

Team Alvimedica (Charlie Enright/USA), Team Brunel (Bouwe Bekking/NED) and Team SCA (Sam Davies/GBR) looked likely to be contesting the minor placings although a late, windless ‘park-up’ near the finish could yet lead to a surprise.

Auckland is no stranger to thrilling finishes – there are still strong memories here of the 1989-90 race’s showdown between Peter Blake’s Steinlager 2 and Grant Dalton’s Fisher and Paykel, which the former won in the last couple of nautical miles.

New Zealand Prime Minister, John Keys, was among the many who are looking forward to the conclusion of such a memorable leg. He opened the Race Village on Friday after the local Maori people, the Ngāti Whātua Ōrākei, officially ‘loaned’ the Auckland Viaduct Basin area to Race CEO, Knut Frostad.

“Lots of families and friends will come, lots of tourists will come. To have come all the way from China on such a long leg and to have such a small gap separating the teams shows you how well matched they are. And that makes it really exciting,” said Keys.