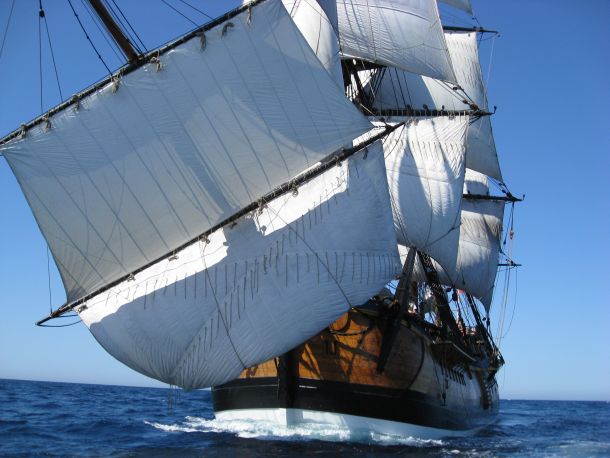 The Australian National Maritime Museum is calling on adventure seekers and history lovers to sign up and join the crew of its replica of James Cook’s 18th-century vessel HMB Endeavour as it embarks on a new sailing program in 2015 and 2016.

The 2015/16 voyage program is available now and features a voyage to Brisbane this October and a longer voyage to Victoria and South Australia in early 2016, allowing people in regional Australia to connect with this important vessel.

For its first voyage Endeavour will depart Sydney on 6 October and will sail for ten days in the footsteps of Cook up the east coast to Brisbane. The Endeavour crew will be joined by Captain Cook expert Malcolm Nicholson, co-ordinator of the Captain Cook Society (Australia), who will share his knowledge of significant places along the way.

Endeavour will arrive in Brisbane on 16 October at Portside Wharf in Hamilton where it will be open 17 – 21 October for visitors and school children to climb on board and find out what life was like in Cook’s day. It will depart for Sydney on 22 October on a whale-themed voyage, conducting a whale count with a trained whale observer on board, and arrive back at the museum on 2 November 2015. Berths for the ten-day Brisbane voyages start at $2,950.

In 2016 Endeavour will embark upon a three month voyage program during which it will sail to regional South Australia and Victoria, visiting Geelong, Adelaide, Port Lincoln and Portland. Opportunities exist to help sail the ship on one of the legs, which range from five to 12 days.

At each port Endeavour will be open to for locals to step on board this national treasure.

The 44-metre ship is sailed by a professional crew of 16 assisted by 40 paying voyage-crew who learn first-hand what it was like to sail the oceans during the great era of European exploration. Voyage crew sleep in hammocks, learn how to set sails, steer the ship and stand watches. Full training is provided.

But if you prefer a more leisurely sailing experience, sign up as one of four ‘supernumeraries’ on each voyage. As a supernumerary you can choose your level of involvement while enjoying the privacy of your own cabin, one of the gentlemen’s cabins on the original Endeavour inhabited by Joseph Banks and his team of artists and scientists.

Bookings are now open to join the crew and set sail on this unique sailing experience. To book, visit www.endeavourvoyages.com.au