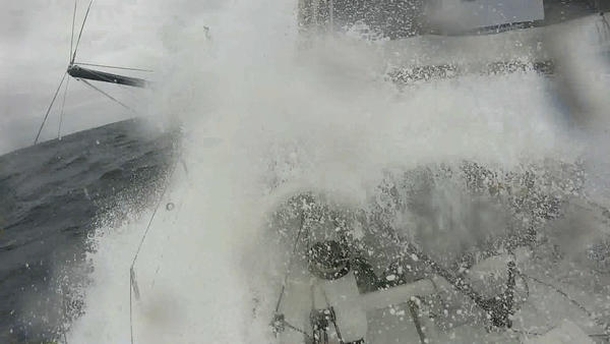 Together with Bernard Stamm and Jean Le Cam on Cheminées Poujoulat, Altadill and Jose Munoz were today battling the most testing conditions the Barcelona World Race fleet has yet faced, with 40-45 knots of wind and severe sea states of 6-8m waves generated by a south-moving low pressure system made up of two merged tropical cyclones.

The duo on Cheminées Poujoulat, around 150 miles further east, have switched into defensive mode, last night sailing with three reefs in the main and dropping their headsail in order to slow the IMOCA 60 down in the face of the storm, hoping the depression will pass rapidly to the south of them. This has also allowed second-placed Neutrogena to gain nearly 60 miles on the leaders.

“It's the first time I have had to stop a boat racing, but it was the only solution to avoid getting into a survival situation,” explains Stamm.

“Yesterday we were under staysail with three reefs in the mainsail. For a few hours, we were sailing with no foresail. So we do not have a lot of speed and we are a little exposed to the waves but it’s fine. We can take this opportunity to do a little maintenance, preparing the boat, and eating and sleeping because when we set off again, we will still be in the depression and it may even have strengthened for a while.”

The Barcelona World Race management team are also keeping a close eye on the conditions, monitoring the boats half-hourly overnight, and staying in contact with the teams’ shore crews.

“In order to be proactive, we also contact the MRCC [Maritime Rescue Coordination Centres] of the region concerned by the storm,” explains assistant race director Hubert Lemonier, “So we already have a contact with those guys and we make sure that in case of a crisis, we can activate and organise a response i n the region if one of the boats needs help or needs any search and rescue operations.”

The race for third

The other duel in the fleet, between GAES Centros Auditivos and Renault Captur for third place, has taken another turn, as Anna Corbella and Gerard Marin pull away from their pursuers as they exit the high pressure system. GAES Centros Auditivos has made 80 miles on the leaders, and widened their advantage over Renault Captur to over 270 miles, from just 160 yesterday afternoon. They were the fastest boat over the past 24 hour period, clocking over 16 knots at Tuesday afternoon’s 1400hrs position update.

However Jörg Riechers on Renault Captur was in a positive frame of mind, reporting all was very well on board – he and Sebastien Audigane were enjoying sunshine, warm temperatures, and a slight surfeit of food — and feeling confident in their ability to make miles in the st ronger conditions.

“At the moment we are losing a little bit of distance on [GAES]. But that was predictable because they have moved out of the high pressure system before us, so they had more wind there last night. I think now we have the same wind, so probably the distance to them will stay stable and we hope that with these stronger conditions which are coming up, we can make up some ground. So I think now we are 260 miles behind, not the 400 we once were, so I think there will be a real fight for third place now,” said Riechers this morning.

“I think from my point of view the boat is really nice reaching when there’s some wind. Less fast dead downwind in medium, like last night, I think there we were suffering a little bit. But in the conditions which are coming up, strong winds, downwind, I think the boat is quite, really good.”

All in the Indian

Fifth-placed We Are Water have reduced their deficit to the leaders to under 2,000 miles this afternoon, while One Planet One Ocean Pharmaton has been slowed by a ridge of high pressure, limiting their 24-hour distance covered to just 157 miles.

Meanwhile Spirit of Hungary has joined their fellow competitors in the Indian Ocean, crossing 20°E at 0500am (UTC).