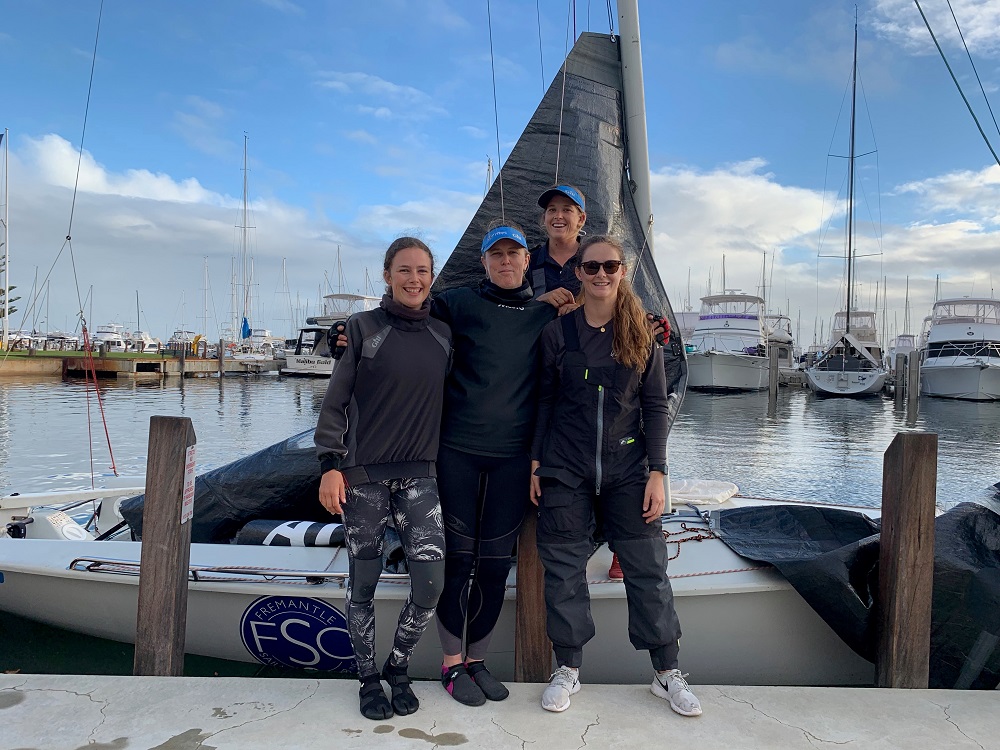 West Australia has joined the multi-state line-up for the National Sailing League Final, fielding a women’s team of high-level sailors formed especially for the event’s debut in Sydney next week, April 25 -28, 2019.

A week out from the start of competition on Friday April 26, NSL director Mark Turnbull anticipates between 16 and 20 teams will compete for the chance to take Australia and New Zealand’s two club spots at the Sailing Champions League final in St Moritz this coming August.

The WA team will sail for Royal Freshwater Bay Sailing Club, jib trimmer Hayley Clark commenting: “We are all really excited to have an opportunity to race with each other, as competitive sailors in a competitive fleet. We all know each other either through coaching, working together or being training partners in the Australian Sailing Squad.”

Skipper Shelley White, 25, grew up at Yeppoon and fell in love with sailing at six, going on to achieve a career highlight of 2008 Optimist National Champion. White is the current Australian Optimist girls squad coach and works at RFBYC in Perth as their training centre principal.

Main trimmer Ella Clark, 23, began in Flying Ants at the age of 12 and moved into the 420 and 470 classes. After winning the 420 Youth Worlds in 2013 she moved into 49er FX class and is now living back in Perth pursuing a campaign in Foiling Kitesurfing for Paris 2024.

Finally, 20-year-old jib trimmer Hayley Clark went from a mixed dinghy and skiff background to the heights of 29er Female World Champion in Medemblik, 2016. She campaigned for Tokyo in the 49er FX until her partner retired, and then in the foiling Nacra 17 with Conor Nicholas for a time. More recently she’s contested keelboat series including the Etchells states, women’s keelboat states and Interclub Championships, and coached 29ers.

“It’s great to sail with girls that are like-minded, competitive, love to go fast, and enjoy the sport of sailing,” Clark said. “The National Sailing League is an excellent opportunity to sail together and represent our yacht club, which has been really supportive with both this event and our previous individual campaigns.”

One of the NSL’s key drivers is mixed gender participation, the reason all open teams must include at least one female, and Turnbull says Clark’s team is exactly the skill level the NSL aims to attract.

The final list of participating clubs and teams will be announced prior to the three-day Australian and New Zealand launch of the Sailing Champions League international club competition that is wildly successful across Europe.

Royal Sydney Yacht Squadron at Kirribilli, home of the inaugural NSL Final, will host a welcome function for crews on Thursday April 25. Racing is due to commence on Sydney Harbour Friday and Saturday morning from 10am and 9am on the Sunday. The cut-off for the last warning signal is 5pm Friday and Saturday and 4pm on Sunday April 28.

Boat owners who will be in Sydney next week, the second half of the New South Wales school holidays, are being encouraged to take their vessels out to spectate fast-paced umpired fleet racing at its best with teams rotating Elliott 7s on the water and short races, just 12-15 minutes per race.

Notice of Race for the April Final: https://nationalsailingleague.com.au/2019-inaugural-championship-notice-of-race/