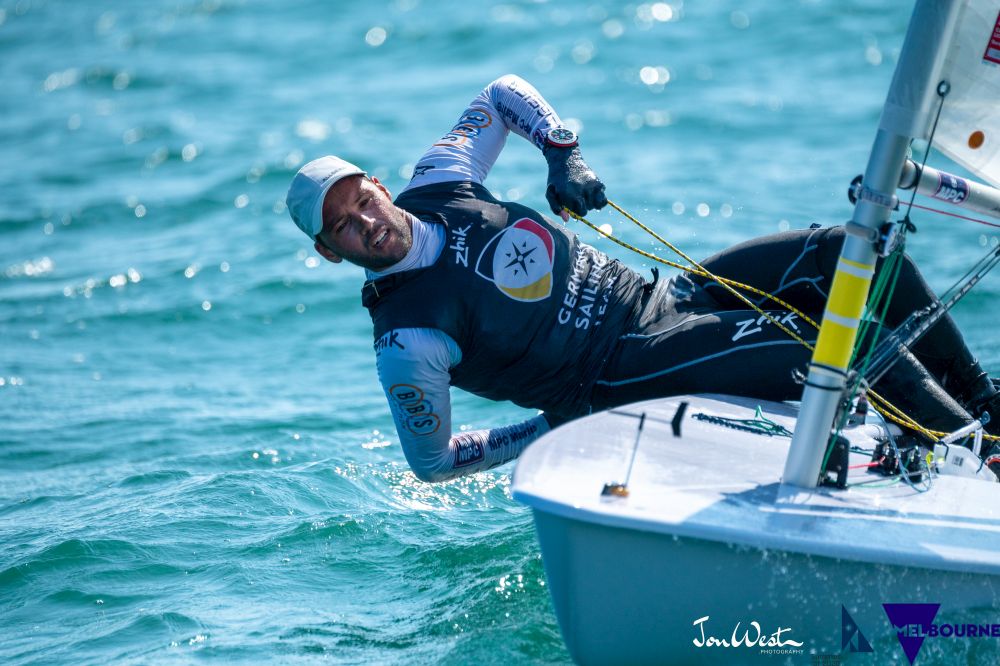 A glorious Melbourne day with clear blue skies and a challenging wind from the south-east greeted sailors on the final day of qualifying at the ILCA Laser Standard Men’s World Championship at Sandringham Yacht Club.

The sailors responded with good behaviour on the start line and, in contrast to the previous day’s black flags and general recalls, all three fleets got away cleanly whenever they came under starter’s orders.

All six races of the qualifying series have now been sailed and the fleets will be split into Gold, Silver and Bronze for the remaining three days of the championship, meaning the top 40 placed sailors will come together for the first time in the regatta.

Philipp Buhl (GER) leads at the half-way mark after another superb display of Laser sailing. Buhl finished fourth in the first race of the championship, but the German has now recorded five consecutive bullets to go into Gold Fleet with a remarkable 5 points after discarding his worst result.

“It was a great day,” said the smiling German. When asked why he was sailing so well, he replied, “Sometimes it just happens. The shifts played into my hands. You either had the shift or you didn’t and all day I did.

“I’m very happy with the way I’m sailing, but now we go into Gold Fleet and it all changes.”

Buhl is closely followed by Frenchman Jean-Baptiste Bernaz, who added a fourth win to his scorecard today, along with a fourth place, to be four points behind. Rio Olympic silver medallist, Tonci Stipanovic (CRO) also had a race win and holds third overall on 12 points.

Ranked world number one, Australian Matt Wearn is putting together a solid regatta and is in fourth place, 10 points behind Buhl. He got caught on the wrong side of some shifts today and was 11th in the final race, but can discard that and go into Gold Fleet in good shape.

“There were persistent shifts on the first beat and I just couldn’t get to them,” he explained.

“It was better,” the 1996 and 2004 Olympic Laser champion said. “It was good sailing… good conditions but tricky shifts.

Unfortunately, the forecast for the first day of Gold Fleet sailing is not encouraging. There is likely to be little wind, but with thunderstorms and rain showers expected to sweep across the course area.

To date race management has been excellent, getting two races in on each of the three days despite a wide variety of wind strengths and directions. They will certainly be tested tomorrow, but while the forecast for Saturday is also for rain, the wind should be stronger and from the south.

Whatever happens, this fascinating world championship makes for riveting viewing as the top 10 sailors all remain within reach of the medals.