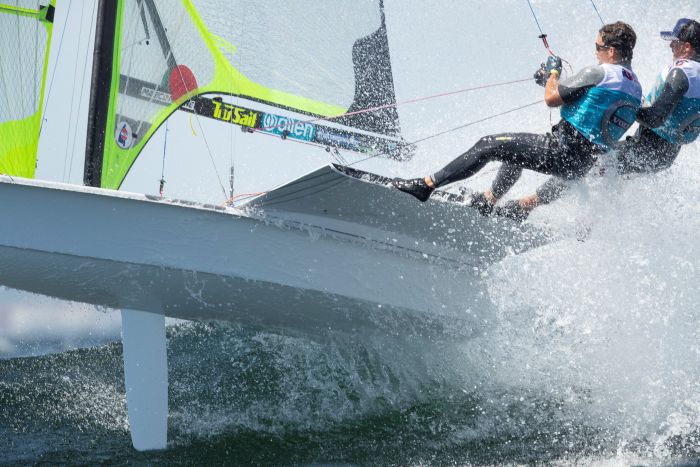 49er: A bag of bullets for Burling and Tuke

They’re not long back in the boat after their two-and-a-half year holiday in the America’s Cup and the Volvo Ocean Race, but already Peter Burling and Blair Tuke are back at the top in the 49er after firing three bullets in a row today. “Nice day out,” smiled a typically straightforward Burling, checking carefully over every part of the rig after a testing outing for the 96-boat fleet.

It’s not that it was uber-windy, but the easterly breeze had kicked up some big waves in Weymouth Bay, offering plenty of opportunity for an unwanted high-speed pitchpole. The Antipodeans are muscling in on the European party, both Kiwis and Aussies enjoying the big breeze, big wave conditions. The only European team in the top four is Spain’s Diego Botin and Iago Lopez who were almost as dominant as the Kiwis in their third of the qualifying draw, scoring 2,1,1. “It’s so nice to be racing in good conditions again,” said Lopez. “Today was a great day for 49er sailing.”

The Spaniards are just a point off the Burling/Tuke lead, and just two points adrift of the Spanish are the Aussie brothers Will and Sam Phillips who scored three second places behind the unstoppable Kiwis. “Got to be pretty happy with that,” said Will after snapping at the heels of the reigning Olympic Champions all day. “Still a long list of things to work on, but we’re getting there with our starting and boat speed was pretty solid.” His favourite bit of the day was the two-sail blast back across Portland Harbour, back in the relative safety and comfort of the flat water after the lumpy challenge of the Bay.

Rio 2016 bronze medallists Erik Heil and Thomas Ploessel were fast out of the blocks in the morning, winning their first heat, but ran out of steam as the day progressed. “I was getting tired,” smiled Heil, sounding like a broken man. They pitchpoled in race two but recovered to a still respectable 10th place. “I was losing concentration because we were getting tired.” Then they capsized again in the final race of the afternoon, this time only managing an 18th. Despite their topsy-turvy moments, the Germans hold on to 7th place overall.

Austria’s Benjamin Bildstein and David Hussl struggled in yesterday’s conditions but got their mojo back on day two, scores of 1,1,5 lifting them to 12th overall. Great Britain’s Chris Taylor and Sam Batten had just put together a good set of results – 7,4,9 – and were enjoying the ride back home across the harbour when their forestay snapped at the top terminal. “The rig dropped back but the boom sat on the leeward wing and sort of supported the mast until we had time to re-tie the kite halyard as a temporary forestay,” said Taylor. So no real harm done, and a big day’s sailing that has planted a big grin on every face of the 49er fleet.

The two halves of the 49erFX qualification series took place today in a 15-18 knots easterly in Portland Harbour, delivering spectacularly fast conditions for the women’s skiff fleet. While Charlotte Dobson and Saskia Tidey have upped their game significantly in lighter conditions, the British duo were back in their favourite breeze – strong and gusty. Scores of 1,1,2 lift them to top of the leaderboard, tied on points with second-placed Brazilians, Martine Grael and Kahena Kunze.

A container ship near the Portland shore on the right-hand side of the course prevented a straightforward tack into the corner, forcing a couple more tacks out of the teams. “We quite liked the container ship there,” said Dobson. “It made it a bit more interesting. The gusts were pretty hard though, you couldn’t see them coming. There’s quite a lot of weight in the wind and being so close to the shore there wasn’t much warning before the next gust hit. So it kept you on your toes, you couldn’t really relax for a moment.”

The Brits’ closest rival on their side of the draw is the young Swedish team who were leading after day one, Vilma Bobeck and Malin Tengstrom, who continue to tear round the track at high speed, scoring 7,4,1 from the day. “We train with them a lot,” said Dobson. “They’re probably a bit faster than us in the breeze but we managed to be a bit more consistent on the race course.”

The other side of the draw saw a three-way battle play out between three 49erFX World Champions past and present. The reigning Olympic Champions, Grael and Kunze, had the best of it with 1,1,3. The Olympic silver medallists from New Zealand, Alex Maloney and Molly Meech, notched up an ever-improving 3,2,1, lifting them to fifth overall, one place behind the other high performer of the day, the reigning World Champions Annemieke Bekkering and Annette Duetz of the Netherlands. The Dutch were still grinning after a fun day on the water that brought them scores of 2,3,2. “We love that stuff,” said Bekkering. “We don’t get to sail in such flat water very often, and the boats were flying today.”

Bekkering and Duetz are definitely enjoying the weather so far in Weymouth, although the breeze is set to drop in the coming days. They’re strong in all conditions, but so far the higher wind – which floated between 15 and 20 knots – is making life harder for their rivals for Dutch Olympic selection. A few weeks ago Odile van Aanholt and Marieke Jongens won the Hempel Sailing World Cup regatta in Genoa, Italy, in very light winds. This gives them a significant advantage going into the second and final part of the Olympic trials here in Weymouth. So far, Bekkering and Duetz are doing a good job of staying in the fight, but that is exactly what the reigning World Champions need to do if they hope to stay in contention for that coveted place at Tokyo 2020.

Nacra 17: Gimson and Burnet in an Italian sandwich

Ruggero Tita and Caterina Banti (ITA) continued their relentless march at the top of the leaderboard, notching up two more first places in their qualifying group, only falling foul in the last race of the afternoon. “We were fast upwind and going well downwind in the waves,” said Banti. “We just didn’t start quite so well in the last race and couldn’t pull through.”

The only race the Italians didn’t win was taken instead by Great Britain’s Ben Saxton and Nikki Boniface who enjoyed getting out in the big waves after a few light-airs regattas. “We did a lot of training over the winter in strong winds and big waves,” said Saxton. “It took us a race to remember what to do, but it felt good after that.” The 15 knot breeze did drop away to more like 10 knots by the end of the afternoon, although was still testing enough for the overworked crews doing all the gunnel running fore and aft along the 17ft hulls.

There were certainly enough gnarly moments to catch out some of the crews crashing into the back of the nastier waves. Two teams wiped out their aluminium bowsprits, leaving them without the ability to fly the gennaker downwind. One of those was the Spanish team of Tara Pacheco and Florian Trittel who failed to get a result in the middle race but made amends with a 2,3 in the other two heats to sit in fourth overall.

On the other side of qualification, another British crew – John Gimson and Anna Burnet – sailed a stellar day to rack up 1,1,2 and rise to second overall. The British team now find themselves sandwiched between two Italian crews, the leaders five points ahead and just a point behind in third overall, Vittorio Bissaro and Maelle Frascari.

Back in 15th place are Nathan and Haylee Outteridge, still discovering the quirks of the Nacra 17 in big waves. The Australian siblings made rapid progress last season in the flat water, and now it’s up to Nathan to see if he can master a different beast on these same Olympic waters that propelled him to 49er gold at London 2012.

There’s a widespread acknowledgement that Weymouth Bay is proving a useful testing ground for the kind of big-wave swell that competitors might encounter at next year’s Olympic Regatta in Enoshima. Out of all the Olympic disciplines, the skiffs and the foiling catamaran find the waves the biggest challenge, so every day of experience in Weymouth Bay counts as a vital day of discovery on the road to Tokyo.