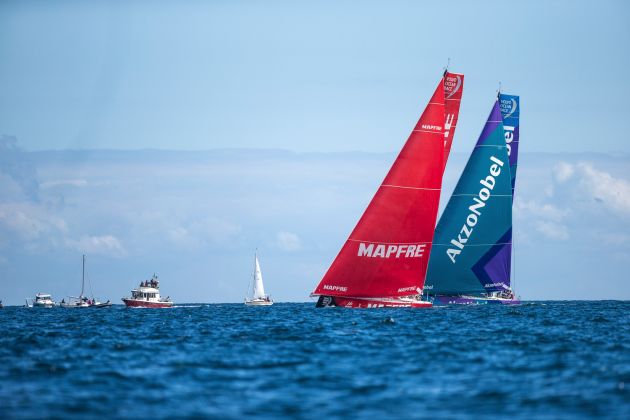 MAPFRE maintained their near-faultless performance in Volvo Ocean Race qualifying – and gave themselves the best possible chance of completing overall victory in the Leg Zero series – as they led the fleet over the finish line on a short opening stage of the final race out of Saint-Malo.

Extended periods of extremely light weather meant that the Saint-Malo to Lisbon leg had to be split into two parts.

As expected, the Volvo Ocean 65s stayed tightly bunched on the first of those, a drag race towards Le Grand Lejon. Vestas 11th Hour Racing were neck-and-neck with MAPFRE for the lead, with the Spanish side just pipping them to the line.

Dongfeng Race Team grabbed third ahead of Turn the Tide on Plastic and team AkzoNobel. Preliminary unofficial results gave Team Sun Hung Kai/Scallywag and Team Brunel the same time, with less than a mile between the first and last teams in the seven-boat fleet.

Now that the teams have completed their ‘Sunday drive’ – a 25nm sprint in just 10 knots – they can prepare for the restart which will begin from Chaussé de Sein at 0900 UTC on Monday. It will be a staggered start based on the finishing deltas from Sunday.

The fleet will start with light south easterlies that will quickly die and then come back from the west. This will be a critical transition to manage as the whole race course will favour the leaders and punish the stragglers.

The fleet will negotiate the passage of a cold front early Tuesday morning and the new wind will set them up for a downwind drag race towards Cape Finisterre, the northwestern tip of Spain. It will be a race for their competitive lives – with light winds chasing them as a ridge of high pressure again pushes into the normally tempestuous Bay of Biscay.

“Leg Zero has been really good for us,” said MAPFRE skipper Xabi Fernández, whose team have won two out of the three races completed so far. “Saint-Malo to Lisbon is the last stop so it's not quite over yet but I'm so happy with the team, the boat… Everything seems to be working out.”

After negotiating the narrow channel between Cape Finisterre and the out-of-bounds shipping channel, they'll have a pretty simple run down the Portuguese coast. There's no major strategic play here, just pure speed before a handbrake turn into the Tagus river and the finish in downtown Lisbon.

“You only enter races to win – but the forecast is flukey so everything’s on the table,” said Vestas 11th Hour Racing skipper Charlie Enright. “Everyone’s expectation is to be competitive and to continue to refine the areas that we realise need work.”

Overall standings after 3 of 4 completed races in Leg Zero:

While an overall winner will be declared, no points will be carried forward to the Volvo Ocean Race itself, which starts on 22 October from Alicante.