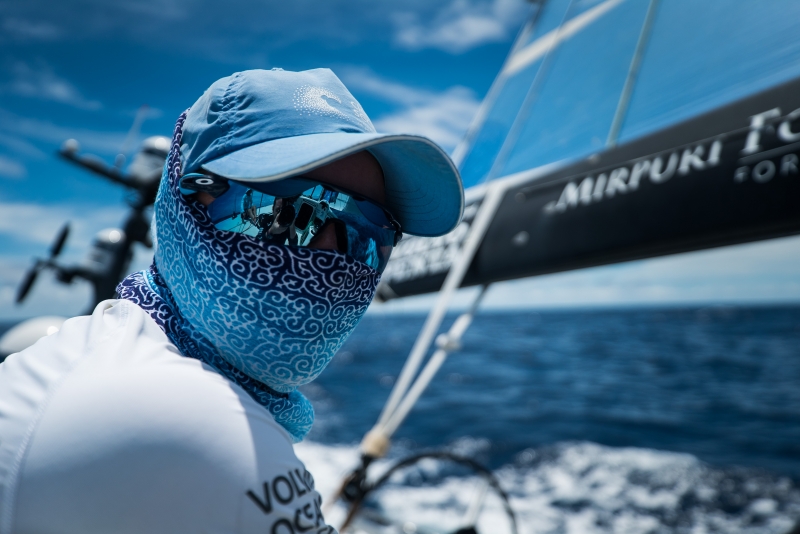 The new week started with a reshuffle of the Leg 4 leaderboard as the seven-strong Volvo Ocean Race fleet eased into the Doldrums for the second time so far this race.

After six days at sea, racing is so tight between the top five teams that the smallest of gains or losses can propel them up the rankings or send them plummeting down the positions.

This was certainly the case on Monday as Vestas 11th Hour Racing became the new Leg 4 leaders while Dongfeng Race Team, the table-toppers for the first five days of racing, found themselves in fourth.

Earlier Monday it was MAPFRE who occupied the top spot but at 1300 UTC the Spanish team had slid to fifth, while Turn the Tide on Plastic had rocketed into second.

In reality the top five are neck and neck, just six miles splitting them in terms of distance to finish, and reason for the reordering is down to each team’s lateral positioning.

As the most westerly boat in the fleet, Vestas 11th Hour Racing are now closer to the next waypoint than any other team. But whether this is the strongest position tactically remains to be seen.

Dongfeng are the furthest east of the fleet, with MAPFRE, Turn the Tide on Plastic and team AkzoNobel inside them.

With the current forecast the fleet is facing several hundred miles of light winds through the Doldrums, characterised by clouds, thunder storms and squalls that can hit without warning.

The most direct route to Hong Kong would see them sail a more north-westerly course, but for all seven teams the key to success lies in how soon they can escape the clutches of the Doldrums.

That means heading north as quickly as possible to get to the north-easterly trade winds and the better, more stable breeze they promise.

The next 36 hours will arguably be among the most vital of the 6,000-mile stage – and could ultimately determine the Leg 4 podium despite there still being more than 3,000 miles left to sail.

The enormity of the situation has not been lost on the sailors.

“We've just had a post sunset total race reset,” said AkzoNobel’s Luke Molloy. “Vestas, MAPFRE, Dongfeng and Azko are all bunched together with TTOP not far behind.

“The moment is intense, it could be the making or breaking of the race over the next hour.”

Vestas 11th Hour Racing crewmember Tom Johnson added: “Everyone’s had their chance at leading in this front pack. You’ve just got to make the right tactical call, get the right cloud, take the shift and it’s all up for grabs.”

While the battle raged for first place, Team Brunel in sixth, around 20 miles south of the leading group, had other things than just racing to contend with when they bore the brunt of a particularly violent electric storm.

“The stable breeze instantly changed and before we knew it we were becalmed,” skipper Bouwe Bekking revealed. “Then a huge lightning strike hit, so close the sparks were flying off the mast and runners.

“Rome [Kirby], who was driving, was lying flat on the deck, just from the shock of the massive sound as well.”

None of the sailors were injured, and miraculously their boat electronics survived intact too.

Whether the nerves of the sailors across the fleet survive as well over the coming days is an open question.