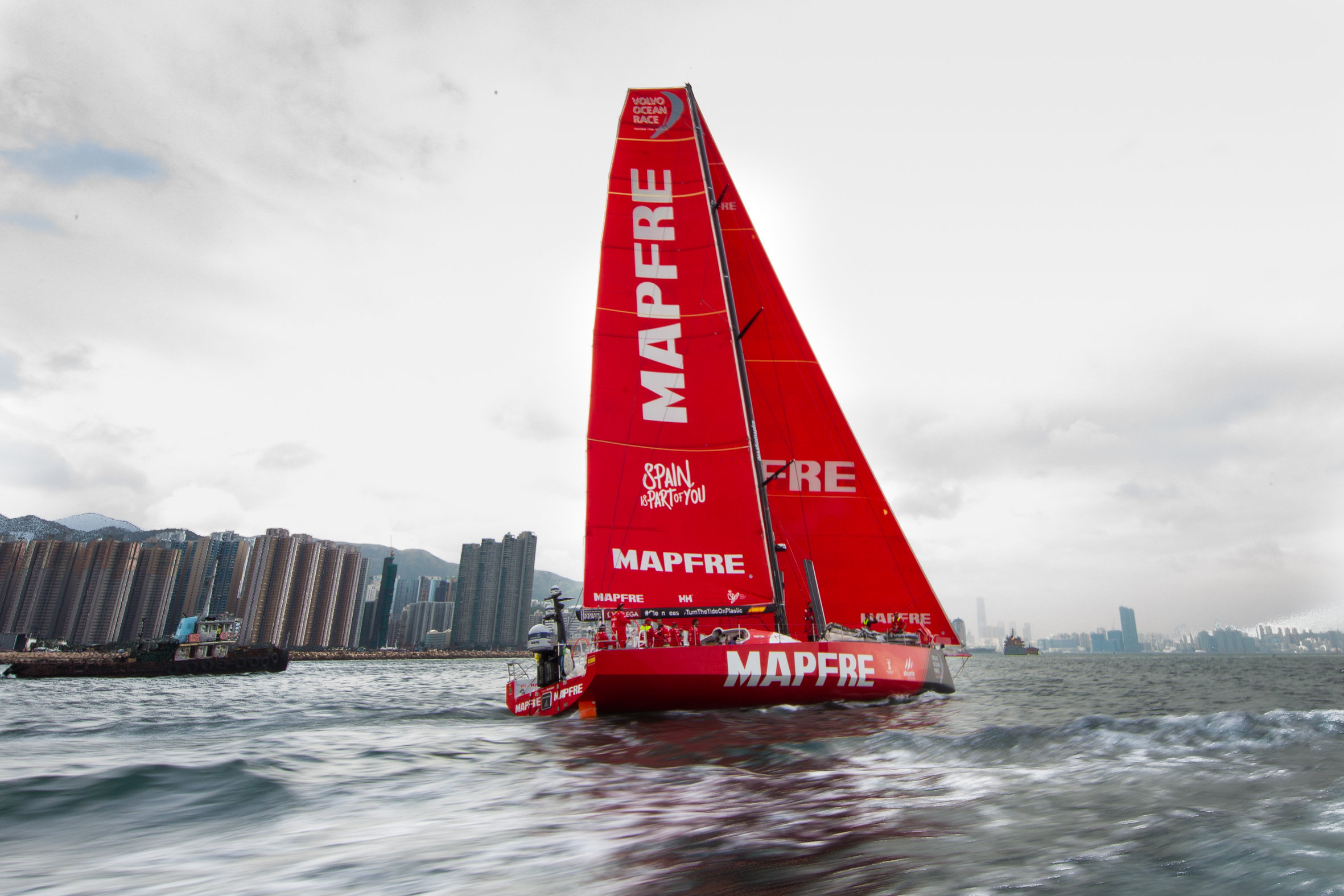 After 18 days of sailing in the Pacific, and 6000 miles between Melbourne (Australia) and Hong Kong, MAPFRE crossed the finish line this morning in fourth place. The leg has been, without a doubt, a true challenge. Crossing the equator and the Doldrums became a true puzzle for the fleet, and yet the final result has enabled Xabi Fernández’s team to hold on to their overall lead of the round-the-world race.

“Conditions have been really tough,” Cantabrian sailor Pablo Arrarte explained on arrival to the dock.

“The Doldrums were not at all clear, and perhaps there were signs that there was a northern tendency, and yet we weren't so keen to follow it, so maybe this was the reason we were left a little behind the leading three boats.”

Joan Vila added, “In the Doldrums we were left a little behind due to the time we spent in the doldrums, a little worse than the leading three boats we were part of, and we were in the worst area to get through them.

“One of them passed through the west, the others not so well but better than us to the east, and from then on it was quite difficult to aim for a podium position, even though we did our best to do so.”

Despite the fact that when entering the northern trade winds MAPFRE was quite far from the leading group, Xabi Fernandez's team continued pushing hard to get the most out of their boat until reaching Hong Kong.

It was a full effort from the team, which has meant the team could hold on to their overall position ahead of Brunel and Turn The Tide On Plastic, defending their overall leadership with four points advantage over the Chinese team, skippered by Charles Caudrelier.

“At times you have to be a little more stubborn, and not let yourself be led by what you feel is better, and in this leg it has been a true lesson. As far as everything else is concerned, we knew that the moment when we wouldn't make a podium position would arrive,” Arrarte said.

We knew that the leg was tricky and it wasn't one of those legs where perhaps there were more opportunities for everyone. I actually think that it has been a really good thing that Scallywag has won this leg, and didn't get between Dongfeng and us, and if we look at the overall classification, the points aren't bad for us.”

The leg victory this time went to the local team, David Witt’s Scallywag, which crossed the finish line with a three-hour advantage over Dongfeng and almost seven over AkzoNobel; second and third place respectively.

Sweets and fresh food
In the last few days the desire to be finally on solid ground was more than obvious, after a leg where the Doldurms, the lack of wind, the clouds, storms, and heat have not given Basque skipper Xavi Fernández’s crew a moment’s rest, as they counted down the hours to crossing the finish line.

Reaching the dock and solid land after 17 days at sea is a true gift, and the smiles, hugs and jokes on board made it more than obvious. Clearly thinner but each of the crew of MAPFRE had a huge smile on their faces.

Galician sailor Tamara Echegoyen when asked what she most wished to do, responded: “The first thing has already been accomplished; to eat a sweet!! I’ve been thinking about it for over 15 days and I’ve finally been able to taste it,” she said smiling.

“Now we are going to try to rest as much as we can, recover our bodies as much as we can after these long legs, and get ready for the next one. So it is about enjoying the rest, a good bed, a good shower and getting to know Hong Kong a little if we have time, and if not, to keep working,” Echeogoyen said.

MAPFRE, as a competing team in the Volvo Ocean Race, wishes to offer their most sincere condolences for the family and loved ones of the deceased as well as offering our full support to the Vestas team in such difficult times.