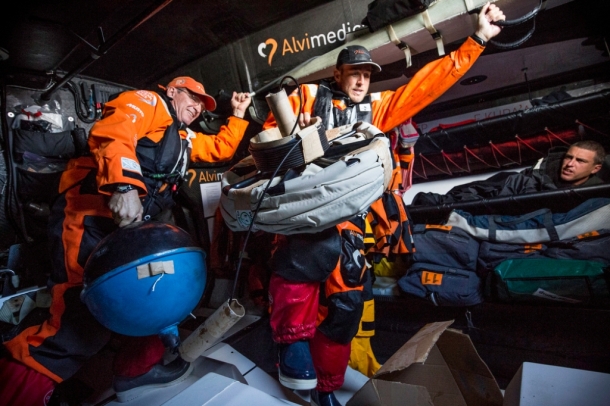 The Volvo Ocean Race fleet has taken some time out from the thrilling Leg 5 racing through the Southern Ocean to assist with an important environmental project.

As planned, all six boats dropped buoys laden with scientific equipment – or ‘drifters' – to help collect oceanic data from one of the most remote areas of the world.

The U.S.-based National Oceanic and Atmospheric Administration (NOAA) collects ocean and weather data to provide mariners with accurate forecasts of seas, as well as coastal forecasts and regional climate predictions.

It takes a lot of effort to maintain these observations in all of the ocean basins to support these forecasts, and NOAA can't do it alone so they asked for the assistance of the Volvo Ocean Race fleet in dropping the drifters.

The study is particularly close to the heart of Will Oxley, the navigator on board Team Alvimedica (Charlie Enright/USA), who is a marine biologist as well as being a top offshore sailor.

“It’s believed the Southern Ocean absorbs up to about 60 per cent of the heat and CO2 produced by we humans,” he explained.

“So the Southern Ocean is a very important ‘sink’ that is absorbing CO2 and slowing the pace of global warming.

“However, it is having an impact on the ocean and we need to better understand what that impact is.”

Partnerships are critical to maintaining a network of free-floating buoys, known as drifters, and NOAA asked the Volvo Ocean Race fleet to assist them on Leg 5.

The buoys will drift with ocean surface currents and transmit data on surface pressure and ocean currents through a global satellite network.

Martin Kramp serves as the ship coordinator at a support centre of the Joint Technical Commission for Oceanography and Marine Meteorology of World Meteorological Organisation, and UNESCO’s Intergovernmental Oceanographic Commission.

“Organised ocean sailing events, such as races and rallies, are a new component of growing importance in volunteer ocean observation,” explained Kramp.

“We are very happy that the Volvo Ocean Race is collaborating with us as a part of the current race.”

Meanwhile, Team Brunel (Bouwe Bekking/NED) had opened up a 51.1-nautical mile (nm) lead on Monday (0940 UTC) with 4,750nm to go to the finish in Itajaí, Brazil, and Cape Horn still to negotiate on the toughest of all nine legs.

MAPFRE had a scare on Sunday when they heard a loud bang from their bow, but they could find no damage, although they reinforced the area with battens to be sure.

In the 2011-12 edition. skipper Iker Martínez’s boat Telefónica suffered delamination, forcing a pit-stop for repairs, and he is very wary of a repeat.

So far, however, the one-design Volvo Ocean 65s are withstanding the toughest conditions they have encountered in the race so far.