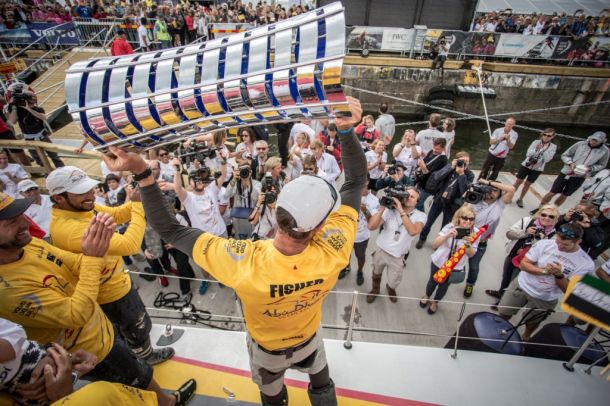 Highlights: It was a tactical and long race, passing Gibraltar, Cape Verde, and negotiating the Doldrums and the St Helena High. After breaking a rudder, Dongfeng Race Team went south and nearly caught up with the leaders, finishing in second place only 12 minutes after winners Abu Dhabi Ocean Racing. The all-female crew, Team SCA, snatched sixth place from MAPFRE in the final miles after the Spanish team stalled under the shadow of Table Mountain.

Highlights: The leg, which changed Team Vestas Wind's race story, started in 40 knots of breeze, when the fleet left Cape Town. The Agulhas Current and the Indian Ocean, plus a threatened cyclone, heralded a challenging stage for the fleet. Dongfeng Race Team suffered a broken mast track – a recurrent problem for them early in this edition – but they solved it with an on-the-move repair. Then, on November 29, disaster struck. Team Vestas Wind hit a reef on the Cargados Carajos in the Indian Ocean. Chris Nicholson led his team to safety in the middle of the night, in shark-infested waters. The other six boats continued to sail to Abu Dhabi where Team Brunel claimed another tight victory. Dongfeng Race Team finished second again.

Highlights: A first victory in the Volvo Ocean Race for a Chinese team. And what better place to do it than in Dongfeng Race Team’s home port of Sanya? But to achieve their landmark win, Charles Caudrelier and his team were made to battle for 23 and a half days. The fleet sailed through the Gulf, along the Indian coast, around Sri Lanka, and through the Malacca Strait before finally punching through the South China Sea.

Highlights: This was MAPFRE’s moment of glory in the City of Sails. As they approached the Luzon Strait, Team SCA and Team Brunel tacked north. The other four boats continued across the top of the Philippines. MAPFRE had problems with the boat's electronics and they were left effectively sailing blind before it was repaired. With Xabi Fernández as a skipper, MAPFRE bounced back to cross the line in first place.

Highlights: Cyclone Pam forced the race organisers to delay the leg start. The boats left Auckland three days late on Wednesday, March 18. Three teams endured Chinese gybes and most suffered some sort of equipment failure in the Southern Ocean. The conditions finally improved and Team Alvimedica led the fleet around Cape Horn. Dongfeng Race Team’s hopes were rocked when their mast broke close to the Horn. They abandoned the leg, after a brief stop in Ushuaia, Argentina, and made their way to Itajaí under jury rig and motor. The first four boats were within five nautical miles (nm) of each other at the finish, but the Emirati team had made some small gains during the night and defeated MAPFRE for first place.

Highlights: After the extreme Leg 5, the next stage eased up with supreme sailing conditions – and lots of seaweed. Charles Caudrelier’s Dongfeng Race Team had suffered bad luck when they dismasted in Leg 5, and it appeared that the curse  had still not lifted, as their electronic water-maker stopped working within a couple of days of starting the stage. Fortunately, they managed to repair it. After crossing the Doldrums, the fleet negotiated the Gulf Stream and the Chinese boat took the lead, winning Leg 6 by just three minutes ahead of Abu Dhabi Ocean Racing, followed by Team Brunel less than an hour astern. The perfect result for the team for the team after breaking their mast in the previous leg.

Highlights: Huge crowds waved the fleet farewell after a very successful first visit to Newport for the race. A high-pressure system above the Azores posed a dilemma for the navigators: go south on a longer, but supposedly faster route, or go direct to Lisbon on a course which could offer lighter winds. The leg had poignant memories for Team Brunel’s Bouwe Bekking, whose boat movistar sank on the same stage in the 2005-06 race. However, he proved how successfully he has put that incident behind him with a 21-minute win over MAPFRE in Lisbon.

Highlights: The return of Team Vestas Wind, following their grounding on a reef in Leg 2 and the breakthrough leg victory of Team SCA, were two of the most memorable moments in the race, never mind on a leg, which was finished in under four days in the teeth of a gale. Team SCA snatched an early lead, successfully negotiating the ‘Costa do Morte’ or ‘Cape of Death’ with its 40-knot winds and wild sea state. After a race in which they spent much of the time trailing their rivals, Team SCA finally enjoyed their moment of glory as leg winners with Team Vestas Wind making a fairytale comeback in second. Abu Dhabi Ocean Racing finished third and were on the verge of lifting the trophy with an unassailable lead.

Highlights: The last leg featured three ports – Lorient, a pit-stop in The Hague, and the finale in Gothenburg. Team Alvimedica received their reward for their leg-on-leg improvement, grabbing an early advantage in the English Channel and building it gradually to lead the fleet into The Hague. After a short, but manic pit-stop in the sailing-crazy city, the Turkish/American boat edged to victory in Gothenburg despite a frightening moment or two in the river Göta älv, when their boat parked up as the wind dropped away to nothing. Behind Charlie Enright’s young crew, fifth-placed Abu Dhabi Ocean Racing celebrated overall victory.