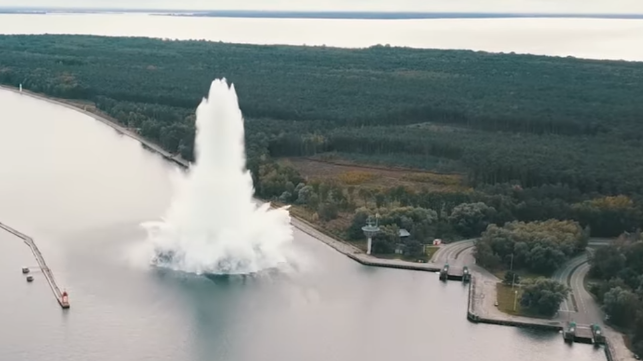 On Tuesday, a giant WWII-era “earthquake bomb” detonated unexpectedly near the port of Swinoujscie, Poland as an explosives ordnance disposal team attempted to disable it.

Last year, a Royal Air Force “Tallboy” bunker-busting bomb was found nose-up in the sediment at the bottom of Swinoujscie's Piastowski Canal (Piast Canal). The 12,000-pound bomb was believed to be a relic of a successful RAF raid on the German pocket battleship Lutzow in April 1945. It was the largest WWII-era unexploded device yet found in Poland.

After extensive planning and preparation, a Polish Navy dive team began work to neutralize the bomb on Monday. The five-day evolution entailed digging out around the aging munition, then gradually burning out the 5,200 pounds of explosive mixture inside it in a controlled manner (deflagration). At a press conference marking the start of the project, Polish Navy spokesman Lieutenant Commander Grzegorz Lewandowski warned that the task would be hazardous because the explosives may have become less stable over time, rendering them sensitive to vibration or impact.

The first phase of deflagration was scheduled to begin on Tuesday, before a change in the weather. A precautionary evacuation order for all civilian personnel within a 2,500 meter radius of the site was in effect.

At about 1430 hours, the bomb detonated unexpectedly, sending a geyser of water skyward. The Polish Navy dive team had already cleared away from the scene, and no injuries were reported.

“All the assumed safety measures took into account the possibility of the deflagration process going into detonation,” Lewandowski said in a statement. “The [bomb] can be considered as neutralized, it will not pose any more threat to the Szczecin-?winouj?cie fairway.”

The “Tallboy” bomb was a UK-designed munition built to penetrate deep underground and detonate after a delay, shattering fortifications from below. Its thick steel case made up more than half of its weight, and when dropped from a height of 12,000 feet, it could penetrate up to 16 feet of hardened concrete before detonation.