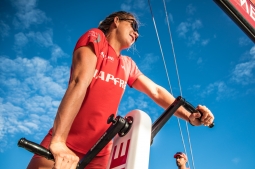 The Volvo Ocean Race fleet was buoyed by the arrival of new breeze on Thursday, potentially spelling an end to several days of torment at the hands of the Doldrums.

The seven teams hit the Doldrums – a fickle band of low pressure notorious for its calm wind – on Monday, and since then have been inching north at painfully slow speeds in sweltering tropical heat.

But on the ninth day of racing, with almost exactly 3,000 nautical miles remaining of the 6,000-mile stage from Melbourne to Hong Kong, it had all changed with new wind of up to ten knots filling in.

And with the new conditions came a new leg leader – a few well-timed gybes shot Vestas 11th Hour Racing ahead of their rivals and to the top of the table, if only by the thinnest of margins.

Vestas 11th Hour Racing might be in front but it’s excruciatingly tight at the top. The 1300 UTC position report put Dongfeng Race Team and team AkzoNobel in second and third, both less than one mile behind.

MAPFRE trail by 3.6 miles, with Turn the Tide on Plastic just 0.1 miles further back.

Bouwe Bekking’s Team Brunel were still celebrating their newfound speed when they were knocked flat in a thunder storm overnight.

The breeze under the cloud swung 180 degrees, pinning the masthead code zero, the team’s largest sail, back against the rigging and forcing the boat onto its side.

The incident halted the team’s progress temporarily but their problems were compounded when they hit a windless patch on the wrong side of the cloud, powerless to keep pace as closest rivals MAPFRE and Akzonobel sailed off.

“Last night was breezy in the front end of the clouds – we were ripping along at 18-20 knots, then the breeze did a full 180, and when you have full sails up it’s hard to keep up,” Brunel helmsman Rome Kirby said.

“The masthead zero backed against the rig and put us on our side. We were pretty close to MAPFRE and AkzoNobel but we ended up on the wrong side of that cloud and lost out to the other guys.”

Today they are around 45 miles astern of the leader. The only consolation to their dramas was the opportunity to have a wash in the downpour after days of sweating through the Doldrums.

After pulling back to within seven miles of the leaders, Team Sun Hung Kai/Scallywag were the last to hit the breeze – and at the latest position update they had paid the price, lying more than 100 miles south of the front group.

The computer puts them in sixth place ahead of Team Brunel because of their more westerly position, but tactically Dave Witt’s crew is probably trailing the fleet with a lot to do to make up ground.

“This is a really important leg for us,” skipper Witt said. “It’d be catastrophic if we come home last. Everyone understands the situation we’re in with this leg – it’s the most important leg of the whole campaign. We’ve got to try to remain positive and concentrate on winning the leg, right up until the finish.”