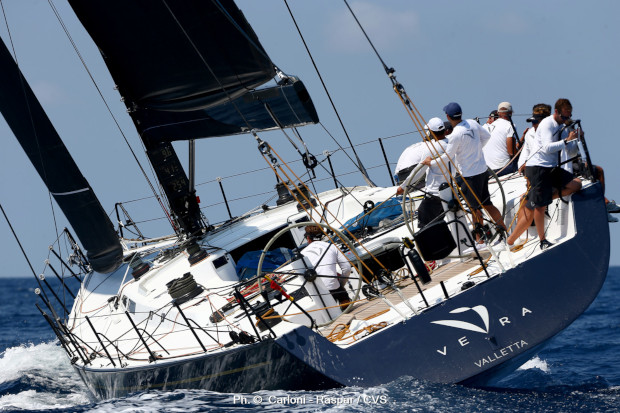 Palermo-Montecarlo, the fifth and final event of the International Maxi Association’s Mediterranean Maxi Offshore Challenge 2018-2019, set sail from Sicily at midday today with crews anticipating a long, tactical race north along the Sardinian and Corsica coasts to reach the Principality.

This is the 15th running of Palermo-Montecarlo, originally designed by the Monaco Consul and the City of Palermo Sports Council, to ‘unite two historically friendly cities through a yacht race’. Today the route takes competitors past Porto Cervo, where they are obliged to pass through a gate set by the Yacht Club Costa Smeralda that works in association with the event’s main organising clubs, the Circolo della Vela Sicilia and the Yacht Club de Monaco. From there navigators have the choice of passing through the Strait of Bonifacio and up the west coast of Corsica to Monaco or, if conditions dictate, sailing the longer course east of Corsica.

Today Palermo-Montecarlo is one of the Mediterranean’s most up and coming offshore races, with 51 boats competing this year, ranging from 30 footers up to the Reichel/Pugh 83, Vera of Argentinean and Mediterranean Maxi Offshore Challenge favourite, Miguel Galuccio.

Despite a light forecast for the start, the fleet got off at midday with a welcome northwesterly gradient/sea breeze of 10-12 knots making for a beat away from the Mondello beach and Palermo’s dramatically mountainous shore. The maxis started at the leeward end of the line and Vera rapidly edged out into the lead.

“It is a very interesting course,” observed Galuccio prior to leaving Palermo’s Marina di Villa Igiea this morning. “We did the 151 Miglia and the Rolex Giraglia and this is a bit longer. Having Bouwe on the team for this type of race will be interesting, a new experience for me,” he adds, referring to his tactician, round the world race veteran Bouwe Bekking.

Being the scratch boat is also a new experience for Galuccio with the pressure now on them to fend off challenges from the other maxis and even the competitive TP52 @robas2 of Frenchman Gérard Logel. “Of course it is a good thing that we could get line honours, but it will be competitive,” continues Galuccio, who is sailing his first Palermo-Montecarlo, as is Bekking.

The Dutch sailing legend was reluctant to make any predictions of what would happen in the race. “In this part of the world, you have forecasts, but it is more a case of what you see.

“I expect that we’ll go west to see if we can get around the little ridge. If we can, then there should be a light running breeze and we might make a little gain, but there will be a lot of snakes and ladders in this race. It is always tempting to sail the direct course, but that just looks like it will be too expensive in the long run.” As to the option of leaving Corsica to port, Bekking says “you would have to be very brave! Good luck to anyone who goes that way!”

At the time of writing Vera was making 11 knots, taking the most extreme westerly route in an attempt to remain in the breeze, albeit some 45° off course.

Hoping for more breeze than forecast was the crew on the VO65 Ambersail 2. The Lithuanian team competed in Palermo-Montecarlo two years ago on their VO60 and skipper Raimondas Šiugždinis admitted this morning: “This boat is not ideal for the forecast. We would prefer 30 knots! We will do the best we can.” The boat has a particularly intense racing program, campaigned by three crews and is fresh from competing in the Rolex Fastnet Race and is next heading to the Maxi Yacht Rolex Cup in Porto Cervo over 1-7 September.

Another heavily campaigned boat taking part is the Marten 72 Aragon of Dutch joint owners Andreas Verder and Arco Van Nieuwland. They sail with a mix of family and pros including top French navigator Oliver Douillard – another Palermo-Montecarlo first timer. “It is a typical Mediterranean race. The forecast is very light so we have to be opportunistic and take what we can see,” Douillard advises. “A lot will depend on position and timing. It could be downwind to Porto Cervo. After that there could potentially be a northeast wind to the north of Corsica. We could sail direct…”

A smaller Marten 68, also largely with a family crew, is Cassiopeia. Hungarian Kristof Nobilis is racing with other family members Kornel and Barna while son Demeter is registered as skipper. The boat competed in the Palermo-Montecarlo two years ago and this time is only being sailed seven up, so everyone on board is “doing everything. It is fast and you don’t need a huge crew,” as one crew explained, adding their approach is more for pure enjoyment compared the other well known Hungarian maxi team, Márton Józsa's Reichel Pugh 66 Wild Joe.

Having not quite managed to mount a campaign for this America’s Cup, Renato Azara is competing in the Davidson 69, Adelasia di Torres, better known as Pendragon VI. Azara, who has not done the race before, has onboard a mix of amateur sailors and pros, such as Slovenia grinder Iztok Knafelc and an international cast including Omani pro navigator Sami Al Shukaili. Azara’s campaign has a cause, similar to that of Oman Sail, in trying to get Sardinians, especially children, to rediscover their maritime heritage. Sardinia was a major Mediterranean seafaring nation as long ago as the Bronze Age. Plus “sailing is one of the best sports because it involves all the natural elements – the sun, the sea, the wind,” explains Azara. “It helps to build kids mentally and physically and help them learn to make choices.”

The competitors have a tricky race ahead of them to Monaco. At this early stage the entire fleet has chosen to err heavily to the left of the race course where there is believed to be better pressure tonight.

For more information and to following the yb tracking visit www.palermo-montecarlo.it