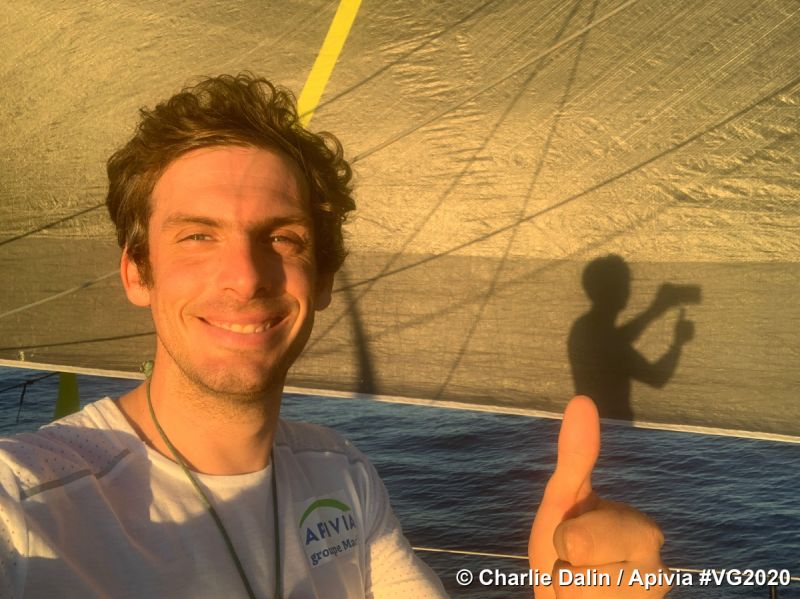 Vendee Globe - the road from Rio

After 65 days racing and over 23,000 nautical miles sailed on the course, the Vendée Globe in effect restarted off Rio de Janeiro, Brazil today with the five top boats regrouping within 26 miles of each other in terms of the distance to the finish line in Les Sables d’Olonne.

Charlie Dalin (Apivia) has taken the lead again from Yannick Betaven, the French skipper of Maître Coq IV who lost the biggest leading margin of the race, over 435 nautical miles. But the 48-year-old skipper from La Rochelle has found breeze this afternoon, closer to the Brazilian shore, and is marginally further north than the Apivia sailor.

Dalin, Bestaven, double Parlympic gold medallist Damien Seguin (Groupe APICIL), Thomas Ruyant (LinkedOut) and Louis Burton (Bureau Vallée 2) are compacted tightly off the Brazilian coast, trying to climb into the Easterly tradewinds which are not at all well established at least until the NE’ly corner at Recife.

“The route to the north is anything but clear. Until Recife, the northeast trade winds are unstable, there are bubbles with less wind, and variations in strength and direction. On the water, there must be pressure differences and therefore speed differences between the boats. It is not at all easy,” Sébastien Josse, the weather consultant for the Vendée Globe explained this morning.

And from now to the finish in Les Sables d’Olonne it seems certain the final 4600 miles will be contested with the intensity of an inshore coastal race where every mile counts. And the tiny gaps – there are just 127 nautical miles back to ninth placed Jean Le Cam (Yes We Cam!) – suggest this epic ninth edition of the Vendée Globe may see places decided on a photo finish.

Dalin warned this morning, “Nothing is settled yet, the wind is not at all established in this area where I am sailing. I still see 24 hours of winds which remain unstable in terms of strength and direction. As we are not yet into the more constant wind there are still lots of things going on. I don’t think it will be until Wednesday morning on the early rankings that we will really see things settle a bit.”

He added, “I'm glad I got back into this. Four days ago, I was 450 miles behind. If I had been told then that I would take the lead four days hence I would not have believed it. It is great to have had this opportunity.”

Dalin casts his eye over his title rivals and remarks, “The condition of the boats will matter. I suspect that not everyone is at 100%, no one really is, but who has what? I know what I have: I am handicapped by my port foil. We'll really see what that means when the wind sets in, so don't lets jump to any conclusions right now. We will see if the real performance against these guys is affected. I touch wood, I have no sails problems. I hope it lasts!”

Bestaven, in second this afternoon, said, “It is a complicated day both in the East and in the West. I thought at the beginning that by being more West, I might be the first one to get out, but I can't say, from one weather file to the other, because it changes in all directions.

“I'm here because it’s where I could go with the wind there was in the soft zone. I'm making “small gains” trying to get closer to the direct route. I’ll get back in the race when I have more established winds. The sea is fairly crossed, which shakes up the whole boat and reduces the speed a lot as soon as you fly forwards. Even if I launch off at 5.7 knots, the speed is reduced to 4.3 knots. It's very hot, already 35 degrees this morning, yesterday I had up to 38°C.”

At 0156hrs this morning British skipper Pip Hare passed Cape Horn for the first time. In moderate breezes and relatively flat seas she passed close to the rock and was able to enjoy the best perspective, speaking to the lighthouse keeper and his wife.

The release thereafter for Hare was palpable. She admitted that the 24 hours before Cape were some of the worst of the race, always fighting with an inconsistent strong wind, changing in strength and direction.

She had been kept on her toes by an ingress of water by the bearing seals of the port rudder she replaced and a big broach. But her reward, in the Atlantic today, was a wonderful sail up the east coast of Staten Island, giving chase and actually making miles back on 16th placed Jérémie Beyou who is 88 miles ahead.