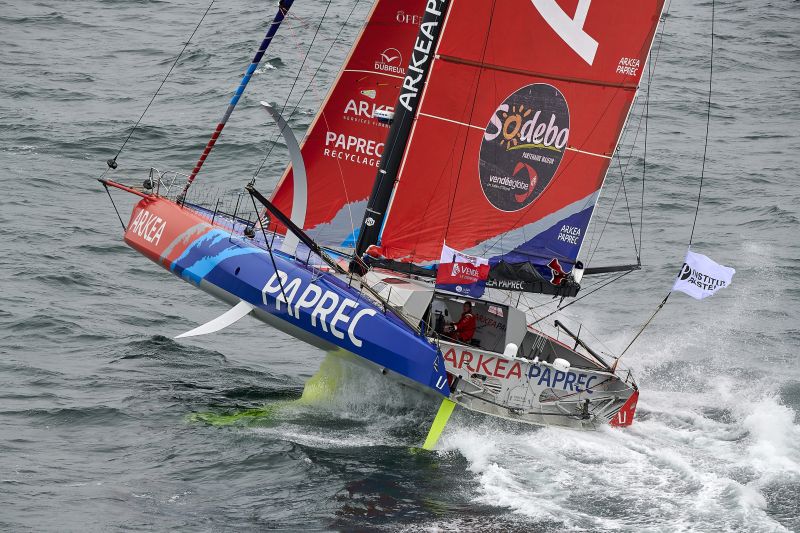 Given that the Vendée Globe fleet started on Sunday 8th November in Les Sables d’Olonne with a record sized fleet of 33 IMOCAs and there are still, technically, 31 tracked on the race course, it is not entirely unexpected to have no fewer than nine boats (and ten skippers) cross the longitude of the Cape of Good Hope today. But this is a unique, unprecedented statistic for a unique and ever more engaging edition of the solo non-stop round the world race.

Passing at 0230hrs UTC this Wednesday morning in fourth place was Sébastien Simon on ARKEA PAPREC. The 30-year-old Les Sablais skipper has been showing good speeds in recent days on the 2020 Juan K design. But no sooner was he into the Indian Ocean than he reported substantial damage to his starboard foil and its casing after hitting an object in the water at 0820hrs UTC this morning.

Simon slowed the boat which had some unspecified amount of water ingress, and had stabilised the situation, this afternoon making between eight and 12kts on port gybe racing towards the back of a low pressure system.

The proven reliability of the 2016-17 race winning boat, now Bureau Vallée 2, and the desire and confidence to attack hard seem to be the key to Louis Burton’s progress up the leaderboard. So far he has routed south, closer to the ice exclusion zone and so sailing less miles but always in stronger winds and bigger seas. The 35 year old from Saint Malo was seventh on the last edition of the race, blessed with a passage through the southern oceans mostly in relatively benevolent conditions thanks to a high pressure system which he rode for weeks.

Rescued Kevin Escoffier and rescuer Jean Le Cam were called by Skype onboard Yes We Cam! by the President of France, Emmanuel Macron who congratulated Le Cam on his seamanship, saying,

“I was reassured by the news. I am a fan of Jean’s. So I wanted to say hats off to him. We are extremely proud of Kevin and you and for the whole ‘family’ and of what you did,” said Macron

It is still planned to drop Kevin Escoffier on a French navy frigate the Nivose which could rendezvous with Yes We Cam near the Crozet or Kerguelens but this has not yet been confirmed by the authorities. If not it might be New Zealand before Escoffier could be taken off.

For all that the latest generation of high speed foiling IMOCAs are designed for top speeds of more than 30kts, now racing in the steep, short seas of the Indian Ocean, race leader Charlie Dalin has been through his biggest storm to date and today said he is having to learn how to slow his boat and manage it.

“I am discovering something I have never had to do before,” said Dalin, “ I have to un-trim, detune my boat. I feel now 50% of the time I am trying to trim the sails and the foils and keel to go faster, and 50% of the time I am de-tuning the boat. I find myself looking for the brake pedal. The sea state in the Indian Ocean is really what is limiting my speed. Sometimes the boat accelerates in the surf and we go to 28-30kts and you don’t know how it is going to end. It is a really weird to way to think, ‘I have this wind strength, this wind angle is this and I have these sails up, and I have the foil set like this, but if I change all these settings I should slow the boat down, and slow the boat down.' I never had to do this before in my racing career.”

With a lead of over 250 miles Dalin admitted today he no longer routes his rivals, Burton tracking 165 nautical miles south of third placed Ruyant, not because he doesn’t care but he considers it wasted energy when they are in different wind regimes, “I have stopped routing them. Entirely. I have voluntarily stopped taking the GRIB files back to Thomas. I cannot do that. I don’t want to know what conditions he is going to have. There is not much point. We have different weather systems, we are a bit more than 12 hours apart, so there is not much point. I focus on my race, my course. And we will see how it turns out. I have given up. I don’t find it useful to do this.””

Damien Seguien, Alpicil: “All is going well and if truth be told the past 24 to 36 hours have been complicated for me. I have quite a few little issues to fix on the boat, so it is going to take a bit of time, but otherwise all is good. The blue skies are back and that boosts morale. I have the past the Cape of Good hope, so first milestone on my Vendée Globe.

“You really have to sail in the South to understand what it is like. The sea is quite rough, and you have to really adapt your sail plan to your boat speed and the sea state because if you just go by the information you get in Europe, you would tend to go with bigger head sails and the full or nearly full main, and really you just can’t accelerate much between waves because you get pushed over. It is not just because of this that I am less fast, but you need to protect your gear, so you have to adapt and really be here to understand.

“The cut I did to myself a few days ago is virtually healed. It was not too complicated to dress as the conditions were calm and I spoke to the doctor and followed his advice, disinfecting the wound and putting the stiches on and cleaning it regularly with dressing changes. It was all very easy, and it has pretty much healed up now.

“You always have your ups and downs on the race, even on the same day and within the same hour. The morale always fluctuates, but we lucky that we have great means of communication on board with WhatsApp, the telephone, video calls so it allows you to keep in touch with your close ones.”

At 1900 UTC Sam Davies (Initiatives Cœur) informed her team that she hit an unidentified object. She is slowly heading north and is inspecting her boat to assess damages. Sam is safe and uninjured.