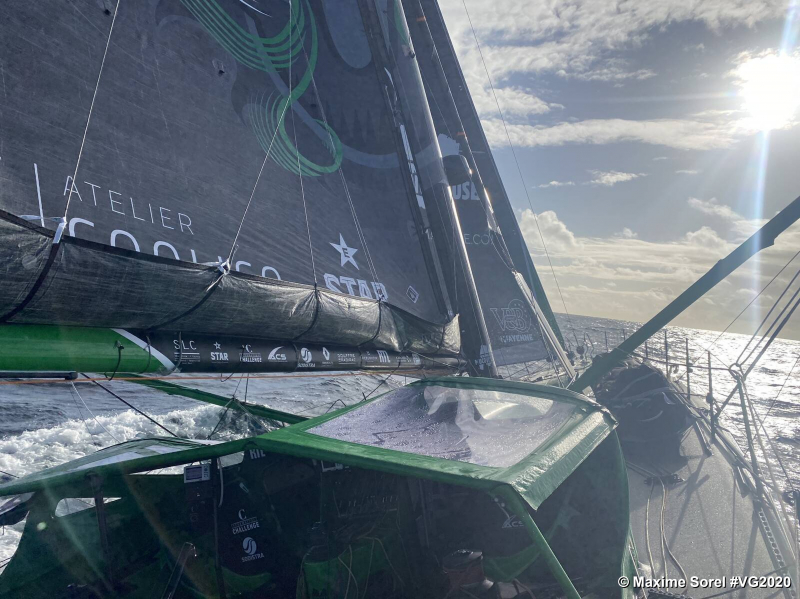 France’s double Paralympic gold medallist and 2017 winner of the Tour Voile Damien Seguin leads the 33 boat Vendée Globe fleet as the early rankings favour a leading group of older generation IMOCAs as they race south westwards across the Bay of Biscay towards Cape Finisterre.

While the fastest latest generation foiling boats worked a more northwesterly route last night and in the first part of the morning, Seguin, Maxime Sorel (V and B Mayenne) and veteran Jean Le Cam (Yes We Cam!) hold a small advantage on the afternoon ranking. But they are expected to lose out as they sail for longer in a north-south zone of lighter winds.

Seguin, who was born without a left hand, has scored successes in pretty much every different inshore and offshore discipline, including Class40, before taking on this Vendée Globe on the boat which Eric Bellion raced to ninth place last time. He has been helped in his round the world preparations by veteran Jean Le Cam, who was some seven miles behind the talented and competitive 41 year old race leader.

After the excitement, indeed for some the sheer euphoria, of finally being on the solo round the world race course, the first full day of this Vendée Globe has offered a few hours of lighter winds allowing the skippers the chance to rest, to take stock, to work through their jobs list and to prepare for a moderately nasty front which will bring strong winds and steep seas during the night of Tuesday into Wednesday.

Nico Troussel on the Juan K designed Corum L’Épargne continues to be quickest of the fast foilers which are racing on the same angle this Monday afternoon some 50-60 nautical miles to the west and making similar speeds in the sunshine and lighter airs in the high pressure ridge.

Troussel, a double winner of La Soltaire du Figaro, was more than seven miles ahead of Britain’s Sam Davies who has been going well on her Initiatives Coeur. Neither skipper seemed to have suffered the first night niggles – small technical problems – which cost miles. Both Jérémie Beyou (Charal) and Alex Thomson (HUGO BOSS) snagged fishing gear on their various appendages. The British skipper had a night-time battle with his J3 headsail when a sheet detached. Thomas Ruyant (LinkedOut) reported he lost 15 miles when a sail unfurled.

“These things are minor just now. In a few days they will look back and think them nothing much but some of them come from not having been sailing for a while” commented Seb Josse on the Vendée Globe LIVE show this lunch time in Les Sables d’Olonne.

Josse has been working closely as a part of a dream team getting Corum ready, trying to ensure the the May 2020 launched design is as reliable as possible,

“We worked a little bit like Alex Thomson, on our own not doing the races but we sailed as many longer race like passages as we could, trying to break things, which we did and repaired them.” Explained Josse.

Speaking of Tuesday’s strong winds the race’s weather expert Christian Dumard reports, “Gusts in excess of 40 knots are forecast with cross seas and waves building to 5 metres on Tuesday night. The whole fleet will be changing tack to head towards the SW in the NW’ly air stream ahead of the ridge of high pressure. Winds will become lighter as they advance towards Spain. For the leaders, it is going to be important to find their way south without getting becalmed in these calmer conditions. The precise moment at which they change tack will be crucial. There is therefore the choice now of diving south with a higher risk of getting stuck in light airs off Spain, along with the disadvantage of reaching the front after those further west, but on the other hand, conditions will be quieter by then. Those who decide to go further west are less likely to be caught in the light airs, but face a more violent front with the risk that entails for their gear. No doubt, they will all be seeking out their own personal compromise between the fastest route, no doubt be tougher on the boat and the skipper and a trajectory to the south, which is likely to be kinder to both.”

Speaking on the live this morning Alex Thomson said “The next big thing will be crossing this front. There is this light patch off Finisterre so I would prefer to be further West, but I am not and then we will be sailing towards the front which will be interesting. Last night I saw 2.5m waves average when we will be looking at 4.5 to 5m waves so my hull fibre optics were getting close to their limits last night. So, I am not sure I am going to belt into this too fast, if I can I will try and get a bit further south and avoid the worst of that.”

Damage at the top of his mast added more frustration for Fabrice Amedeo who is expected to return to the race course tomorrow morning after making a U turn and arriving back at the race dock in Les Sables d’Olonne on this morning’s 0700hrs tide. A fast pitstop has not been possible after effecting the replacement of a gennaker hook (lock) after additional problems surfaced.

See the ranking in full