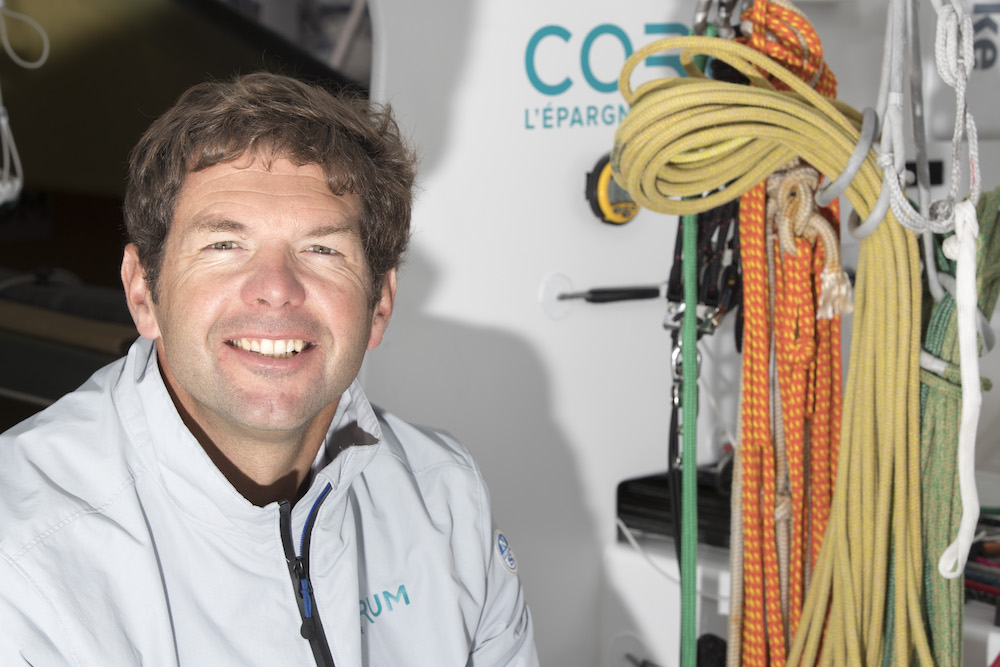 There will be at least eight new generation IMOCAs lining up at the start of the 2020 Vendée Globe says Nicolas Troussel, who in a year from now will be launching his Corum l’Epargne, a Kouyoumdjian designed boat fitted with foils.

Twice winner of the Solitaire du Figaro and the Transat AG2R sailing double-handed with Armel Le Cléac’h, the skipper from Morlaix is turning a dream he has had for a long time into reality by joining the IMOCA circuit and competing in the non-stop solo round the world race.

We met up with him to find out more.

When you were young, you used to sail with Armel Le Cléac’h and Jérémie Beyou in Morlaix Bay. Since then, your two old friends have each taken part three times in the Vendée Globe. You have been dreaming of joining them for quite some time…

“Yes I had to wait a while to get there. I was quite close to Armel and Jérémie in terms of how we were progressing. Then we started to advance at different speeds as we moved ahead. I’m well aware now that I’m joining them in that small group of sailors that is lucky enough to compete in the next Vendée Globe.

“My desire to take part in this race has been with me for some time. I really felt I was capable after winning the Solitaire du Figaro (in 2006 and 2008). I intended to take part as a competitor that would be a serious contender and not just take part to complete the round the world voyage.”

Last year, Corum was your partner in Class40. How did you manage to convince your sponsor to take part with you in the IMOCA circuit, after you were forced to retire from the Route du Rhum?

“The heads of Corum wanted to make sure that sailing was a good means of communication to build up their reputation. The Class40 project enabled them to see how much media feedback there was in such a sailing project. The 2018 season was positive with successful PR operations and good results in the preparatory races.

You’ll be getting a brand new IMOCA. For the 2020 Vendée Globe, four designers are involved. Why did you choose Juan Kouyoumdjian?

“We studied all the options, including the purchase of a good performing second-hand boat. Safran and Hugo Boss were still on the market. We wanted a boat that would be competitive right up until the end of the project in 2022.

“That’s why we decided to build a brand new IMOCA, which also means our qualification for the Vendée Globe is more secure, even if I will have to complete a solo transatlantic crossing on the boat to qualify.

“We studied the various possibilities and in the end decided to work with Juan Kouyoumdjian. I had already been in contact with him and we got on well together. He is ready to give it his all to win the Vendée Globe.”

The management of the project has been awarded to Mer Agitée, Michel Desjoyeaux’s technical team. Why did you choose them?

“To take advantage of Michel’s experience, as he has taken part twice in the Vendée Globe… and has won twice.

“He also worked with François Gabart when he won the 2012-2013 race. He knows all the problems in this race, both in terms of the technology and the sailor. It’s a real bonus having him in this project. He will in particular be helping us a lot with ensuring the reliability of the boat.”

What experience do you have of IMOCAs?

“I did a lot of sailing with Armel Le Cléac’h on Brit Air, in particular taking part on two occasions in the Transat Jacques Vabre in 2007 (7th) and 2009 (retired). I also went out with Jérémie Beyou and was able to see just how physically demanding these boats are.

“I know what I’m in for, but I’m not making a mountain of it, even if the foils change things a lot. I’m going to have to learn how to sail at very high speed. That’s probably going to be the hardest part.”

Your boat will be launched between December 2019 and January 2020, or in other words less than a year before the start of the Vendée Globe. Is getting the timing right going to be key?

“Ideally we’d like to launch the boat as early as possible. But we will have the advantage of getting some feedback from the other new IMOCAs and the problems they have encountered. We will try to plan ahead as much as we can to avoid as many problems as possible after the launch.”

On what boats will you be sailing this year as you wait for your new boat to be launched?
“I’m currently planning my race program and will be announcing it shortly. I can’t say any more for the moment, apart from the fact that the Transat Jacques Vabre is one of my goals…”