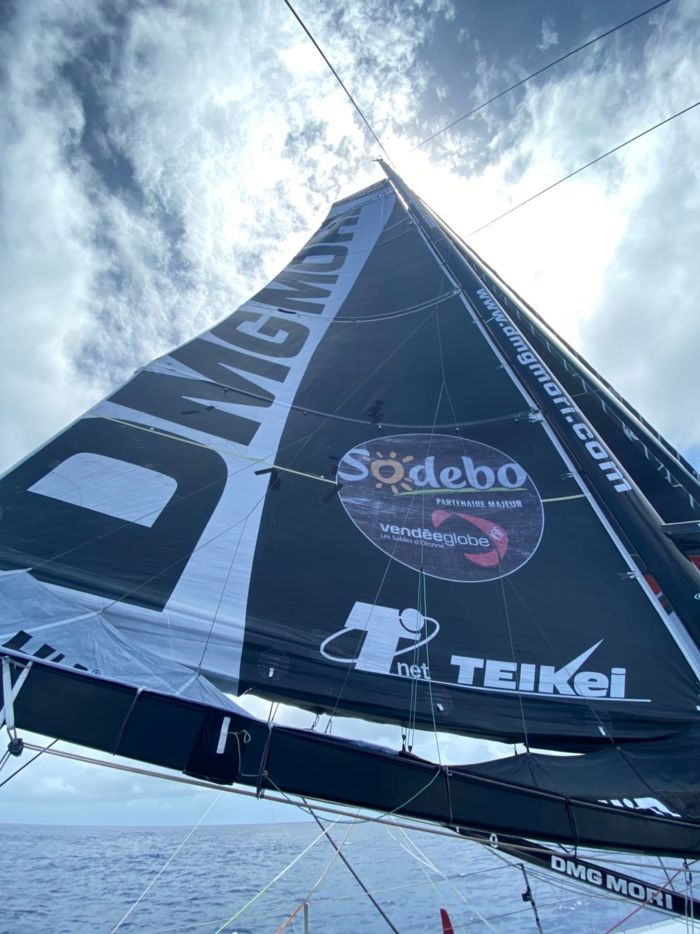 The relative silence from among the Vendée Globe leaders speaks volumes. Increasingly background activities are pared back to only what is necessary as the solo skippers devote all their energies to weather strategy, keeping fast and managing their energy reserves for what promises to be a final push, pressing tired bodies minds and boats to their limit in the pursuit of Vendée Globe victory.

Some skippers have made it be known, after 74 days, they want a few days respite from telling their stories to focus entirely on racing, to remain in the zone. Others like third-placed Thomas Ruyant yesterday showed the stress and frustration of not being able to race the last 2200 miles sprint at full competitive capacity due his missing port foil, while fifth placed Yannick Bestaven – long time leader in the south – is happy to assert that, after repairs to his furlers and other damage, he will be back at close to 100% for the final sprint.

“Thomas is first and foremost a competitive animal who wants to be able to be giving it everything in these final days so it is frustrating to be compromised like this when you are in the heart of the battle. And knowing that the podium positions might be decided on compensated time weighs heavily in his mind. It is not at all easy for him,” Marcus Hutchinson, Ruyant’s team manager observed today.

Bestaven told his team today, “I want to finish in the top five, beyond that I know that the podium will be difficult, but it is still possible. They are not very far in front of me. Thomas (Ruyant, LinkedOut) is in fourth place, not far in front of me, he is handicapped with his foil and I am faster than him; Boris (Herrmann, Seaexplorer – Yacht Club de Monaco) is going fast, he is coming back at Charlie Dalin (Apivia); and there is Louis (Burton, Bureau Vallée) who is fast out to the left, that can be interesting for him if he catches the SW’ly wind first. Everything is open and possible between us, it will be super interesting.”

Bestaven concludes, “The result will also depend on the capacity of the boats downwind, I don't know if everyone will be 100% in these conditions.”

The Maître Coq IV skipper confirmed he is missing his J2 and FRO but still has his spinnaker, a big and a small gennaker and a J3 so he will be much less handicapped downwind. As the same time he issued a reminder how important it will be to stay in the ‘normal’ rhythm as long as possible to avoid burning out before the finish. Considering that the decisive miles across the Bay of Biscay can be downwind in more than 30 knots, a wipe out due to a momentary lapse of concentration could be fatal.

Three times Vendée Globe racer Josse, who sailed the last Vendée Globe on the IMOCA Herrmann is racing, said this morning, “Louis can sneak around the edge and hook into a very localized corridor of southerly wind, it is quite narrow and local, but the slower Louis is the narrower the channel of wind is and the faster he is then the wider it is.”

Josse is convinced though that the skipper of Bureau Vallée 2 is the only one in the leading group to be able to benefit from this.

But Josse adds, “It is important to correlate what is forecast on the weather files and what is happening on the water. There are still clouds, squalls, fronts and rain. You have to be eyes out of the boat, watching what is happening and sailing by feeling. It's on the deck you really see these things evolve.”

Kojiro, the words of a totally fulfilled skipper

“Every day at sea, I am the happiest man in the world.” Talking with Kojiro Shiraishi is guaranteed to be inspirational. The skipper is currently at the farthest point on the globe from his native Japan. And he receives dozens of messages from fans, admirers and those getting to know the Vendée Globe for the first time.

“They all tell me that the name Vendée Globe is now known to everyone in Japan,” says Shiraishi who had to retire into Cape Town in 2016 with a broken mast.“That I am still racing is a miracle as my mainsail tore. I have always been positive but I never thought it would hold out for so long so I hope now it gets to the finish. There is still a lot to do.”

Shiraishi’s DMG MORI Global One is currently in 19th place in the race.