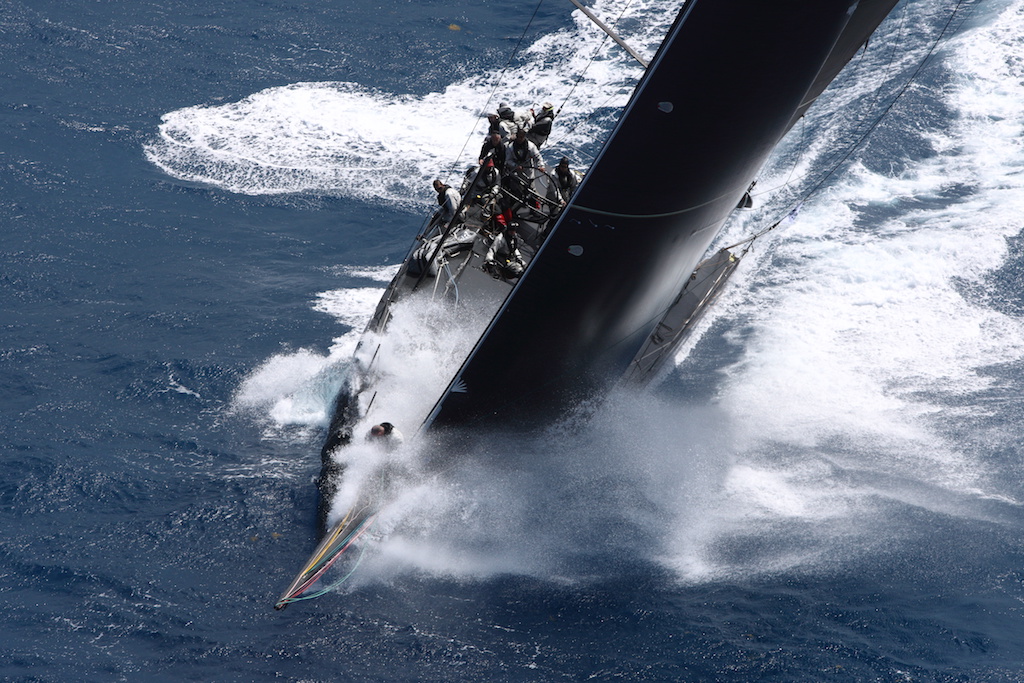 On July 21, 2018, which marks the birthday of Varuna VI's owner and skipper, Jens Kellinghusen (NRV), the Race Committee confirmed that Varuna's overall win of the Bermuda Hamburg leg after corrected time is not at jeopardy anymore. In theory, some boats of the fleet could still win in terms of time, however, due to current conditions and possible maximum speed of these yachts, this is technically improbable. Meanwhile, Teasing Machine scored a third place for the second and final leg of the Atlantic Anniversary Regatta (AAR) from Bermuda to Hamburg. She also participated in – and won – the first leg of the AAR, in November 2017, which took the yacht from Lanzarote to Grenada as part of the 2017 RORC Transatlantic Regatta. Due to her stellar performance in both race legs in 2017 and 2018, Teasing Machine will be awarded the Silver Trophy for the overall regatta. While all overall podium finish positions are taken, the remaining fleet is still battling for group wins in ORC and other categories – all while encountering very light conditions, making the final nautical miles a strenous spurt.

“We are thrilled to win the Bermuda Hamburg Race of the Atlantic Anniversary Regatta”, comments Vasco Ollero, crew member and press officer of Varuna VI. “This might have been the last regatta for Varuna VI, at least with the existing crew and Jens Kellinghusen on the helm. If this was indeed the final journey, it could not have been a better one, winning this 'home-run' to Hamburg, just in time for our skipper's birthday and further honouring his membership in the Norddeutscher Regatta Verein, and the yacht club's 150th jubilee.”

Following a tight 3,500 nautical miles battle, all the way from Bermuda in the West across to the East of the Atlantic and to the North Sea, Ker 56 Varuna had reached the finish line in the early morning hours of July 18 (at 04:48am UTC), with less than one hour difference after the larger IMOCA 60 Malizia – Yacht Club Monaco (at 03:54am UTC). While Boris Herrmann's Malizia and his 4 crew members thereby secured Line Honours and were the first ship home after elapsed time, Varuna's professional crew of 14 is leading the Bermuda Hamburg leg after corrected time.

“The entire fleet started at the same time from Bermuda, but because the boats are not the same one-design and instead come in different forms and sizes, every boat starts with an individual handicap and in different rating groups”, explained AAR CEO Arne Hirsch to a group of curious, young spectators in the AAR Race Village in Hamburg. “Whereas in other sports, the first competitor who crosses the finish line is the winner, this is often not the case in sailing.” Race Officer Stefan Kunstmann adds: “In this regatta, a total of 9 different titles can be won, including the prestigious 'Silver Trophy', which was just won by Teasing Machine, followed by the overall win of the Eastbound, leg from Bermuda to Hamburg, which will go to Varuna.”

Eric de Turckheim's French Nivelt-Muratet 54 Teasing Machine crossed the finish line in third position on the late evening of July 21 (at about 10:13pm UTC) after a bit more than 13 days on the water, reaching a third place after corrected time in the Bermuda Hamburg leg as well. The 54-feet long ocean racer battled with light wind conditions in the English Channel and the North Sea, forcing it to stay very close to shore lines and ultimately losing their temporary second place in IRC Zero to Malizia. Varuna retired from the first leg of the Atlantic Anniversary Regatta (in which Malizia did not compete at all), which took the previous fleet on a shorter, 2,500nm route from Lanzarote in the Canary Islands to Grenada in the Caribbean in November 2017. In this previous leg, Teasing Machine was the overall winner under IRC, winning the RORC Transatlantic Race Trophy at the time. In the overall rating of both race legs, this puts Teasing Machine in the top spot, awarding them with the overall Silver Trophy of the Atlantic Anniversary Regatta.

Next in line on the water after Teasing Machine, are TP52 Rockall and Swan 441R Best Buddies who are sailing in the North Sea, less than 300nm away from the finish line in Cuxhaven. Both have sailed an impressive race in their own right: Best Buddies started in a separate division, six days earlier than the remaining fleet. Despite racing on the same route as larger and professional high-speed machines, Best Buddies has been overtaken by only four boats so far. In the ORC rating system, Rockall V with her skipper Christopher Opielok, is once more showing an immaculate performance, and leading in front of ISKAREEN and Haspa Hamburg, both on the water and after corrected time. Whilst within mobile reception near Dover, Opielok revealed that his crew are fighting problems with their electronics and communications equipment, who may have been damaged during an early knock-down near Newfoundland. With limited access to weather forecasts and other information, they are using their experience to sail like in the old days – using 'Mark I Eyeball' to assess clouds, the wind and the sea to design their strategy and tactics. At present, that appears to pay dividends, as Rockall blasts through the North Sea, ahead of the Race Committee's projections by 15 nautical miles when most other boats lag behind their projection by a mile or two.

Whereas Malizia and Varuna had the inherent speed potential to stay with the wind systems of ex-Hurricane Chris, which propelled them across the Atlantic Ocean at high speeds, the remainder of the fleet was overtaken by it. They are now left with the lighter winds between a high-pressure system to the West of the Azores, and a relatively weak low-pressure system over Iceland. In addition to that, the first two finishers had the benefit of a low-pressure system to the East of Scotland, which sent them downwind across most of the North Sea in good winds – neither one had to tack even once after leaving Bermuda. The boats presently in the English Channel are fighting their way through extensive ridges, with very light and variable conditions, requiring utmost concentration every second of the day. All the while, the boats still on approach to the Channel are running downwind in the Azores High at very good speeds. By Monday noon, we may see a development of another weak high-pressure system which may provide some more downwind conditions with good breeze down the English Channel and the North Sea, bringing with it some breeze and relief for the remaining boats.

Following the excitement on the water, spectators and organizers on shore are in great anticipation of the remaining fleet's arrival. After crossing the finish line in Cuxhaven, all yachts will continue their voyage and make their way down the Elbe River to urban city metropolis Hamburg. Once in the HafenCity, they will moor in the AAR Race Village in the Sandtorhafen, next to Hamburg's iconic Elbphilharmonie. AAR yachts will be on display for a marina viewing from the shore of the AAR Race Village from July 19 until 29 (Mondays to Fridays from 12:00pm – 08:00pm, Saturdays & Sundays from 11:00am – 08:00pm).

Regular updates of all results are available at http://anniversary-regatta.com/notice-board/results.html

The public is invited to join for an exciting series of events, which include:

In addition, the AAR Facebook Live video show “Logbuch” (“Logbook”) will be produced onboard the AAR Race Club Ship Seute Deern in the centre of the Race Village every day at 06:00pm local time, and arrivals of individual AAR yachts are expected almost daily, further adding to the exciting fleet exhibited in the Sandtorhafen during the event period. Entry to the AAR Race Village is complimentary.