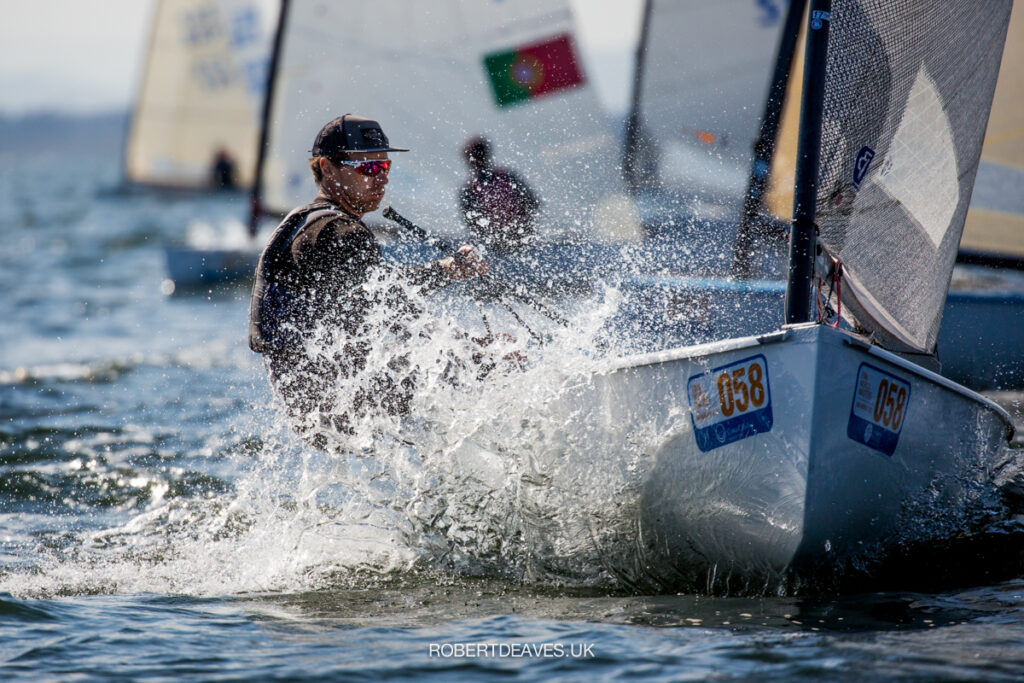 Valerian Lebrun has won the 2021 Finn World Masters in Spain with one day to spare. Pic - Robert Deaves

Another day of light winds at the 2021 Finn World Masters. Pic - Robert Deaves 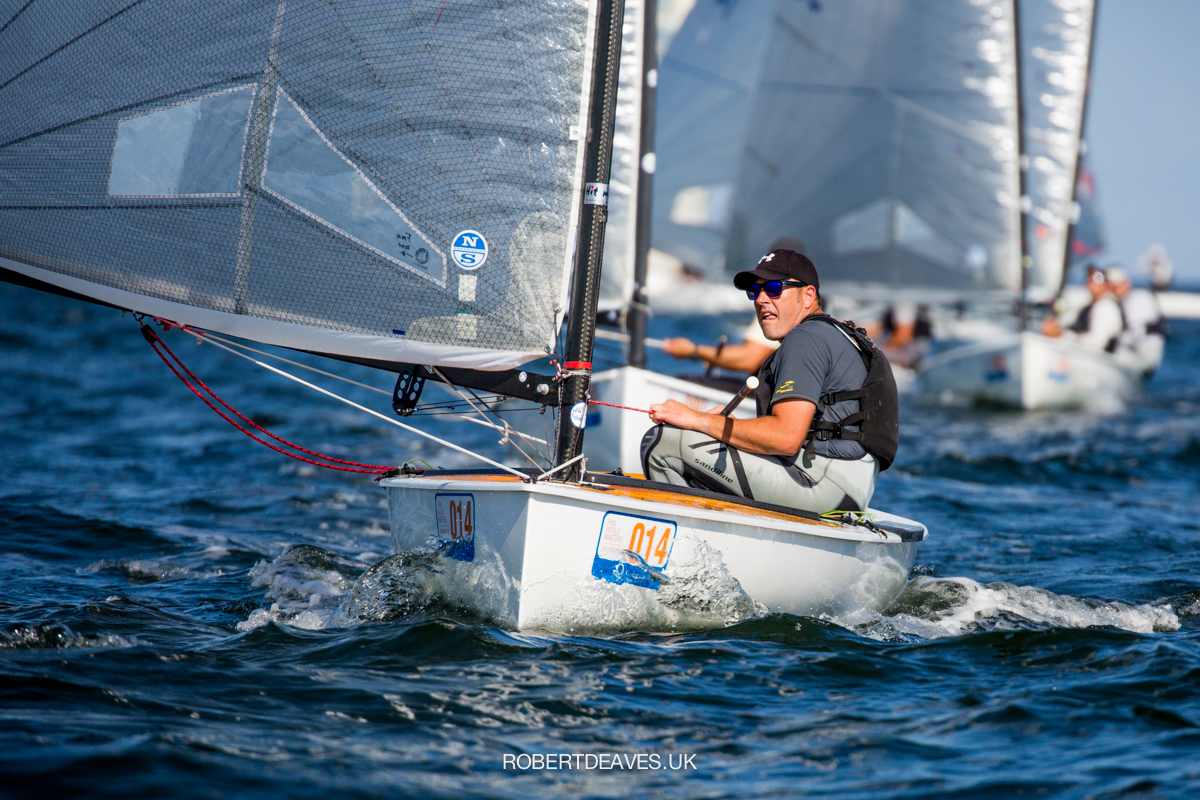 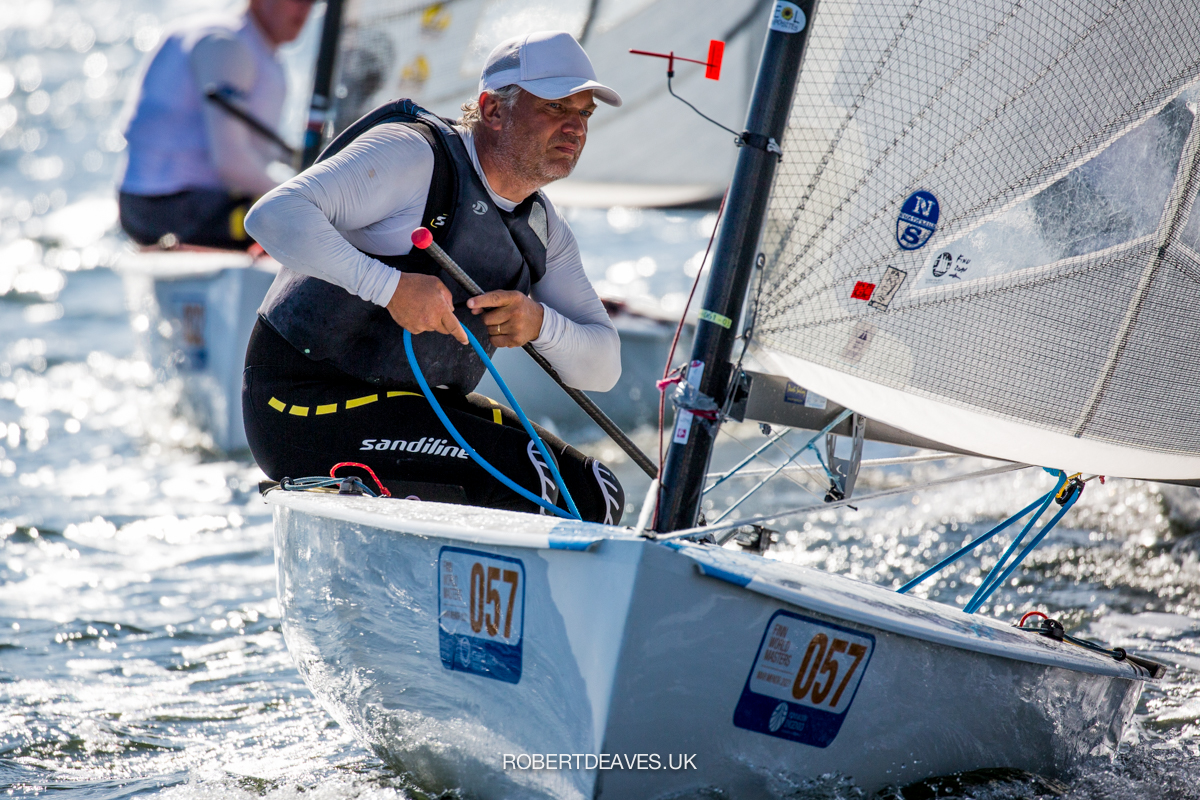 The fourth day of the 2021 Finn World Masters on Mar Menor in Murcia, Spain produced yet more great racing, with Valerian Lebrun, from France, securing the title with a day to spare.

He takes an insurmountable 17-point lead into the final day. Filipe Silva, from Portugal remains in second with Spain’s David Terol in third. The race wins on Thursday went to Terol and Lebrun.

Another postponement ashore was raised to wait for the wind, which duly arrived around 1400 and gradually built through the afternoon, topping out at about 8-12 knots by the end of the second race. The sky was blue and the air was hot, but the competition was even hotter.

Under a black flag start, Xavier Penas, from Spain was fastest to the top mark in race six, but the race turned into a battle between Terol and Lebrun. Terol got the advantage on the second upwind to lead down to the finish to take the win from Lebrun, while Álvaro Ballesteros Martínez De La Cámara, from Spain, crossed third.

The start of race seven also went to black flag with several casualties. However, Lebrun had found his legs and led all the way to win by a big margin and take his first Masters world title with a race to spare. Laurent Hay sailed a great race to take second, while Silva took third.

Paul McKenzie had mixed results on day four. The Australian cam 50th in race six, but recovered in race seven to come away with sixth place. Fellow Australian Anthony Nossitier, who has been unlucky with two black flags in the regatta, is coming 30th overall following his 28th and 7th on day four.

Some of the age categories are really close going into the final day. While Lebrun also has the Masters trophy sown up, the Grand Masters is led by Laurent Hay, from France. Peter Peet and Bas de Waal, from The Netherlands are close behind, so the title will be decided in the final race.

Could it be any closer in the Grand Grand Masters, with just 11 points separating Greg Wilcox, from New Zealand, who has led all week, Marc Allain des Beauvais, from France, and John Greenwood, from Britain? Hats Fatzer, from Switzerland, has taken the lead in the Legend category while Richard Hart from Britain has already secured the Super Legend title.

Overall, while Lebrun has taken the championship, the remaining top 10 is still to be decided, and with six boats carrying letter or high scores, it is long way from being decided.

No one here has had any doubts about the long drive to Mar Menor. The racing has run on schedule and has been great, the weather has been superb, the water has been clean with fish swimming around your feet as you launch, the hospitality has been awesome, the parties have been memorable, the beach has been desirable, and the free beer has gone down a treat. There is just one day left of what has been an amazing Finn World Masters.

Racing concludes Friday with one final race to settle the top 10 and the age categories. The forecast is for more light winds.