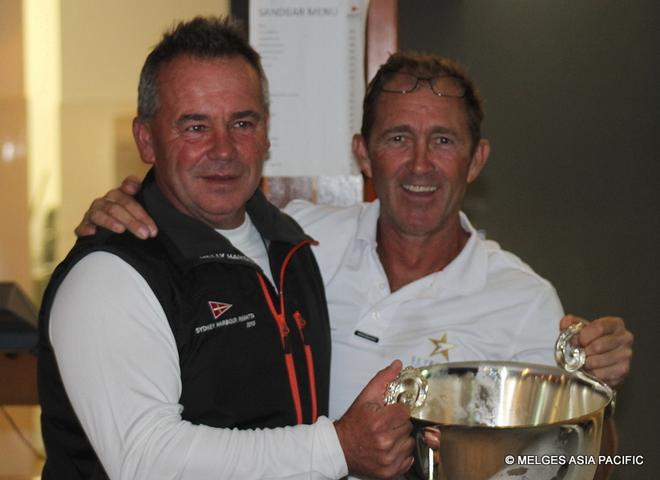 We were deeply saddened to hear of the passing of respected Tasmanian sailor and friend, Greg ‘Enzo’ Prescott.

A champion across a variety of classes, Enzo raced in 29 Sydney Hobarts, his first in 1980 as a 17-year-old aboard the family’s Half Tonner, Hotshot. At 9.1 metres, it rated as one of the smallest boats in the fleet. The following year he skippered Hotshot to seventh place overall in a fleet of 159 boats – the fourth largest fleet in the race’s history and he became the second youngest skipper in the race’s history, having just turned 18.

Enzo joined the ranks of those on the ’25 Hobarts’ board (designed, built and donated by Tasmanians) in 2009 when he raced on the Reichel/Pugh 62, Limit. In 2018 he returned with his own yacht, a modified Farr 40, 2 Unlimited, the signature name of the variety of boats he owned.

In between, Enzo did the race on prominent yachts such as Matika III, Police Car, Yendys, Ausmaid, Ichi Ban 52 and Wild Rose.

Enzo couldn’t wait for the day when his son could join him for the race. It finally happened in 2019; Lachlan had turned 18 in January that year. Enzo was as proud as punch. That year, 2 Unlimited placed 22nd overall for second in Division 4. He was not entered for the race this year, instead concentrating on other sailing projects.

The Tasmanian was ‘the one to beat’ in races on home waters. In 2020 he won Division 2 of the 2020 Australian Yachting Championships, hosted by Royal Yacht Club of Tasmania, where Enzo was a member. Later in the year, 2 Unlimited cleaned up the 2020 Bruny Island Race, winning all four handicap divisions and took line honours in the 2020 TasPorts Maria Island Race, which it also won under IRC and AMS.

Around his offshore racing exploits, the Hobart property developer was a dab one-design sailor, particularly in the SB20 and Melges 32 classes. He won at state and national levels with his ‘2-Unlimited’ boats.

With his mate and crew over many campaigns, Darren ‘Twirler’ Jones, Enzo was inducted into the Tasmanian Yachting Hall of Fame in 2016.

Above all, Enzo was one of sailing’s genuinely nice guys. As such, he had many friends in the sailing fraternity, was always pleased to see you with a ready smile and loved to catch up with mates he hadn’t seen in a while. And he loved his sailing.

Enzo’s funeral will be held at St Joseph’s Catholic Church, 165 Macquarie Street on Monday November 8, at 13.30 hours. Should you wish to view the service remotely you can access the livestream at https://www.millingtons.com.au and click on EXTERNAL Live Stream. COVID health directives apply.

Greg Prescott will be greatly missed. Our sympathies go to his family.