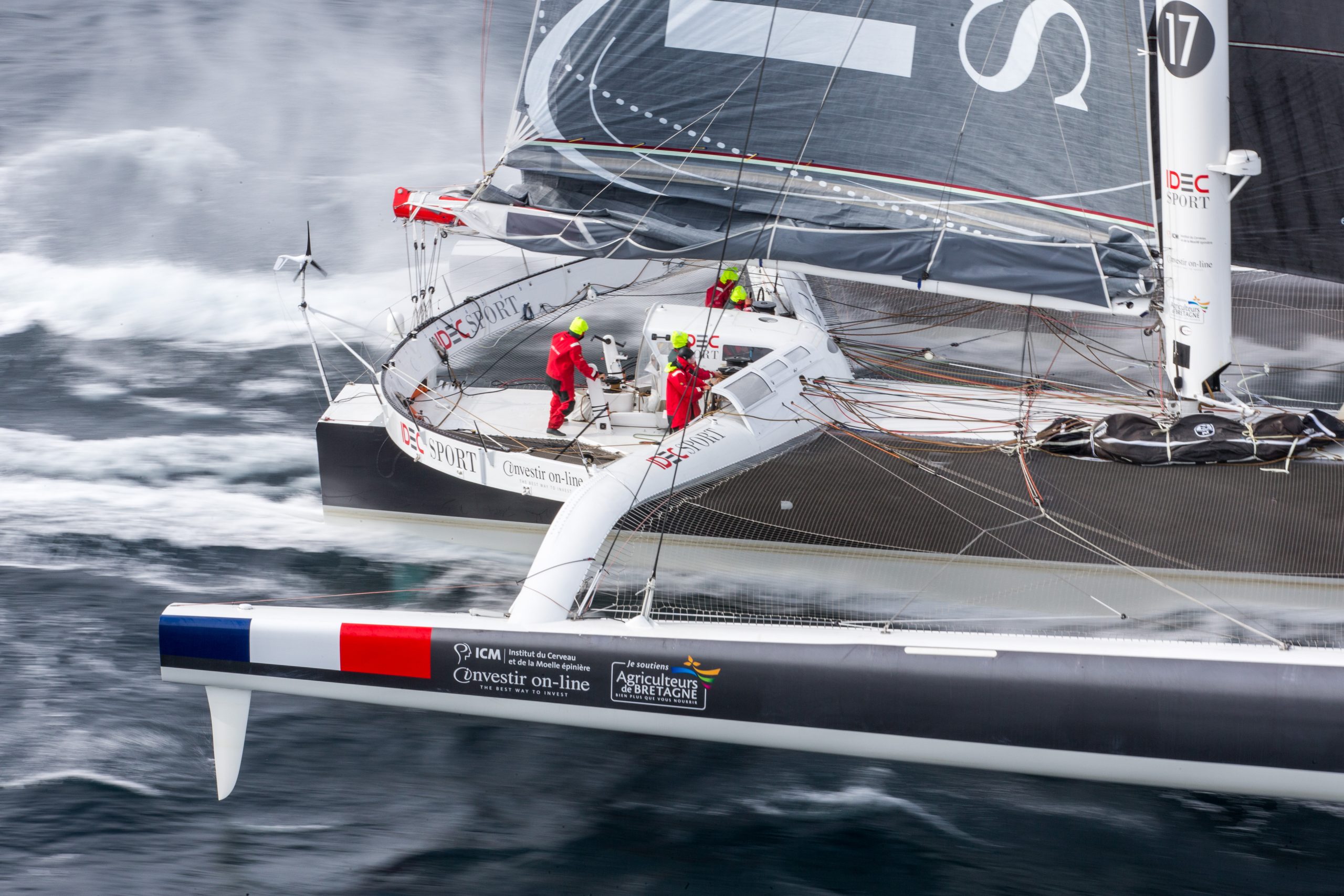 The Idec Sport maxi-trimaran has completed the first half of the round the world voyage.

It will be around 1800hrs UTC that they will have sailed the 11,160 theoretical miles representing half of the total distance between Ushant and Ushant via the three major capes, Good Hope, Leeuwin and the Horn. Joyon and his men swallowed up this first half at an average speed of 24.2 knots. In reality they have sailed 13,200 miles out on the water, at the incredible average speed of 28.7 knots.

At the start of their nineteenth day of racing, as they approach New Zealand, this performance places them 1060 miles ahead of the title-holder of the Jules Verne Trophy, Banque Populaire V. As they begin to tackle the world's biggest ocean, the Pacific, there is a strange problem for Joyon and his band of soldiers. How can they slow down a boat that is eager to speed across the ocean? They need to look after the boat and there is the fear of going faster than the low-pressure system and ending up in calms. This today means that Joyon, Audigane, Pella, Surtel, Stamm and Gahinet are reining in their machine.

“We have set up a system rather like the points on your licence,” joked the Catalan Alex Pella. Tossed around by a nasty swell hitting the boat side on for the past 48 hours, Francis Joyon's crew have to put the brakes on their IDEC SPORT maxi-trimaran. “It is something of a paradox,” continued Francis. “We are trying to smash speed records, but in the past 48 hours, we have been trying to find ways to slow the boat down and look after her.” The unprecedented performance of the VPLP designed boat from 2005 must not stop us from thinking about the violence of the elements, which after 19 days, including eight at unprecedented speeds, has led to some breakages, albeit superficial ones. “The plexiglass screen at the helm did not resist a breaker,” explained almost matter of factly Francis Joyon. “We had to set up a replacement panel to protect the helmsman,” added Gwénolé Gahinet.

The nasty swell which was hitting the side of IDEC SPORT has now shifted to behind the boat. “Today, we have a very good wind angle with the breeze still at around thirty knots and the seas pushing us along from astern. The helmsman is not getting as wet and the movement of the boat is more comfortable than over the past couple of days,” stressed Francis. All lights are on green, in spite of the many little matters that the crew have to deal with and the start of the huge Pacific is a continuation at the same amazing speeds that they have been keeping up for nine days. “We are dreaming of Cape Horn, and the climb back up to Brazil,” said the youngest member of the crew, Gwénolé Gahinet. “A little bit of sunshine and warmth would do us good.” However getting to the Horn takes a lot of hard work. Francis Joyon thinks there will be a relative slowdown in the Pacific with a series of manoeuvres and gybes to weave in and out of the systems on the edge of the ice zone. This will be a welcome breather, allowing them to carry out a few repairs and inspect the boat.

After Leeuwin, just two days ago, it is the reference time from Ushant- Tasmania to the SE of Australia, which was smashed in the middle iof last night and taken away from Yann Guichard and Dona Bertarelli's Spindrift 2 maxi-trimaran by Joyon, Pella, Surtel, Gahinet, Stamm and Audigane. The new time is 18 days, 18 hours and 31 minutes replacing the previous time of 20 days, 4 hours and 37 minutes set last year by the world's biggest racing trimaran and a crew of fourteen.