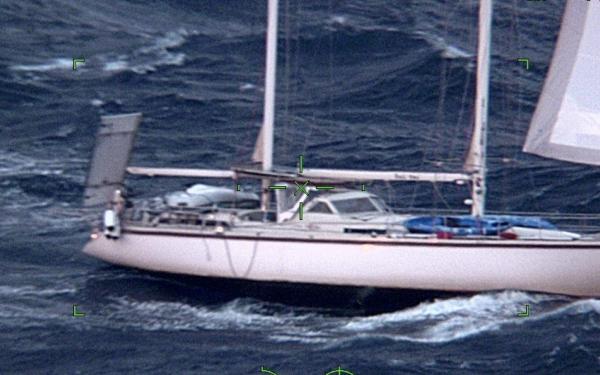 Two yachties were rescued from this vessel after they lost engine power. Photo US Coast Guard.

The captain of the sailing vessel initially informed IERCC watchstanders that he had activated his emergency position indicating radio beacon after the vessel's engines had lost power and was concerned about staying aboard due to rough weather and high seas.

Once on scene, the Jayhawk aircrew successfully hoisted both boaters from the vessel and safely transported them back to Air Station Elizabeth City.

“We cannot stress enough how critical it is to have a properly registered EPIRB,” said Chief Petty Officer Charles Reaves, a watchstander at the Coast Guard 5th District Command Center. “While having an EPIRB aboard your vessel is important, having it accurately registered allows rescuers be able to determine your location and information in an emergency situation more quickly. The fact these boaters had this equipment, were trained on it and used it properly directly lead to an accurate and timely response.”