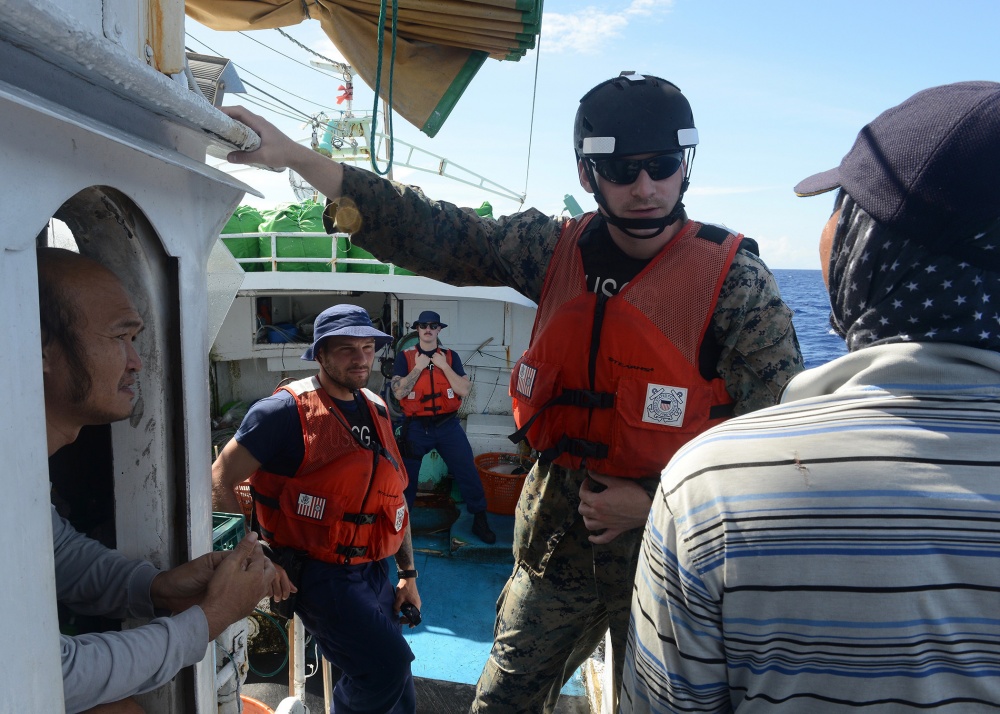 A marine law enforcement boarding team from the Coast Guard Cutter Washington (WPB 1331) conducts an at sea inspection of a fishing vessel off the coast of Palau. Photo by Petty Officer 3rd Class Matthew West

IUU is a collection of dishonest fishing practices threatening the sustainability of fish stocks worldwide. Here in the Pacific, IUU presents a dire threat to many communities who rely on sustainable fish stocks for their nutritional and economic benefits.

“The Coast Guard’s IUU Fishing Strategic Outlook outlines the Service’s efforts to combat the scourge of IUU fishing over the next decade,” said Adm. Karl Schultz, commandant of the Coast Guard. “We are committed to working with our allies and like-minded partners to strengthen the international fisheries enforcement regime and counter this pervasive threat. As a recognized world leader in maritime safety, security and environmental stewardship, the Coast Guard has a responsibility to help build a coalition of partners willing to identify and address IUU fishing bad actors and model responsible global maritime behavior.”

The Coast Guard works closely with our local, regional, and international partners in the Pacific to combat IUU through enforcement of measures established by the Western and Central Pacific Fisheries Commission (WCPFC), missions assisting our allies with protecting their Exclusive Economic Zones and participating in joint operations like the recent Pacific Quadrilateral Defense Coordination Group’s Operation Nasse.

The Coast Guard has been the lead agency for at-sea enforcement of living marine resource laws for more than 150 years. The Coast Guard will continue to lead global efforts to build a multilateral coalition to detect and deter IUU fishing on the high seas and in the exclusive economic zones of partner nations in order to disrupt the corrupt cycle of influence that enables illegal operations.

Working with our partners in the National Oceanic Atmospheric Administration, the Department of State, and the Department of Defense, the Coast Guard will advance a whole-of-government effort to promote economic prosperity and drive stability, legitimacy, and order in the maritime domain.