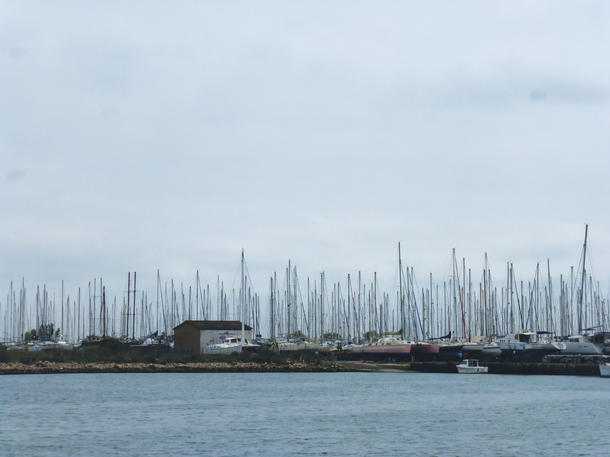 The scene at Port St. Louis

We all have a dream. We wanted to circumnavigate the world and part of that dream was to go through the French canals in our own yacht.

In 2009 we finally found the yacht we were looking for in New Zealand. It is a Whitby 42 centre cockpit, with a ¾ keel and a relatively shallow draft of 1.5 metres.

In 2013 we left Australia and sailed our way across to Europe. Our plan, after limited research, was to enter the French canals at Port Saint-Louis near Marseilles. Then motor our way up the Rhone, into the Soane at Lyons then onto the Marne through the champagne region and thence to Paris.

We would exit the canals into the English Channel at Le Havre. From Le Havre, we would sail along the Normandy coast of France to the Channel Islands. Then onto the United Kingdom for our winter stopover.

When we arrived at Port Saint-Louis du Rhone we were met by tens of hectares of boats on hardstands all in various conditions. We were told by friends that a sign of French affluence is to own a boat but it is not necessary to get it wet, unless it rains of course. So these sailing boats can spend years on the hard.

Requirements for going through the canals

Requirements for going through the French canals are a maximum draft of 1.8m, a maximum beam of 5m and air draft maximum of 3.5m. So our mast and gear had to be removed.

As we had had our boat resprayed in Thailand we were very keen to not have any encounters with concrete walls in the locks, so more fenders were required. The best idea is to try and make the boat square, so we bought four large balloon fenders for the bow and stern then placed fenders every one and half metres along the sides. As well as having a barge board on each side.

We also needed to buy a Peage Plaisance, which is a license to allow a boat to traverse the canals. The only options are for either one month or for one year. We chose one year for our 13m yacht, it was about A$450.

We were also required to obtain a French Inland Waterways Navigation license which can be taken online and is mostly standard international collision prevention regulations; with a few quirky ones that you will only experience in the canals. For instance, if you see a massive commercial barge, which on the Rhone can be 200m long and 10m wide carrying 96 shipping containers, showing a blue square on the starboard side, forget port to port, it is starboard to starboard as these big barges need the whole river to get around some of the bends.

Preparation for the canals

Thankfully at Port Napoleon at Saint-Louis they are extremely well versed in mast removal with permanent on-site cranes and skilled operators.

The mast was out and laid on a cradle in under an hour. The next choice was whether to get the mast transported by road transport or to carry it on deck. We are keel-stepped and our mast is five metres longer than the boat, so it cost about AU$2000 to get the mast removed, wrapped in copious amounts of bubble wrap and transported up to Le Havre by road. However, it has given us lots of clear deck space, which is important for getting around the boat quickly in those locks and it has taken away the worry of damaging our mast, rigging and radar on the way through.

After a couple of days of the obligatory boat maintenance to ensure our engine would not let us down, we were looking to enter the Rhone canals. Luckily a few days earlier, we had met a Swedish couple Lena and Goran who were taking their yacht home via the canals. Goran had made a spreadsheet which, after downloading the flow rates of the Rhone River in cubic metres per second, transformed it into a figure we could all understand: i.e. the flow rate in knots.

When we first started looking at the flow rate the Rhone was flowing at seven knots, but after five days it got down to three to four. We can cruise at six to seven knots so we had a chance.

The first lock was so easy it was ridiculous, lifting us only about 0.5m.

We then entered the Rhone proper and soon learnt to take advantage of the inside curve in the river to try and reduce the effects that the current was having on our speed over the ground. Sometimes, on nearing a lock when
the hydroelectric gates were open, we would get down to 1.5 knots.

The following twelve locks on the Rhone were much more challenging; the biggest had a rise of 23m which was filled in seven minutes. A lot of very turbulent water pushing our boat every which way.

These big locks, 220m long and 10m wide, have a rising bollard so the technique that worked for us was to attach a bowline and a stern line to this central bollard.

The helmswoman was able to keep our yacht parallel using the motor, sometimes with all 80 horsepower being employed in either forward or reverse. I do not think it was so bad for the barges as they have a flat bottom, but a keeled yacht really gets pushed around.

After leaving the Rhone, the locks are much more civilised, often only rising or falling three to four metres and are a lot smaller, generally 5m wide and 45m long.

Always a nervous time but being reunited with our mast in Rouen, it was great to see Maggie Drum whole again.

We spent a day unwrapping our mast, attaching some new spreaders.

The next day with careful help the mast was lowered back into place. Two days later, with the electrics reconnected, we were ready for the open ocean again.

Has it been worth it?

Well, I could ramble on about the wonderful French countryside, the friendly people, impressive chateaux, the great food, fantastic wines, being able to leave a vase of flowers on the table and see it still there in the evening, I can already hear the catamaran sailor saying we can do that, but then they cannot go through the French canals.

For me it is getting up in the morning and looking down a wonderful valley from on board our ocean going yacht, then launching the bike to go and get a fresh baguette, all before 10 o clock. Seriously though it is a unique experience, especially for ocean going boaties, to traverse a country or countries through a well-maintained European canal system with no thought as to the effects of wind, tides or anchorages.