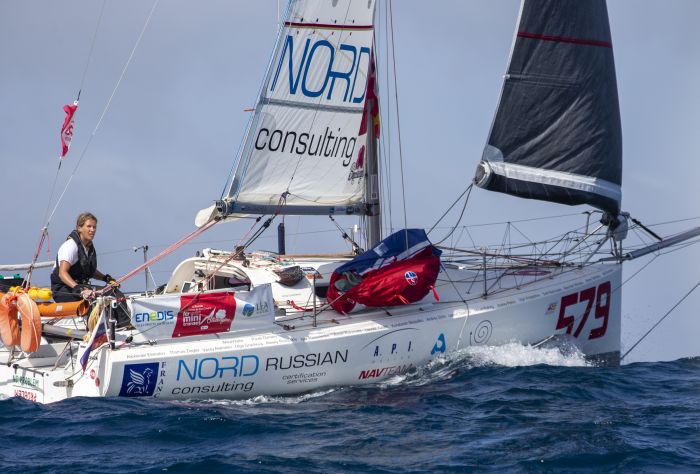 François Jambou (865) in the prototype category and Ambrogio Beccaria (943) in the production boat fleet are still utterly dominating the competition. Earlier this morning, Russian sailor Irina Gracheva (579) and Julien Berthélémé (742) both announced to Race Management that their boats had dismasted. Otherwise, all is well aboard for both skippers, who are still in the race for now. These two dismastings are the first to occur since the start of this 2019 edition of the Mini-Transat La Boulangère.

The sailor from the Finistère region in NW France (742) has broken his mast level with the spreader. He’s indicated his intention to continue on his way for now under jury rig. The same is true for the Russian competitor Irina Gracheva (579), who is not requesting assistance and wishes to sort out a jury rig on her own and continue her race. At the 16:00 UTC position report, they were respectively 1197.5 and 1,163.7 miles from Le Marin in Martinique.

The trade winds are certainly no picnic

Despite the generally accepted idea that it’s just a long session of slipping along downwind in the sunshine from the Portuguese coast to the West Indies, in race format it’s a very different scenario. Indeed, the sailors have to contend with a shifty wind in terms of strength and direction, short seas accompanied by a big chop and unpredictable winds of 30 to 40 knots that have a tendency to catch the skippers out under the cover of darkness. The upshot of all this is ideal conditions for wipe-outs. To get a better idea of this, you just have to look at the zigzagging trajectories on the cartography and the competitors’ sudden dips in speed. This second leg may not have the nasty conditions you might expect in the Bay of Biscay, but it is no less demanding or backbreaking for the skippers whose piloting skills are really put to the test. In fact, it wouldn’t be a surprise to learn that once the competitors make landfall in Martinique, conversation will quickly turn to the numerous and epic wipe-outs…

After more than nine days of singlehanded sailing in the trade winds, the state of human and material wear is beginning to weigh heavy. In addition to the navigation and the race strategy, the sailors are having to double up their efforts in terms of remaining vigilant and cautious as the fatigue, solitude and pressure mount. Perhaps the same cannot be said for Erwan Le Mené (800) in the prototype category or Nicolas D’Estais (905) and Pierre Le Roy (925) in the production boat category however. Indeed, with a very slight edge over their direct rivals in the battle for a spot on the podium, these particular sailors must be glued to the helm, allowing themselves precious little rest.

The fatigue is also extending to the Mini 6.50s now of course. This is evidenced by the two dismastings suffered by Irina Gracheva (579) and Julien Berthélémé (742) this morning. However, a number of other competitors lament their own technical woes. Anne Beaugé (890) currently has spreader issues. The support boat Yemanja also reports that Thomas D’Estais (819) is in the process of repairing a rudder fitting that has pulled out and Thomas Gaschignard (539) has had to repair his helm and a cracked rudder. Meantime, the support boat Tea, reports that Jean-René Guilloux (915) lost the pin on the rigging screw attached to a stay last night but fortunately he’s managed to replace it with another on the boat. Finally, Race Management received an alert saying “Technical problem, I’m OK” from Simon Tranvouez.

Tired of bringing up the rear of the ranking, Christophe Noguet (744) decided to plunge southwards and this daring option might well pay off enabling him to pick off a few of his rivals before the finish in Martinique. For his part, Sébastien Liagre (589) has sailed nearly 1,200 miles on starboard tack. Finally, on the first of the boats that is neither a Pogo 3 nor a Maxi 650, Kévin Bloch (697) has made a break for glory among the pointy bows to secure 17th place in the production boat fleet this Monday evening.

Accessing the Mini Transat from… Italy

It has to be said that there is often a very solid Italian contingent who seem to just love to participate in this Mini-Transat La Boulangère race. This year is no exception with no fewer than seven Italian candidates –  two with prototypes and the remaining five on production boats. In the former group we have Luca Rosetti and Matteo Sericano. The former is currently 15th and the latter is sadly now retired after a fantastic performance at the cutting edge of the prototype category prior to breaking his rudder, repairing it and then hitting a UFO that definitively put him out of the race yesterday with a severely damaged keel.

Of the Italians in the production fleet, we cannot fail to mention the top boat with a current lead of 85 miles, sailed by Ambrogio Beccaria, who has come achingly close to overtaking the lead prototype at various points along the course and is posting a flawless performance once again. Behind him, compatriot Daniele Nanni is in 25th place, Luigi Dubini in 46th and Marco Buonanni in 58th. We chat to Alessio Campriani in 56th place who is representing the Circolo Velico Centro Italia sailing centre.

“Many years ago I used to track the progress of the skippers in the Mini Transat as I just find it so inspirational. However, where I live in Perugia, Italy, there were no good organisations to help you train specifically for this race unfortunately as I couldn’t get to Barcelona or the Atlantic coast. As such, all this was but a dream for me 15 years ago, and it seemed too far away for me to access, what with work, life and every other excuse!

“Then in 2013, I was particularly inspired by one of the youngest skippers to compete in that year’s Mini Transat – my compatriot Michele Zambelli, who has a determination that moves mountains. He was from Rimini, which isn’t so far away from my mother’s seaside home, so I said to myself well, I’m old to do the Mini but I want to try!” he smiles, a twinkle in his eye. He is only 51 after all!”

Following his own Mini Transat campaign, Zambelli opened a training hub in the Adriatic Sea, which has been proving to be a popular way for Italian sailors to come together and train. Campriani jumped at the opportunity to begin his own Mini project at last. Interestingly, there were an impressive seven Italians competing in the Mini Transat the year of Zambelli’s Mini campaign (2013), one of whom has steadily increased the size of his yacht ever since his fabulous 2nd place in the race. Indeed Giancarlo Pedote is due to complete the Transat Jacques Vabre on a 60-foot non-foiling Imoca tonight European time, in what is an important step forward in his bid to do the Vendee Globe 2020. Leading the Mini-Transat 2019 from beginning to end in the production boat category, it’s exciting to ponder where Ambrogio Beccaria will go from here…

So how has Alessio Campriani got to the point where he is now able to confidently sail a steady race throughout this 2019 edition of the Mini-Transat La Boulangère? “With Zambelli’s support, I bought myself a Pogo 2 for this project and I’ve essentially been participating in all the races I can that make up the Mini circuit. I’ve been on the circuit a little longer than some, I believe I started in December 2016. Initially it was a big shock to arrive in the Mini circuit. I have a background in sport and I’m a banker and I thought what on earth have I done! But once you get to know people you realise that actually we’re just one big group who share the same passion. Everyone has their own individual goals but if you need something you just have to ask and vice versa so the feeling within the class is great.

“It’s so beautiful when you race in events like the Fastnet or the Transgascogne, and especially the solo events, that there is always someone to embrace you when you finish. It’s nice to be 1st, 2nd or 3rd but the important thing is that you arrive and you’re fine. In this race, particularly at my age, I’m just racing against myself really. I don’t have a high-powered, modern boat or the energy to go for the win, but the important thing is to be in the competition and to try to sail a beautiful race. I have an anxious character so setting sail on this race is terrible for me in some ways, but the moment you’re making headway on the sea and you can see that you’re going along nicely, then it’s just wonderful to be alone in the boat.”

For those Italians wanting to train for this race in Italy, the key Mini training centres in Italy are the Centro Italiano Vela Altura (CIVA) in Tuscany in the Tyrrhenian Sea, an initiative run by Marco Nannini’s (2nd in the Global Ocean Race for Class40) sports association founded in 2012, the first Italian centre geared towards offshore sailing, and the Tribu del Vento Offshore Sailing School in Rimini on the Adriatic coast. Wherever you train though, Alessio Campriani’s journey to this Mini-Transat La Boulangère 2019 is sure to inspire sailors from all walks of life and any age to just get out on the water and follow their passion…