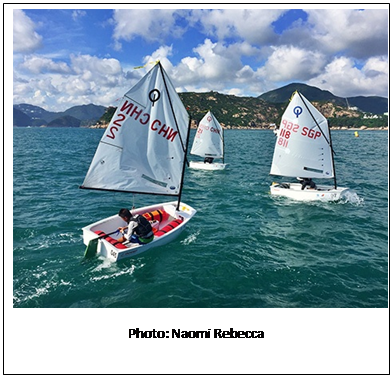 Today sailors made their way to the Royal Hong Kong Yacht Club's Middle Island clubhouse for Day 1 of racing. Hong Kong brought out blue skies and 5 to 10 knots of breeze. The first day saw three qualifying races with the race track positioned off of Stanley Bay and the Optimists sailing a classic Optimist Worlds course.

An easterly course was set for Race 1 with 5 to 10kts being reported across the track. The Yellow fleet set off with only one OCS. First place went to China's Dingjie Shen CHN111 followed by Jinhuan Yu CHN 11 with third place going to Hong Kong's Lumiere Ng HKG313 of Hebe Haven Yacht Club.

There was a general recall for the Blue fleet in Race 1 and once the black flag was raised the second start was clean. Hong Kong’s Duncan Gregor HKG205 of Royal Hong Kong Yacht Club took first place in Race 1.  Duncan placed 9th in the 2017 Optimist Worlds in Thailand. He was followed by Thailand’s Intira Panpiboon THA 945 and Patcharee Sringm THA 112.

The breeze increased for second race to 8 to 10kts. Race 2 saw two general recalls for the Yellow fleet with 8+ boats being black flagged. In the end Race 2 went to Colman Schofield  USA 20956, 2nd Demir Dirik TUR 151 and Jedtavee Yongyuennarn THA 168 in third.

The breeze dropped to 6 to 8kts for Race 3 and became a little shifty, however both fleets got away cleanly. The fleet took a little longer to get to the first mark but once around the mark the wind increased allowing the fleet to finish in the 50 minute target time.

Principal Race Officer Ilker Bayindir summed up the day's conditions. “Today’s wind conditions were not so promising at first; it was all the time shifting, shifting, shifting but the main direction was 090. Three races for Yellow and Blue fleets were completed with great success with only one protest attempt.  Everyone was happy because of the conditions and especially because of the performance of the race committee, who all day long changed the positions of the marks.  All the time the sailors had to adjust to the tidal conditions pushing them parallel to the starting and finishing lines but the conditions were still great.”

Hong Kong's Race Officer Charlie Manzoni commented on the upcoming conditions “The forecast is to weaken a little bit tomorrow and then to pick up again on Wednesday.  One of the forecasts I have seen for Wednesday shows about 20kts.  It should be an awesome event and I hope everyone enjoys it.”