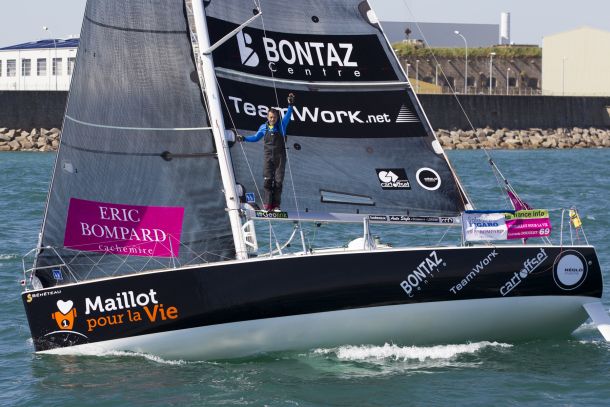 Arriving in Cherbourg. Photo A Courcoux.

With four months to the start of the 46th La Solitaire du Figaro – Eric Bompard Cachemire, 20 intrepid Figaro skippers have signed up to the 2185 mile, month long solo offshore race. Kicking off on the 31st May from Bordeaux (France), as many as 45 solo skippers and their 33ft Figaro Bénéteau II's are expected to race from the grand city of Bordeaux to Sanxenxo (Spain), Concarneau La Cornouaille(Concarneau – France), Torbay (Torquay – UK) and across the final finish line in Dieppe (France) in July.

Widely known as the unofficial world championships of solo offshore sailing and as a training ground for quadrennial solo round the world race the Vendée Globe, the annual Solitaire du Figaro is a race for everyone – from offshore rock stars looking to hone their skills, to the determined ‘Bizuths' looking to make their mark. This year's early entry list is already evidence of the Solitaire's universal appeal, with registered entrants ranging from race champions and Vendée Globe winners, to talented regulars chipping away at the top 10, rank outsiders and ambitious first timers.

Triple Solitaire du Figaro winner Jérémie Beyou (Maître Coq) (2005, 2011, 2014) returns to the race in 2015 not only to defend his title, but also with an aim to become the first skipper to have ever won the Solitaire four times.  Winner of the race in 2012 and 2013, race favourite Yann Elies (Groupe Queguiner-Leucémie Espoir) was gunning for a hat trick in 2014, but it wasn't to be. Dismasted in strong winds rounding Fastnet Rock, Elies was cruelly put out of the running for the top spot in Leg 1. On the entry list for 2015, Elies is back to claim his long overdue triple crown.  Another former race winner (1989), offshore legend Alain Gautier (Generali) made his return to the Figaro in 2014.  The only Vendée Globe winner yet to register for the 2015 edition, experienced Gautier is ready to do battle in the Solitaire arena.

Separating the race favourites and Figaro freshman is a group of talented competitors back year on year, edging ever closer to the top. Until 2012 Yann Elies was consigned to this group, taking him 13 Solitaire du Figaro attempts to realize his dream and stand on top of the winner's podium. Boasting multiple leg wins and impressive overall results, these familiar names and faces are never far away from leader and are at home in the top 10. True to form, Gildas Morvan (Cercle Vert), Thierry Chabagny (Gedimat), Adrien Hardy (AGIR Recouvrement) and Corentin Douguet are back for another crack in 2015, along with last year's race runner-up Corentin Horeau (Bretagne-Crédit Mutuel Performance). Thrust into the limelight in 2014, Horeau is back in the fray and stronger than ever.

Greener than most, but armed with an abundance of talent and determination – the Solitaire du Figaro underdogs are not to be underestimated. Twenty-four year old British skipper Henry Bomby now on his fourth Solitaire, 2014 Rookie favourite Sébastien Simon (Bretagne-Crédit Mutuel Espoir), Vincent Barnes (Guyot Environnement), Laurent Pellecuer and winner of the Transat AG2R and top Rookie in 2014 Gwénolé Gahinet(Safran-Guy Cotten) all hail from this category – the next generation of winners. Doing it for the girls are Isabelle Joschke (Generali-Horizon Mixité) and Claire Pruvot (Port de Caen-Ouistreham) – both very capabale sailors at home in the waters between Bordeaux and Dieppe, France.

Finally, the Solitaire du Figaro would not be what it is without the coveted ‘Bizuth' division. Making their debut on the Class Figaro circuit in 2015, five ambitious Rookies have signed up for this epic solo marathon so far. Five Frenchman Marc Pouydebat, Martin Le Pape (Ovimpex-Secours Populaire) Benjamin Dutreux (Team Vendée) and Benoît Mariette are joined by the first ever Turkish entrant, Tolga Pamir (Un jour un home un arbre) who moves from the Mini 6.50 to the Figaro class. Also joining the fleet but not yet on the list, the Artemis Offshore Academy will contribute as many as three of its talented UK brood to the Rookie fleet. This year British Rookies Rob Bunce, Andrew Baker and Robin Elsey are out to earn themselves a place on the start line. This decision will be announced in May.

The Solitaire du Figaro entry list – as of 31st January 2015