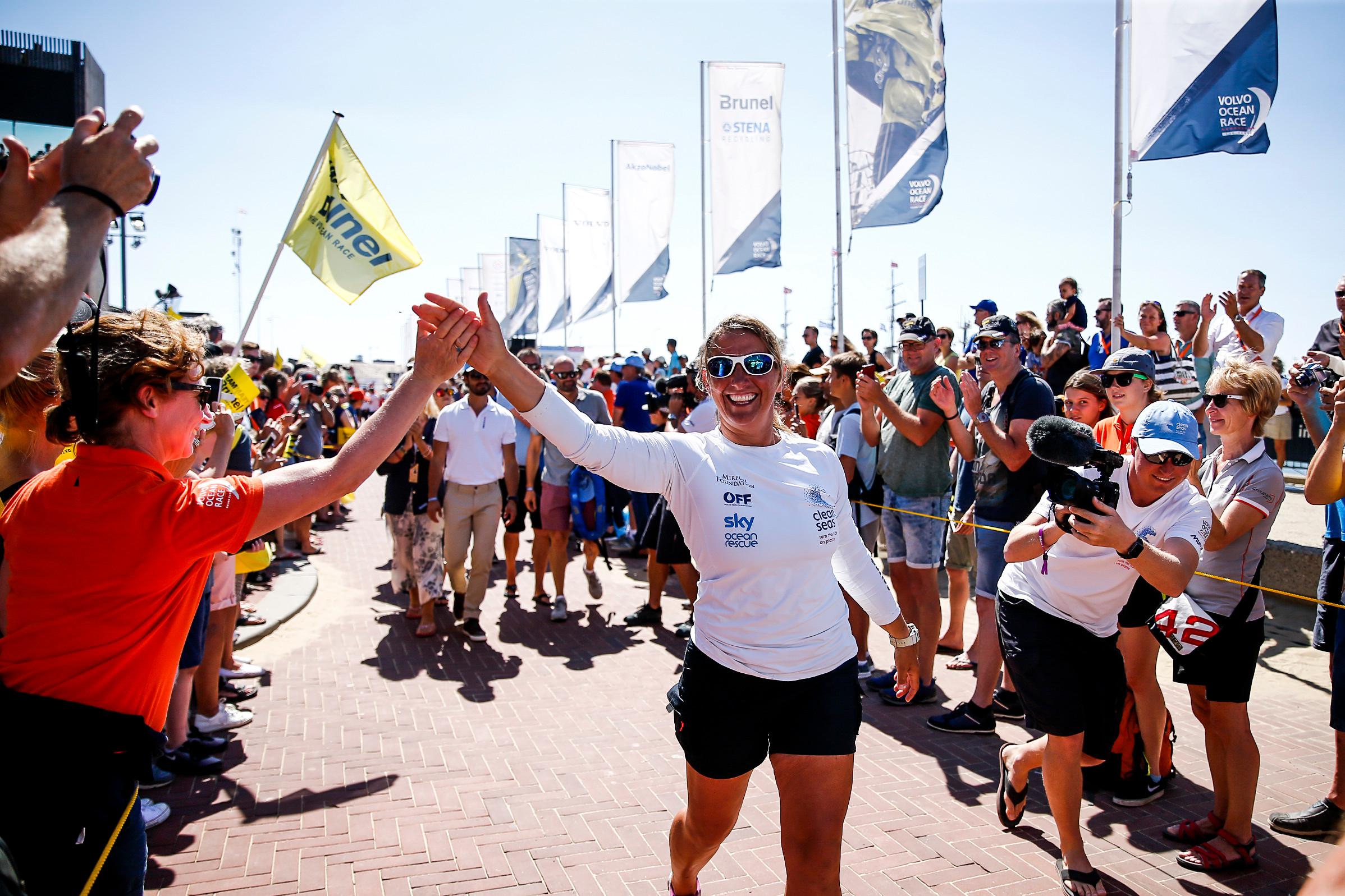 It took until the final In-Port Race, but Dee Caffari’s Turn the Tide on Plastic moved off the bottom of the race leaderboard on Saturday, after securing sixth place in the Volvo Ocean Race.

The day started with SHK/Scallywag and Turn the Tide on Plastic sharing equal points on the overall race leaderboard.

The tie-break mechanism is the finishing position in the In-Port Race Series and there, David Witt’s Scallywags held the advantage by a three-point margin.

But if Caffari could level the score or get ahead on the In-Port Series leaderboard, then her team would lift themselves into a sixth place finish overall by winning the tie-break.

A lot of things would need to go right for Caffari, and incredibly, it all came to pass.

It didn’t look good early when Turn the Tide on Plastic was penalised for not keeping clear of team AkzoNobel on a close cross. But at the next mark rounding, Scallywag hooked onto the mark, and was stopped while the rest of the fleet sailed past.

Eventually they freed themselves from the mark, but by then they were well behind and running out of time to catch up.

The last place result for Scallywag, combined with a hard-fought fourth place finish for Turn the Tide on Plastic, means Dee Caffari’s team sit in sixth place for the first time in the race.

“We had a good race, we even took a penalty today. But we had very good boat speed, made some good calls, and thankfully there were a couple of boats between us and Scallywag,” an overjoyed Caffari said.

“It’s the best way to finish the campaign for us. We’ll all go away knowing we had some good finishes and were able to come back. People didn’t know if we could do it, but we have, and it’s just rounded it all off to finish like this.”

That wasn’t the only scoreboard move on Saturday. Hometown hero Bouwe Bekking’s Team Brunel had a perfect start and led the race from beginning to end.

That win, combined with a third place finish on Saturday by team AkzoNobel, means the two Dutch skippers finished tied for third in the In-Port Race Series, with Team Brunel taking the tie-break for the final podium spot by virtue of a better finishing position in the final race.

“We are really happy of course, not just for ourselves but also for the Dutch public. To have us winning and team AkzoNoble come in third you can’t ask for much more than that,” Bekking said.

“It’s nice to finish racing here where I started my career sailing offshore. Very happy to finish it this way, and thankful for all the support here.”

For Bekking, the race victory puts a stamp on a career that has included eight editions of the Volvo Ocean Race. It was a fantastic day for the Dutch sailing hero to take a win.

The Brunel In-Port Race marks the last competition in this edition of the Volvo Ocean Race.
Announcements concerning the next race can be expected shortly.

* Should there be a tie on the Overall Race Leaderboard at the end of the offshore legs, the In-Port Race Series standings will be used to break the tie.

** Should there be a tie on the In-Port Race Series leaderboard, it will be broken in favour of the team with the better result in the final race.