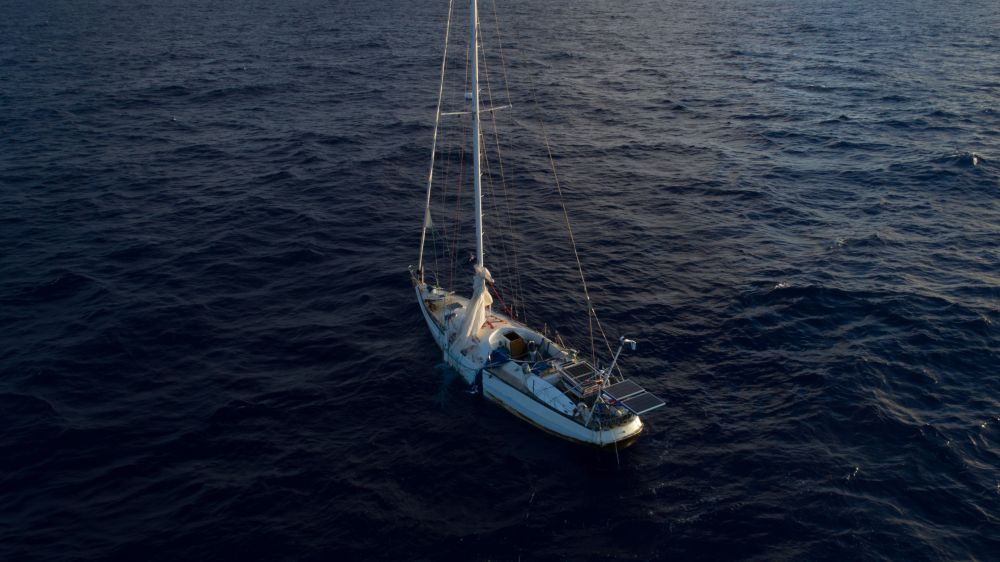 In October 2017, two sailors from Hawaii and a dog were rescued by the US Navy from their cruising sail boat, 'Sea Nymph', 1000 miles off the coast of Japan after drifting at sea for nearly five months in their damaged boat, and abandoning their vessel in the process.

Four months later, Turn the Tide on Plastic, a boat competing in Leg 6 of the Volvo Ocean Race from Hong Kong to Auckland, had a close encounter with the abandoned vessel, which remains afloat and adrift in the Pacific Ocean.

Turn The Tide on Plastic came across the Sea Nymph on Tuesday morning UTC, about 360 miles east of Guam providing this drone footage and first-hand blog of what they saw.

Turn the Tide on Plastic skipper Dee Caffari sent the following blog post on the incident:

“What should you do when you see a yacht floating with no of signs of life? Well that question was asked onboard Turn the Tide on Plastic yesterday.

“We were sailing within sight of Brunel and to weather we saw another yacht close to our track. We looked through the binoculars as there was no sign on the AIS software and we contacted race control. We called on the VHF with no response and race control confirmed there was no active SAR in the area. We sent up the drone with James, our on board reporter, for a closer inspection and to get some identification for the vessel.

“We collected some images and sent them back to race control and they confirmed the vessel was the abandoned vessel, Sea Nymph. Many may remember a big news story in the US, last autumn, regarding the rescue of two women and a dog from the vessel on their way to Hawaii. Well this was that vessel all these months later. She was sitting pretty low in the bow and her mainsail was washed over the side but the rest of her looked like she would make a nice cruiser.

“We discussed salvage rights for a while and estimated that the race director would not give us redress if we towed her to Auckland while racing. So there she sits a hazard to shipping, a risk to islands, reefs and atolls and slowly not going anywhere.

“We are grateful we saw her during the day as this could have been a very different story had we come across her at night. She was floating stern to us with no lights or signal being given out, there is no way we would have seen her. ]

“I just hope now we have given authorities her position there is a chance for salvage or for scuttling her to prevent a far worse disaster in our oceans. We are asking you not to litter the oceans with plastic and here we have a whole yacht floating aimlessly in our oceans!”

Dee and Team Turn the Tide on Plastic