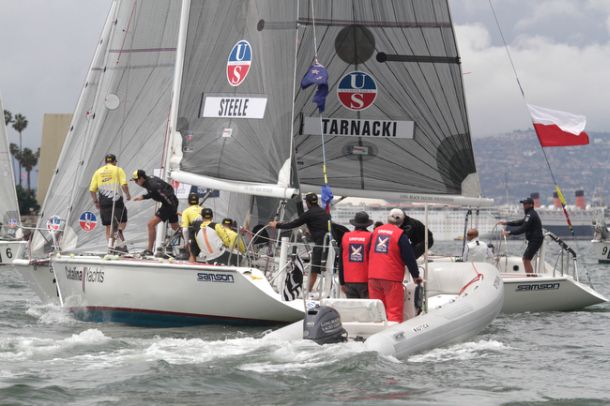 Long Beach, California, USA (14th May 2015): “It never rains in Southern California … it pours, man it pours,“ goes the 1972 hit song (when the Congressional Cup was already seven years old). And today in Long Beach, it poured. A rare storm system swamped the race course on Day Two of the 51st annual Congressional Cup regatta, the opening World Championship event of the 2015/16 World Match Racing Tour.

PRO Randy Smith’s Race Committee were able to complete just two flights, in westerly breezes from six to nine knots, before the rain arrived. It swallowed up the container ships anchored in the distance, then obliterated the course in a white-out forcing a postponement to the racing.

When they resumed, the wind had shifted dramatically to the right. A light breeze from the northwest diminished until spinnakers were drooping, finally becalming the fleet in the lee of the storm.

Said Tarnacki, “We are happy with the two points we got today; the first one we’ve won against Taylor Canfield,” he revealed. “It’s good to have a win, after yesterday,” – when the Polish team was 0-6. “I wasn’t devastated, but a win is good for your head;  it takes the edge off.” Returning to the Congressional Cup after an eight-year hiatus, he said the team was determined to “keep learning, and push very hard.”

Robertson attributed his pace to that fact that he’s having “a lot of fun” – something that was quite evident at Wednesday night’s press conference, where he celebrated his 29th birthday in a get-up evoking the love-child of PeeWee Herman and Hello Kitty. “That’s a big part of it, you have to enjoy yourself,” he laughed.

The Congressional Cup is hosted by Long Beach Yacht Club, with racing held off the Belmont Veterans Memorial Pier. The pier offers superior viewing, with tented seating, vendors and live commentary. Races begin each day around 1130 PDT; The Race Management team, lead by Randy Smith, expects to finish the Qualifying double round robin on Saturday and advance to the semi-finals and finals, concluding on Sunday 17th May.